Closing time for Sav-Mor Liquors sign
The company is moving its flagship to a spot in Assembly Square, and is giving up the large marquee where they’ve long posted humorous sayings to the delight of customers. Luckily, they will keep up the shenanigans on a much smaller sign at their new location. 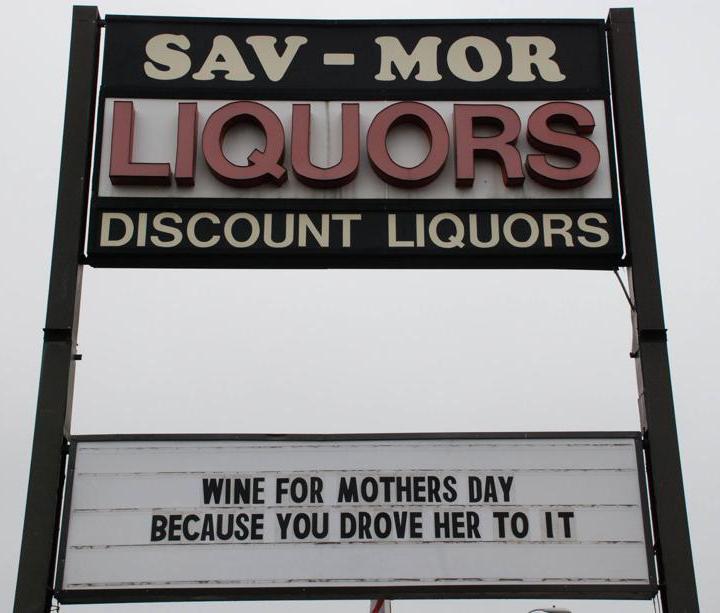 Sav-Mor Liquors is relocating from the Somerville-Cambridge border to Assembly Square.

They’ve waded into the conversation about vaccines with a dash of humor — “We have enough shots for everyone,’’ one sign read — and offered people advice on how to deal with their families during the holidays. (It’s liquor).

But after more than a decade of lighting up a drab stretch of McGrath Highway with waggish messages on its large marquee, Sav-Mor Spirits is moving to fancier digs.

Last week, the company announced it would be vacating its space on the Somerville-Cambridge border, and relocating to Assembly Square, about three miles away.

Although relocating to Assembly Square is a sound business venture, he will certainly miss the massive sign board, which he has treated as his own personal canvas.

“It’s sad to lose the sign,’’ said Weiner, who came up with the idea to put funny sayings on it about 15 years ago. “I guess it’s a mixed sentiment.’’

Weiner said he doesn’t know what will become of the Sav-Mor marquee on McGrath, but he suspects it will eventually come down if and when new buildings go up on the lot.

“We discussed, kind of, if we should do something with it — but I don’t know what,’’ he said. “It’s too big even if a fan wanted to take it or something. Sadly, it’s probably just going to get destroyed.’’

Although Sav-Mor Spirits has other locations in Cambridge, Medford, and Malden — some of them with their own signs — none of those marquees are as large and renowned as the one along McGrath, where droves of motorists pass by on their commute.

A welcome distraction for people stuck in bumper-to-bumper traffic, the sign had become an institution, even inspiring people to dress up as it for Halloween.

The company once gave customers a shot at showing their funny side and held a contest soliciting suggestions for sayings to appear on the board. Of more than 125 entries, the winner came from Kristin A. of Somerville, who suggested the sign read, “This Is Th Winning Swpstaks Ntry,’’ poking fun at the missing e’s in the store’s name.

Perhaps its most notable moment in the spotlight came when the liquor giant dueled with the Golden Arches.

In 2016, Sav-Mor entered a friendly sign battle with the McDonald’s directly across the highway. The back-and-forth lasted at least a month, and the faux-feud between the two businesses went viral as they tried to one-up each other. (Weiner relaunched the harmless banter in May, but it didn’t last quite as long).

The news of Sav-Mor’s relocation — and loss of its original sign — was met with disappointment on social media from longtime fans.

“So many great memories. Good luck in your new location,’’ one person wrote on Facebook.

“I’m really going to miss driving by this sign on my way to work every Saturday. Who will you have sign wars with now?’’ another said.

But Sav-Mor said they plan to keep up the shenanigans at their new home in Assembly Row, with Weiner once again behind the quips and puns. Get ready, nearby stores; you might be next.