‘A grand, unfolding work’
‘I follow an intuitive sense of space and color,’ says the painter, who last summer bought a castle in Great Barrington to add to his collection of estates. ‘They’re like artworks of mine.’ 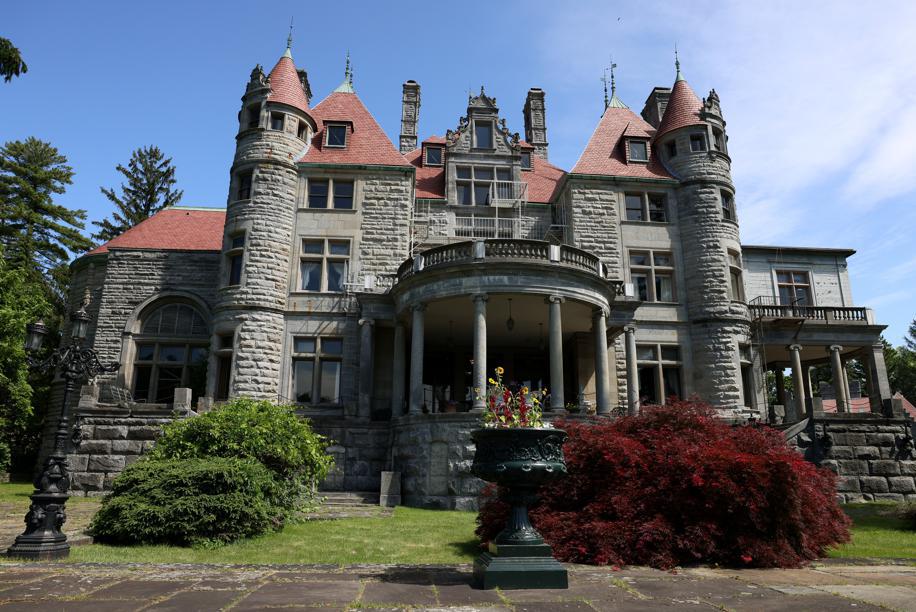 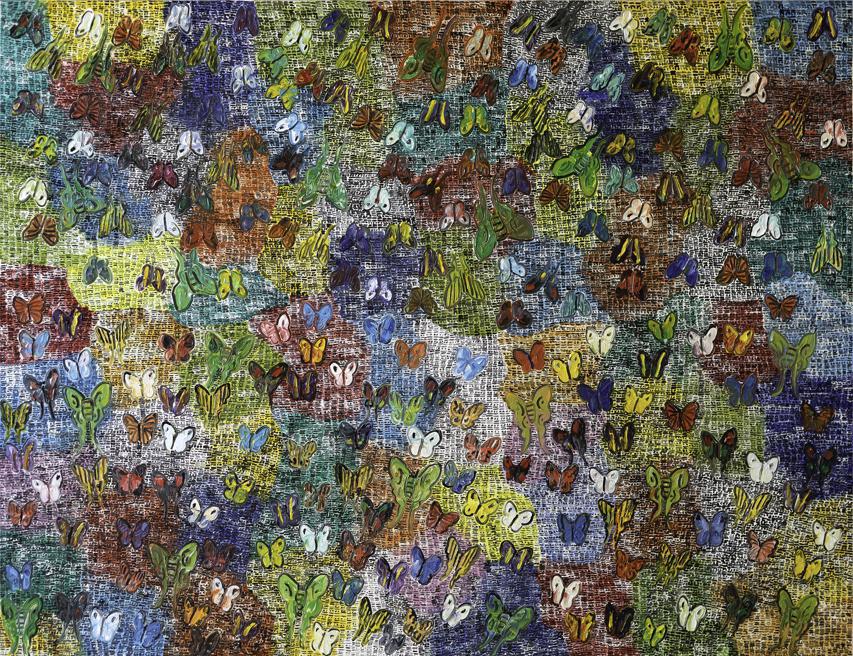 From top: Hunt Slonem’s Great Barrington estate; Slonem’s “Double Butterflies Guardians’’; a detail of the handprinted ceiling inside the French room; the artist’s initials in one of the mantelpieces in the castle. 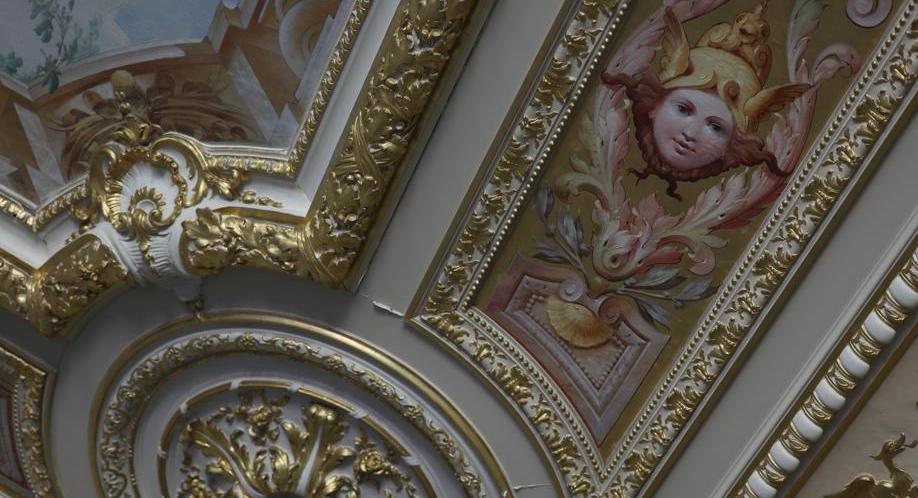 GREAT BARRINGTON — “Once I see something I love, I can’t release it from my mind,’’ painter Hunt Slonem said.

Even — or maybe especially — if it’s a castle. Last year, the Brooklyn-based artist bought Searles Castle in Great Barrington. Designed in the 1880s by Stanford White of McKim, Mead & White in the French Chateau style, it’s an audacious example of Gilded Age tastes.

“The scale, the details,’’ Slonem said. “Just the door knocker almost made me faint.’’

Slonem, a prolific painter who shows internationally, has work in eight exhibitions in July and August, including in museums in Lithuania, Germany, and Latvia, and he is represented in Boston by DTR Modern. He grew up middle class, the child of a Navy officer and a homemaker, but his career has allowed him to invest in real estate. Last summer, he purchased the castle for $3.25 million, according to the Southern Berkshire Registry of Deeds. It’s not his only estate — the artist has renovated seven, and he still owns six, including three antebellum homes in Louisiana — but it is his first castle.

Searles Castle, also known as Kellogg Terrace, sits behind a stone wall along Main Street here, on 64 acres that stretch down to the Housatonic River. The blue dolomite structure has turrets, terraces, and towering chimneys for three dozen fireplaces. Reports vary, but according to Slonem, the estate is 68,000 square feet and has 48 rooms. Since he bought it, he has been involved in a grand renovation, repairing and restoring and bringing in his own eclectic and pop-oriented art and antiques collections. Slonem’s aesthetic is radiant, sumptuous, and playful.

When we met in June, Slonem, 71, appeared inside the front door wearing a brilliant blue suit jacket and a rainbow-striped shirt, to give me a grand tour. We later spoke by phone, when I reached him at his Brooklyn studio.

“Only Stanford White could have come up with this design at that time,’’ he said. “The proportions of the rooms, the first-rate mantels, the hardware. To be able to own something like that is such a rare thing. There are so few left.’’

Slonem, a Neo-Expressionist, is best known for paintings of bunnies, birds, and butterflies. His works exult in the materiality of paint; he’s been known to mix in diamond dust to add to the sheen, and he frequently carves into the paint while it’s still wet to make a grid, a practice inspired by the 40-square-foot cage of an aviary he kept in a former studio.

“Painting is connected to spiritual practice for me,’’ he said. “It’s my ritual, my glue, and the fabric of what keeps me going. I relate the repetitiveness to saying mantras, and the feeling that the divine is achieved through repetition.’’

His audacious home renovations have influenced his art. Homes in Louisiana inspired a bayou-themed series of paintings, and Slonem has taken to crafting art installations with furniture and adornments, like the decor of his mansions. Some are now on view in his museum shows in Europe, such as “Hunt Slonem. Magical World’’ at Latvia’s Art Museum RIGA BOURSE.

His friend, antiques dealer David Petrovsky, has known Slonem since he bought his first estate, in Kingston, N.Y., in 2001. “That was the smallest, a Victorian,’’ Petrovsky said. “He went full bore into buying and furnishing it. He outgrew it pretty quickly.’’

Petrovsky found Searles Castle for Slonem. The previous owner, the family of the late Thomas Bratter, founder of John Dewey Academy, a preparatory school housed there, was looking to sell. (The school’s troubled history has been chronicled in the Berkshire Eagle; an outside investigation revealed former students accused Bratter of fostering a culture of abuse.)

Historic mansions that hew to their original interiors can seem sepulchral. Slonem has made Searles Castle feel alive and lush by mixing past and present. He honors the past, and how it lingers. He said a medium who channels the dead puts him in touch with spirits. “I have a lot of contact with former builders and a relationship with the people who have lived in some of these houses,’’ he said.

Slonem said he and his medium have made psychic contact with the earliest owners, heiress Mary Frances Sherwood Hopkins and her second husband, interior decorator Edward Searles, who were said to hold seances themselves. Hopkins, whose first husband, Central Pacific Railroad magnate Mark Hopkins, had died, was said to be America’s richest widow. She had the castle built on family land where her aunts, the Kelloggs, had run a girls school. Hopkins hired Searles to decorate, and married him in 1887, after the castle was complete. He was more than 20 years her junior. When she died at 73 in 1891, she left her considerable wealth to Searles — much to the dismay of her adopted son, who challenged the will.

“I felt the presence of a grand woman when I first went in there,’’ Slonem said, but “the spirits aren’t breathing down my neck.’’

Just inside the castle’s entryway, across from the grand staircase, is a small chamber Slonem calls “the gothic room.’’ He installed an ornate 19th-century gothic chandelier, which dominates the space.

“Each room just screamed a function to me,’’ he said. “Chinese room, library, gothic room, the French room with all the white and gold and a painted ceiling.’’

The music room is a showpiece with vaulted ceilings and a second-floor hallway overlooking it, and furniture upholstered with prints designed by the painter.

Originally, the music room had what was believed to be the biggest organ in a private residence in the country. “I could get another’’ Slonem said, “but they’re expensive to install.’’ He does have a harp.

“These homes are like giant playgrounds for me, an empty palette with bigger-than-life structures involved. I collect not knowing where things are going to go. I follow an intuitive sense of space and color,’’ he said. “They’re like artworks of mine — a grand, unfolding work.’’

Petrovsky sees what he calls “a spiritual aspect’’ to the painter’s decorating.

“The things he buys, and the houses he buys, are sort of orphaned in his mind, and he saves them,’’ he said.

At the same time, it seems Slonem is reconnecting the houses with the people who made them.

“In one of the readings, [the message] came across that the spirits of the house are enjoying what I’m doing even more than I do,’’ he said.

And he has only just begun. Upstairs is still a work in progress.

“The upper floors are all done in leopard-skin fabric,’’ he said. “It’s the only thing I could get in great quantity.’’

There is no end to details to take care of. The crumbling floor of the second-floor porch is a big project, and there are small ones. “Drawers need to be replaced and remodeled for the built-ins,’’ Slonem said. “The upholsterer was bothered that newel posts on the back stairways had been bashed up by former residents. He recurved all of the round newel posts.’’

Putting his collections in order in the castle may take years, and that’s fine, Slonem said. ’’I’m a sucker for renovating large spaces. Nothing satisfies me more, other than painting, and it’s more relaxing than making my work.’’

Of Searles Castle, he said, “it’s a force to be reckoned with.’’

Cate McQuaid can be reached at catemcquaid@gmail.com.