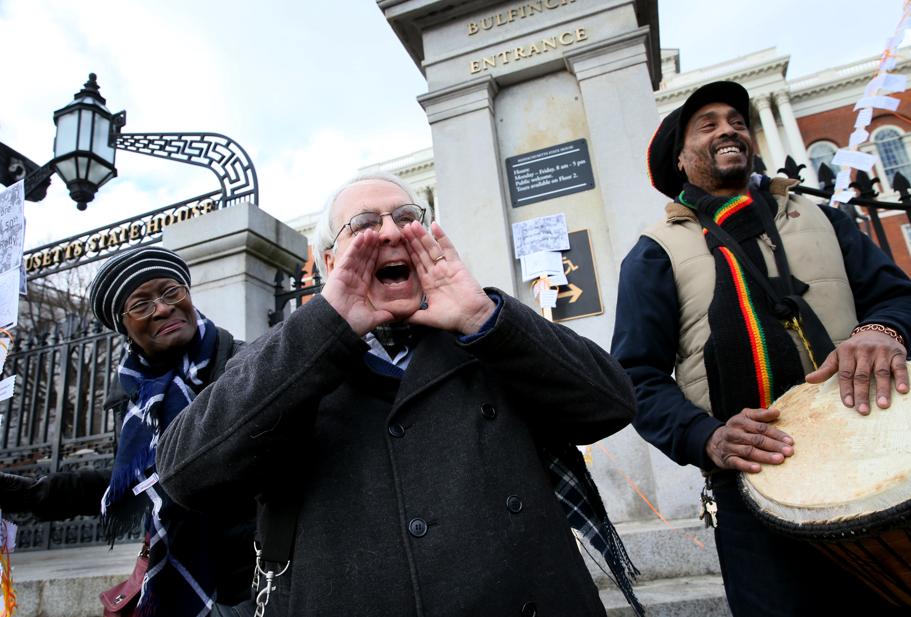 Community activist Lew Finfer addressed a crowd of more than 100 who gathered on Friday at the State House to commemorate the protest 50 years ago that halted the Inner Belt highway project. Below, Governor Francis W. Sargent spoke to Inner Belt protesters in January 1969. 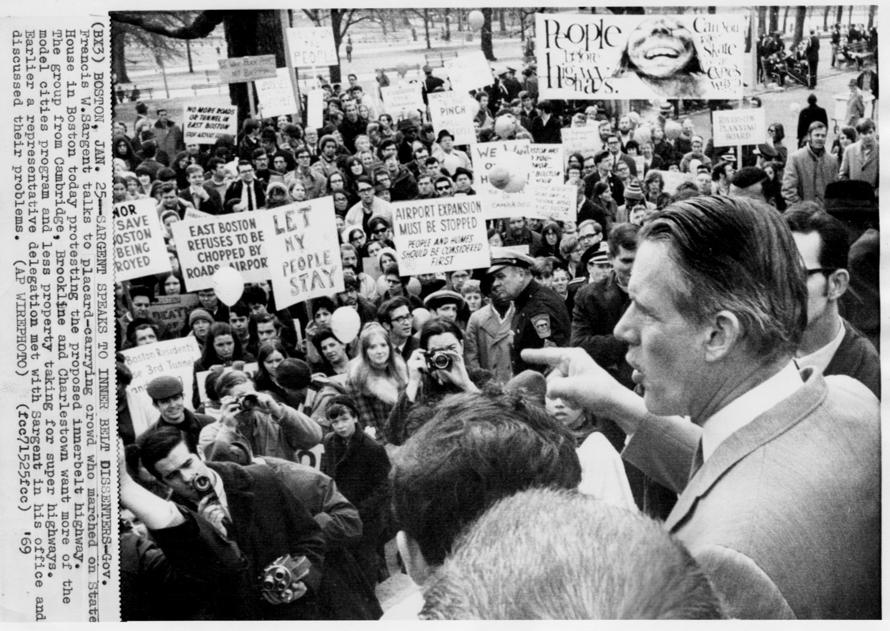 Fifty years ago, 2,000 people stood on the stairs of the State House, protesting a highway project underway that, if finished, would have sliced much of Greater Boston in half. It was never completed, thanks in part to their efforts.

On Friday afternoon, more than 100 people gathered in the same place to commemorate that protest.

“We want to stand and embody that victory and that moment,’’ said Karilyn Crockett, an MIT professor who helped organize the event. “We didn’t want the 50th year anniversary to pass us by.’’

The Inner Belt, proposed as part of a larger highway project in 1948, would have circled through Boston and adjacent areas, starting at an interchange between Massachusetts Avenue and Southampton Street, passing through communities including Roxbury, Cambridge, and Somerville, eventually connecting to I-93. The Inner Belt section of the highway was expected to cost $44 million, according to an online timeline curated by the Cambridge Historical Society.

But the project was unpopular in those communities. Swathes of Roxbury were cleared out to make space for the highway, displacing residents, and protesters started carrying signs that read “STOP THE BELT’’ and splashed the phrase across surfaces throughout Boston, according to clips and photographs from the Globe’s archives.

“All the buildings were gone; all the jobs were gone,’’ said John Bassett, who helped direct the community movement opposed to the Inner Belt in the 1960s and ’70s. “It was highways before people.’’

So organizers started to do something about it. On Jan. 25, 1969 — just days after Governor Francis W. Sargent’s inauguration — the 2,000 people gathered on the State House stairs to protest the highway. The governor’s son, Francis W. “Bill’’ Sargent Jr., joined them.

In December 1970, Sargent declared a moratorium on the highway project, according to a 1987 Globe article. By 1972, the plan for the Inner Belt system had been shut down entirely. The federal funding originally intended for it was instead directed to expansions of public transit through a new provision of the 1974 federal highway bill.

“We will not build the expressways,’’ Sargent said in a 1972 televised speech. “In the end. . . we will have created a real and workable alternative to the increasingly damaging use of the automobile.’’

The governor’s decision represented a major upheaval in transportation policy, allowing states to transfer money set aside for highways into programs meant to expand public transportation.

“It was a huge shift,’’ said Frederick Salvucci in a phone interview after the event.

Salvucci served as transportation advisor for Boston’s former mayor, Kevin White, and later as the secretary of transportation for former governor Michael Dukakis. Before joining the White administration, he was an activist in Cambridge opposed to the Inner Belt project, which Sargent initially supported.

Even though the Inner Belt highway was never built, it still left its mark on the city.

’’Those people are ghosts,’’ Bassett said. “They’re casualties of a state and city government that took too long to protect people.’’

Max Reyes can be reached at max.reyes@globe.com.