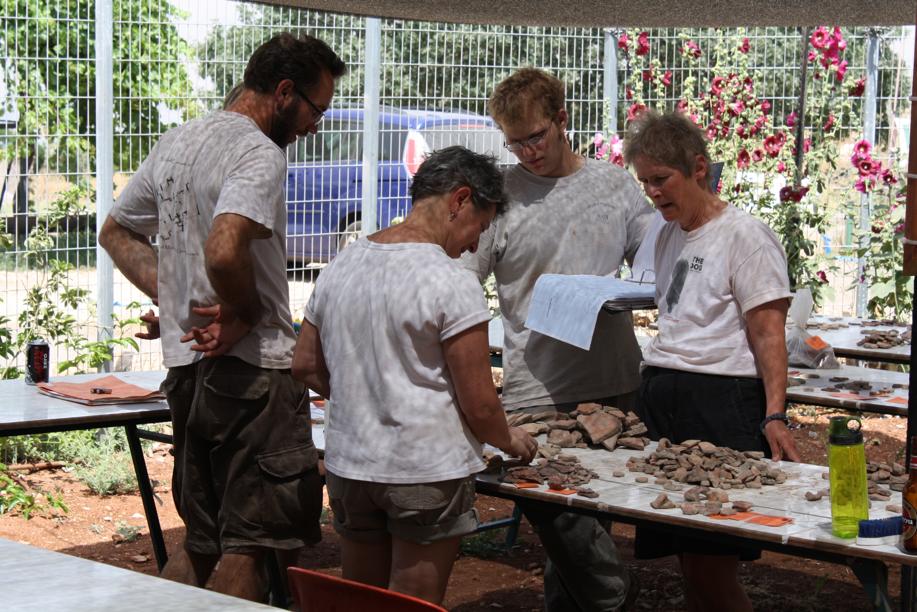 Andrea Berlin, Boston University archeologist and cofounder of the Maccabees Project, with colleague Sharon Herbert, a professor at the University of Michigan, and a graduate student reading excavation pottery on-site at Tel Kedesh in Israel. (Elie Wiesel Center for Jewish Studies)
By Cristela Guerra
Globe Staff

Passover season may seem like an unlikely time to ponder the origins of Hanukkah.

But not for a Boston-based team of international scholars participating in a multi-disciplinary research effort called The Maccabees Project.

Inspired by new archaeological findings and ancient Jewish texts, the focus of the project is on the legacy of the Maccabees, the clan of ancient Israelites who waged war against foreign forces and built the Hasmonean dynasty. The Maccabees stand as a complex, ongoing symbol of national identity — so much so that even presidential candidate Ted Cruz evoked them at the end of last year, encouraging Jews to stand against anti-Semitism, defend religious freedom, and be “modern-day Maccabees.’’

New scholarship about these key historical figures in the holiday narrative is testing “fundamental claims in the tradition,’’ according to Yonder Moynihan Gillihan an associate professor of Second Temple Judaism at Boston College.

The goal of this collaboration is to better understand the Maccabees’ impact on Jewish identity. What if they weren’t as triumphant as the Old Testament accounts suggest? What if some of their war stories were made up or borrowed in order to bolster a geopolitical agenda? And were they truly great ancient warriors or has their heroism been exaggerated?

The Maccabees Project, sponsored by the Elie Wiesel Center for Jewish Studies and supported by the Jewish Cultural Endowment and the Institute for the Liberal Arts at Boston College, is hosting three talks in Boston this month, which begin tomorrow.

Hanukkah, an eight-day commemoration of a miracle during a siege of Jerusalem, celebrates the reconsecration of the Jerusalem Temple after its desecration by the Greek king Antiochus IV, in 167 BCE. His profane acts galvanized the Jewish people in the region to rise up against Greek rule. Ancient literary sources claim that the Maccabees, a band of five brothers under the leadership of Judah “the Hammer,’’ guided “the small, untrained Jewish fighters’’ to victory over Greek imperial armies, Gillihan said.

But in recent years, tangible contradictions have emerged as potentially incriminating evidence from the depths of Tel Kedesh, an ancient 20,000-square-foot Maccabean-era administrative outpost in northern Israel, near the border of Lebanon. These findings may further the theory that the books of First and Second Maccabees, part of the Old Testament in the Catholic bible, were written to serve as propaganda rather than accurate historical accounts. Boston University archeologist Andrea Berlin, cofounder and co-director with Gillihan of the Maccabees Project , co-directed the site’s 15-year excavation process.

No historical sources mention the existence of this vast structure, yet in an account from 1 Maccabees, Kedesh was significant. It was near the place that Jonathan Maccabee overtook the forces of King Demetrius II before slaughtering thousands of Greek soldiers.

“I’m an archaeologist, not a text scholar, so when I first came across this reference to Jonathan [during excavation] the timing worked out perfectly,’’ Berlin said of records found at the site.

“The more I studied, the more uncomfortable I got.’’

Among her most intriguing findings was the skeleton of an infant in the archive room. It was missing its skull, hands, and feet. The discovery begged the question: Had this small child been killed as a sacrifice and if so, by whom? The Phoenicians, another local group, were known to practice child sacrifice. The ancient Israelites were not.

So was it even Jonathan’s battle? Scholars aren’t sure.

“Jonathan is not much of a warrior, and it also doesn’t appear the Seleucid King [Demetrius II] from the time was much of a troublemaker for people in Judea,’’ Berlin said. “I think within the guise of the story, they needed to come up with a battle for Jonathan to be engaged.’’

The Maccabees were among the few rulers of that time who recorded their history. In this way, they could promote a specific image of military might for generations to come. The Hasmoneans likened themselves to King David or “moguls, like Jay Z,’’ Gillihan joked.

[“First Maccabees] presents them as warriors, pietists, and poets in the pattern of other scriptural super-heroes,’’ he said.

Kings earned their legitimacy via victory in battle, said Katell Berthelot of the National Center for Scientific Research, in Aix-en-Provence, France.

“The goal of the Hasmoneans,’’ Berthelot said, “was to take power, stay in power, legitimize their power, have more power.’’

Perhaps the project will change opinions about the Maccabees. Perhaps it will not.

To academics, what matters is that the discussions surrounding these cultural icons continue to evolve, even thousands of years after the Maccabees lived.

“It’s important when we scholarly sorts are working stuff out to do some of it in public,’’ Berlin said. “It’s how we push the ball further down the road, confronting evidence that doesn’t make sense.’’

On April 13, a public luncheon talk called “Pietists, Pragmatists, Infidels, Martyrs: The Maccabees in Scripture and Tradition’’ will be held at noon at Boston College School of Theology & Ministry Library, 117 Lake St., Brighton.

A public dialogue, “Can Judaism Survive a Jewish State? On the First and Second Books of Maccabees,’’ will be held at 7:30 p.m. at Congregation Kehillath Israel, 384 Harvard St., Brookline.

On April 14, there will be a research colloqium, “The Invention of Jewish Identity in First and Second Maccabees,’’ at 3 p.m. at Boston College School of Theology & Ministry Library. Information: sites.bu.edu/maccabees

PREVIOUS ARTICLE
Article 133 of 139
NEXT ARTICLE