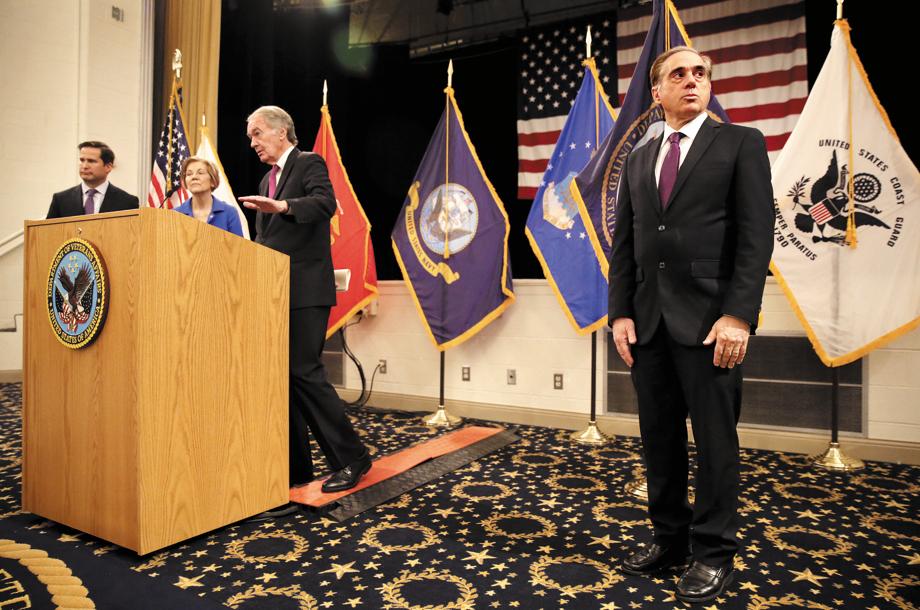 BEDFORD — The nurse’s aide who was allegedly playing games on her computer at the Bedford VA Medical Center when a Vietnam veteran went into cardiac arrest retired from the agency as officials were moving to fire her, Veterans Affairs Secretary David Shulkin said Saturday.

The retirement of the aide, Patricia Waible, was effective Oct. 20, he said.

Shulkin disclosed Waible’s retirement after touring the Bedford VA with US Senators Elizabeth Warren and Edward Markey and several US House members from Massachusetts.

He also revealed that the VA is working to demote the facility’s former director, Christine Croteau, who had been the subject of complaints about her leadership style and accused of creating a hostile work environment.

Shulkin’s visit to the Bedford VA came after Globe Spotlight Team reports on deplorable conditions at the hospital, including one about William Nutter, 68, who died at the facility in July 2016.

Although Nutter had a heart condition that required hourly monitoring, Waible never checked on him, the Globe reported. A nurse coming to work on the day shift found him unresponsive in his bed.

“Bill Nutter was not a serial number on a file. He was a Vietnam veteran and Army reservist who spent decades serving this country, and he deserved the very best care the VA offers,’’ Warren said. “His tragic death is part of a string of ongoing problems that must be addressed. Conditions at Bedford need to improve, and they need to improve immediately.’’

Warren and Markey have requested the VA’s Office of Inspector General to expedite its criminal investigation into Nutter’s death. Shulkin declined to comment on the probe, but said what happened to Nutter appears to be an isolated incident.

Attempts to reach Waible were unsuccessful Saturday, as a phone listed in her name had been disconnected.

US Representative Seth Moulton, a Marine veteran, said he uses the Bedford VA for his health care.

“As we’ve heard from the experience of the Nutter family, we need to get better. The VA is not perfect,’’ Moulton said. “We’re letting some of our veterans and their families down. And our veterans deserve the best health care in the world.’’

Also touring the VA hospital were US Representatives Niki Tsongas and Katherine Clark.

In recent months, the Bedford VA has faced a growing number of questions about its quality of care.

A team from the VA’s newly created Office of Accountability and Whistleblower Protection recently met with employees there. Shulkin said he also went to Harvard Law School to meet with Bedford staff members about their concerns.

One whistleblower told the Globe that he was asked to leave the Bedford VA after showing up Saturday in hopes of speaking with Shulkin.

Robert DiGregorio, an electrician who complained about asbestos on the suburban campus, said the facility’s chief of engineering asked him to leave, saying that Secret Service agents had identified him as a possible threat.

“I did nothing wrong,’’ DiGregorio said. “I thought it was an open-door policy. That’s how we understood it [Friday] when we heard [Shulkin] was coming.’’

Shulkin said he wasn’t aware of employees being prohibited from attending the event.

The disciplinary action being taken against Croteau, the former director, is not related to the Nutter case, a VA spokeswoman said.

Under the proposal, Croteau would lose her senior executive service status, but could work for the VA in less prominent roles, Shulkin said.

Croteau led the Bedford VA as its acting director and later director from 2011 to 2016, an official said. She is now assigned to the agency’s headquarters in Washington, D.C.

“She will not be returning to this medical center,’’ Shulkin said.

A working telephone number for Croteau could not be located Saturday.

PREVIOUS ARTICLE
Article 20 of 221
NEXT ARTICLE