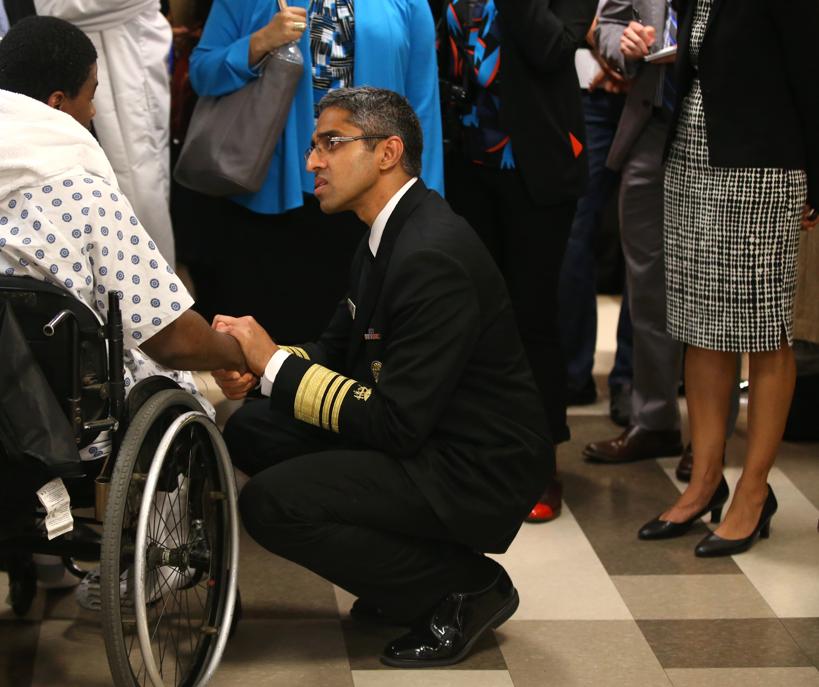 US Surgeon General Vivek Murthy visited what some locals call “the worst intersection in Boston’’ on Friday as part of his effort to talk to prescribers nationwide about how they can address the country’s rising opioid crisis.

The Boston stop on Murthy’s “Turn the Tide Rx’’ tour brought him to the Boston Health Care for the Homeless Program on Albany Street, at the heart of “Methadone Mile,’’ so nicknamed for the cluster of homeless shelters and drug addiction programs there that draw people battling substance abuse from across the city. Accompanied by the program’s top officials and state Health Commissioner Monica Bharel, Murthy toured the facility and met with patients who shared their stories of stigmatization and recovery.

Murthy is visiting the states hardest hit by the prescription opioid epidemic. In Massachusetts, the number of opioid-related deaths has nearly tripled in the last decade. After the tour, Murthy participated in a panel discussion at Harvard Medical School, where he told roughly 200 people including prescribers in the audience how they could contribute to his campaign against opioid abuse.

During his visit to Albany Street, Murthy described how the federal government can partner with state and local organizations to raise awareness of addiction as a medical issue, just like diabetes or heart disease.

Indeed, the first stop on Murthy’s tour was the program’s Supportive Place for Observation and Treatment clinic, which in the seven weeks since its opening has drawn critics who say its model of providing a private, medically monitored room for people to ride out their high enables drug abuse and reinforces the area’s unsavory reputation.

Murthy also visited the program’s outpatient and inpatient facilities. Between stops, he shook hands with patients and posed for photographs. One patient admired Murthy’s US Public Health Service uniform, which Murthy joked that he wears all the time, even to sleep.

The opioid crisis has hit Boston’s homeless population especially hard: A study by the Boston Health Care for the Homeless Program in 2013 found that drug overdose had replaced HIV as the primary killer of the city’s homeless.

As a result, the program has been forced to reevaluate its model of care, folding substance abuse treatment into its more established focus on illnesses like cancer and diabetes, said program president James O’Connell.

Murthy said the program’s model of integrated care — treating mental health, substance abuse, and primary care issues all together — is an example of how Massachusetts has led the way in fighting the opioid crisis.

“That’s what we need more of across the country,’’ he said.

Clinicians weren’t the only ones emphasizing the need to address mental health alongside substance abuse. Julio Velazco, 40, a patient at the clinic who has been clean for a year and a half, said that when he met with Murthy, he emphasized that detox facilities should always be accompanied by psychiatric units.

But Velazco, who started abusing alcohol and heroin after his 3-month-old daughter and her mother died in a car accident, said he hopes the surgeon general’s primary takeaway from his visit to Boston is empathy for a population too often stereotyped.

PREVIOUS ARTICLE
Article 9 of 95
NEXT ARTICLE