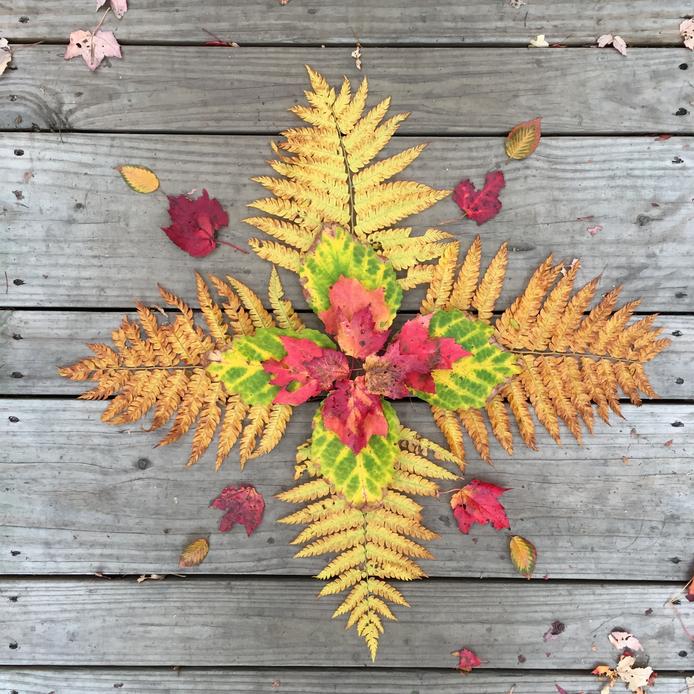 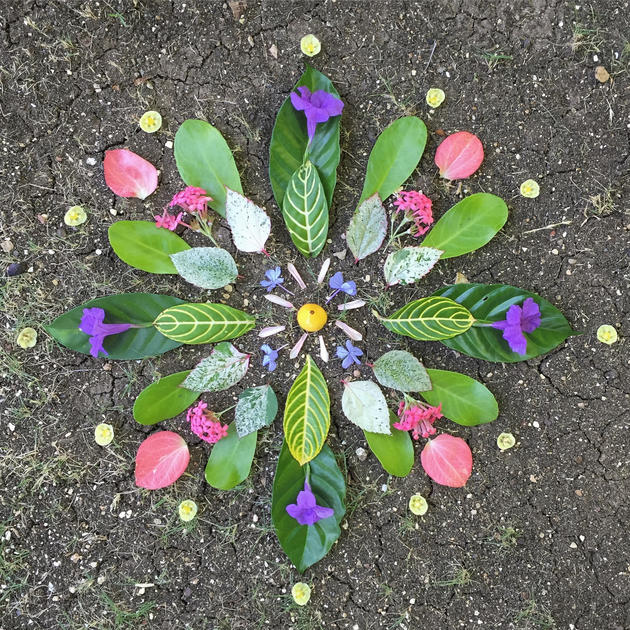 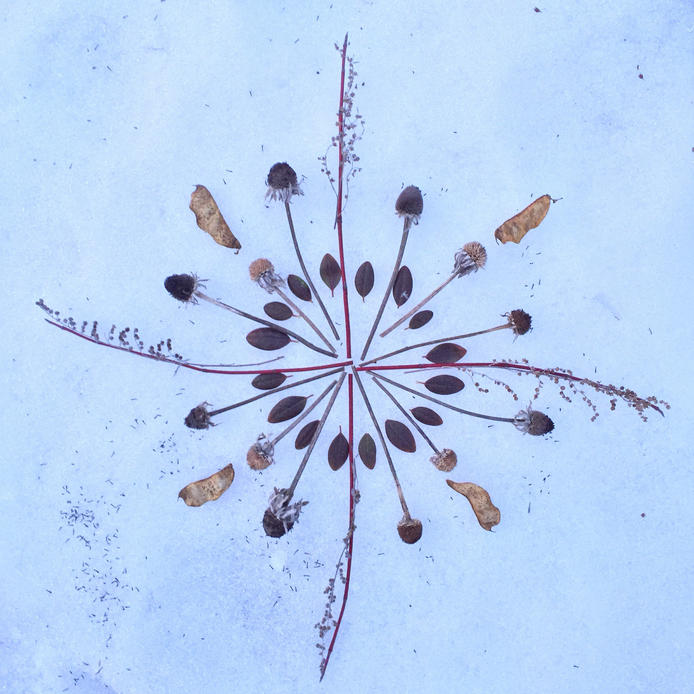 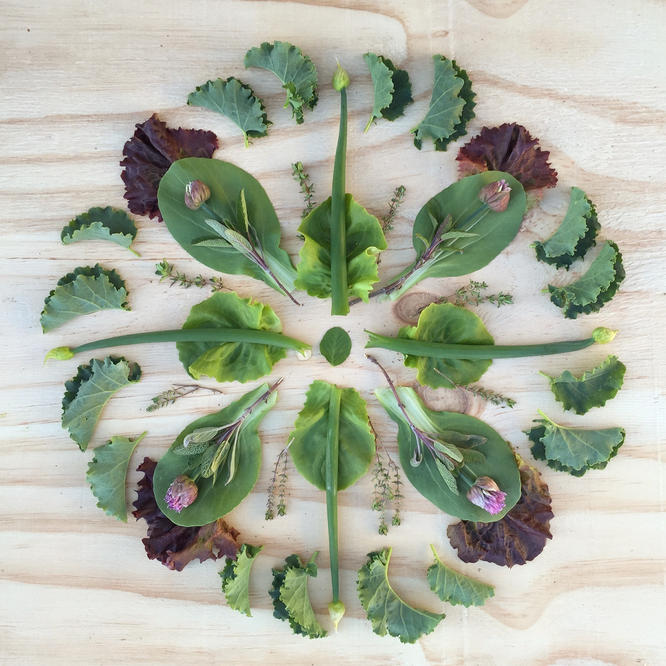 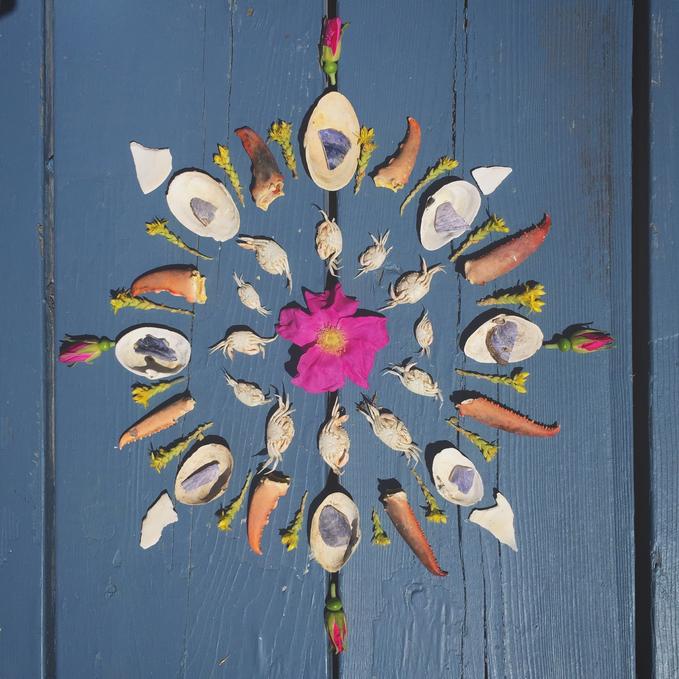 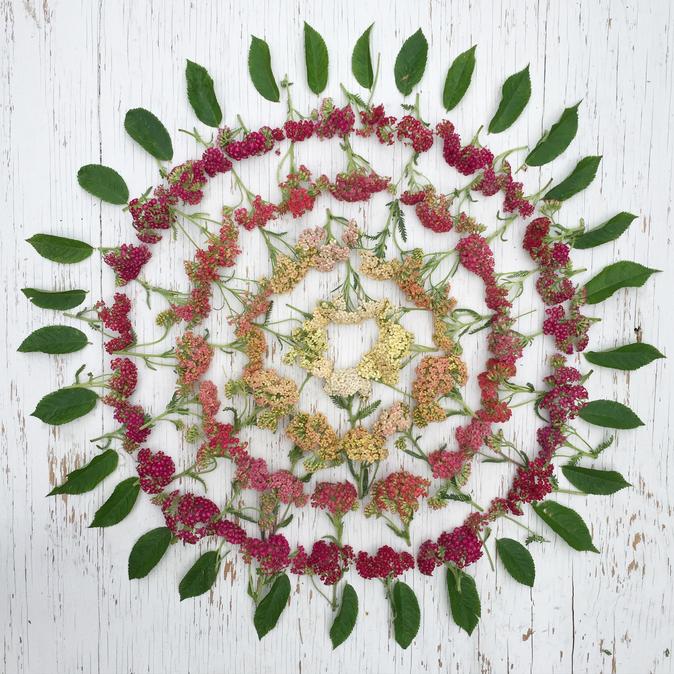 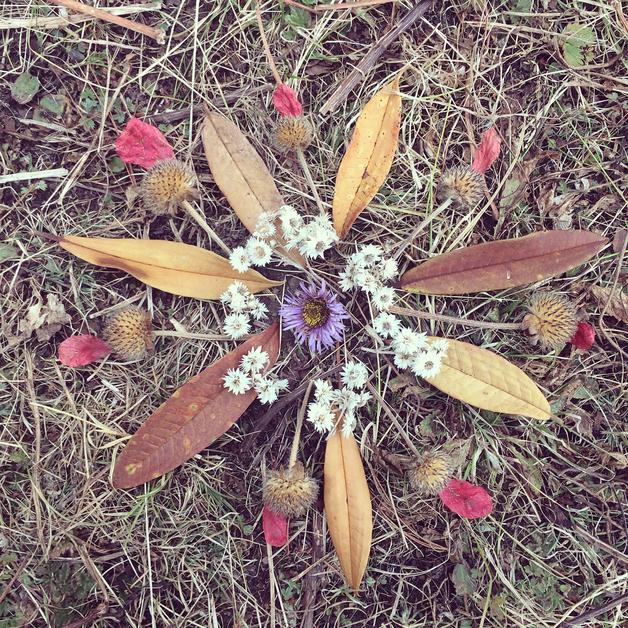 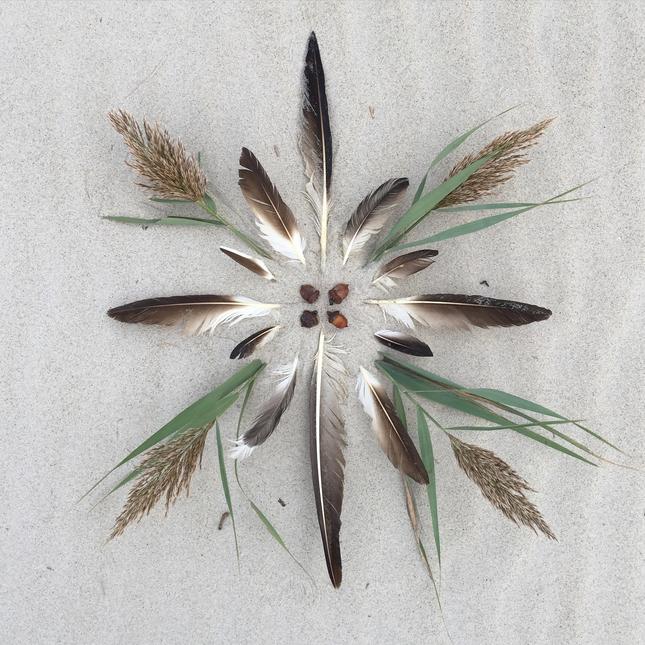 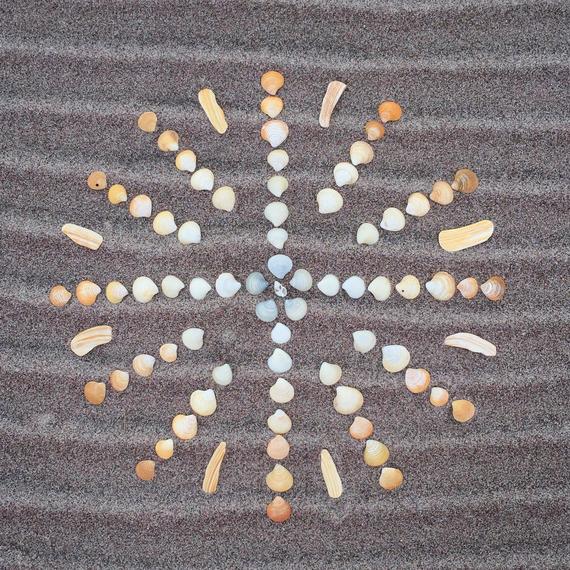 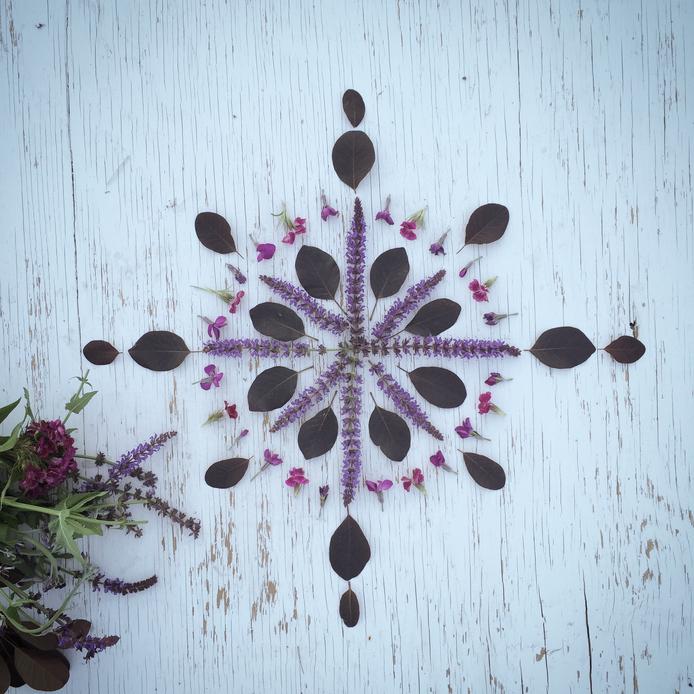 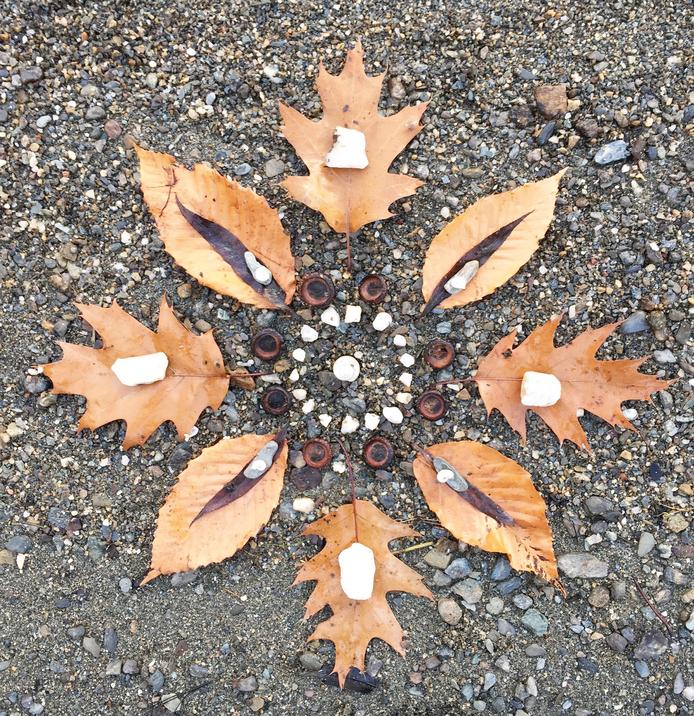 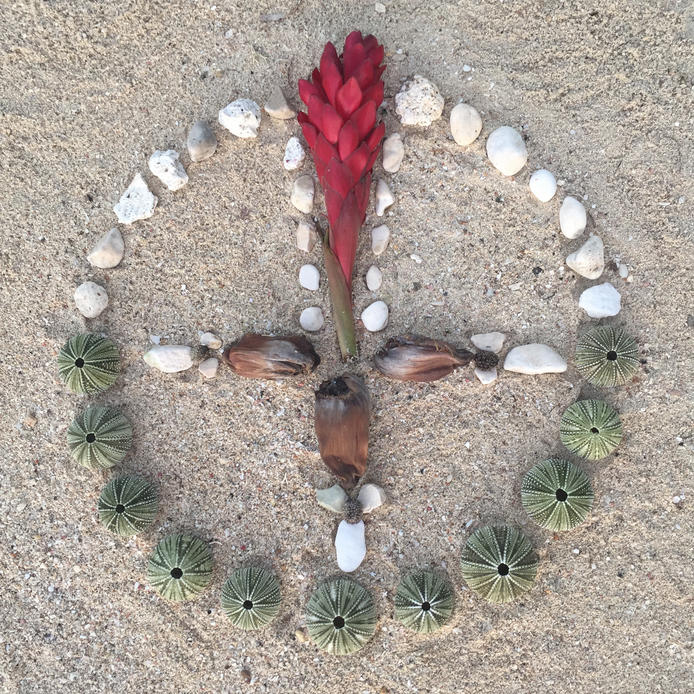 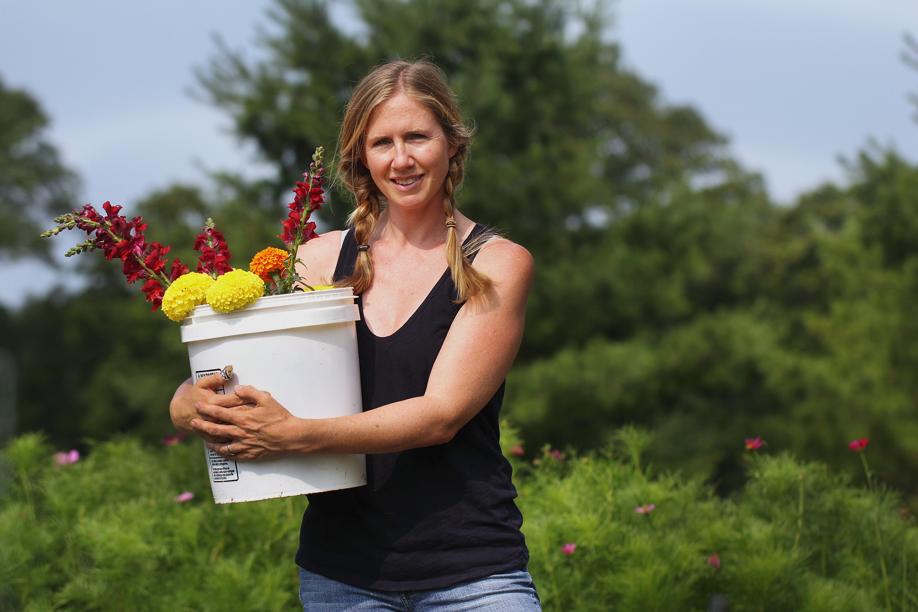 It was November; the foliage was crunchy and brown, the flowers dry and fading. As she wound her way through the mountains, she had an urge to gather up little bits of nature, “some because I’d never seen them before, some which were the same things we have here.’’

At night, she’d play with her foraged materials on the ground outside her tent, arranging them in free-form colorful designs that she recognized as mandalas — ancient geometric-shaped figures which carry symbolic weight in Buddhism and have been embraced in the Western world. Mandala means “circle’’ in Sanskrit, but “it represents the universe,’’ said Glorieux.

Not that she had grand, cosmic aspirations for her own designs. “I enjoy gathering things when I trek,’’ she said. “The first one I made was not intentionally a mandala. But I think at the back of my head, I was thinking I’m in a Buddhist culture, and mandalas are a Buddhist thing.’’

She posted it on Instagram, and then another, and another, and before long “The Ritual Mandala’’ was born — a digital catalog of more than 115 (so far) of her textured, richly colored mandalas created from natural materials. These include leaves, sticks, sand, pine cones, feathers, eggplants, radishes, hard-boiled eggs, stone, seashells — and lots of flowers. (It doesn’t hurt to own a flower farm if you’re involved with mandalas.)

Which she is, deeply. Her mandalas have been widely noticed on Instagram and she’s developed a following in, of all things, the business world.

Glorieux, a Falmouth native, has long been entrepreneurial herself. She started a sustainable flower farm, called Aster B. Flowers, in 2011, even though she’d never grown anything before. She turned out not only to be a successful flower grower but provides bouquets to specialty shops in the Cape Ann area and does floral arrangements for weddings.

Now she has a regular mandala gig with Whole Foods in Lynnfield, which has a half-acre rooftop garden: Twice a month she uses seasonal produce from their garden to compose a mandala, which is then photographed and posted on the store’s Instagram page. “When I see the [food], it organically appears to me what I want to do,’’ said Glorieux, who has composed 10 Whole Foods mandalas, including an uncharacteristically premeditated one for the Fourth of July. (It had a flag motif, using yellow, purple, and orange carrots for the stripes, and sliced jalapeños for the stars.)

“They’re really visually stunning,’’ said Katie Lamie, marketing field associate for the store, who is working on a video slideshow of all the Whole Foods mandalas from the 2016 growing season; she plans to screen it at the store.

Glorieux’s mandalas are also appreciated by Ksenia Avdulova, a New York digital marketing consultant and healthy-breakfast advocate whose website is called Breakfast Criminals. Inspired by Glorieux, she’s started making breakfasts “that embrace the concept of sacred geometry,’’ and posting them on her own Instagram page. (They include bowls of cereal with fruit and nuts in a mandala configuration.)

“I can see this as something she can build a brand around and reach many people,’’ said Avdulova.

“They have a meditational quality to them,’’ said Amy Swift Crosby of Manchester, a regular customer of Aster B. Flowers. Inspired by Glorieux’s work, she started advising some of her clients to digitally showcase their products using mandala forms. “It’s a very arresting way to show off their products — a beautiful application,’’ said Crosby, a brand strategist who lives in Manchester-by-the-Sea, and founder of SMARTY, a women’s entrepreneurial network.

As a mother, Crosby has also found that the process of making mandalas has a creative appeal that resonates even with kids. “We went camping and started making them on the beach with sticks and stones, and pretty soon other kids started joining us,’’ she said. “They thought it was such a cool thing.’’

Ephemeral though they are, mandalas have become a big piece of Glorieux’s life. “They’re always on my mind,’’ she said. “I think about it every day. I’ll see a leaf and think, ‘Oh my God, I want to make a mandala with it.’’’

It’s not always possible, of course. Since she chooses to make them outside, mandalas are very weather-dependent, though “once in a while, if the elements aren’t cooperating with me, I’ll come inside.

“I want to make a lot more than I actually get to make, with a small business and two kids,’’ she says, “but I feel like it has helped me fit creativity into my life more regularly. In the moment, it does slow me down.’’

PREVIOUS ARTICLE
Article 116 of 127
NEXT ARTICLE