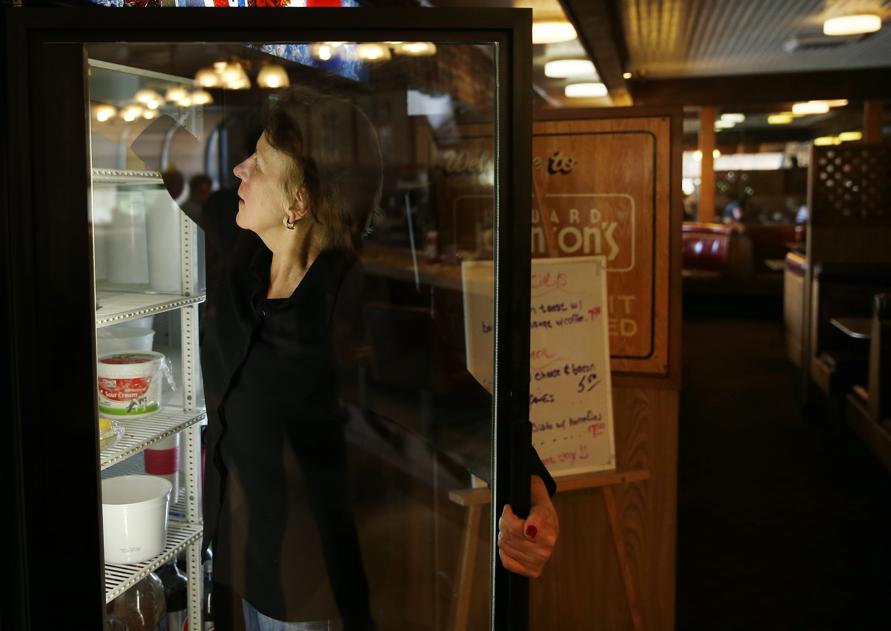 A Howard Johnson’s in Canton (left) advertised the famous 28 flavors of ice cream in 1949. The Maine restaurant now serves only one.When it opened in 1966, the Howard Johnson’s in Bangor had little competition. Today, there are plenty of options nearby. (Sammarco Collection, Archives and Special Collections, Joseph P. Healey Library, University of Massachusetts–BostonJessica Rinaldi/Globe StaffJessica Rinaldi/Globe Staff)
By Brian MacQuarrie
Globe Staff

Long ago, the job became a marathon for the 68-year-old dynamo. But lately it’s become a sprint in this Maine city.

The last Howard Johnson’s restaurant in New England is scheduled to close Tuesday — leaving only one more in the country — and an uptick in customers is arriving for one final serving of pancakes and nostalgia.

“If these people had come before, we’d still be in business,’’ Jewett said this week with a head shake and a smile.

News of the closing has spread, bringing regulars and tourists to a restaurant whose cozy booths and counter stools conjure memories of family trips and roadside comfort food here and elsewhere.

“For me, it’s just sentimental,’’ said Melissa Ziobron, a Connecticut state representative who recalled long-ago trips with her grandparents. Now, it was Ziobron’s turn to bring her son, Bryan, who had been visiting the nearby University of Maine on a college tour.

Ziobron looked around and smiled as Bryan popped a quarter into the bubblegum machine. “I’m getting teared up,’’ she said.

Once a busy outpost of the iconic chain, the Howard Johnson’s in Bangor has become a fraying relic from the predigital era of vinyl records and Sunday drives. The “breakfast all day’’ sign is misleading: The doors close at 2 p.m. Some of the freezers don’t work. And Jewett covers the restaurant’s 150 seats by herself on Mondays and Tuesdays.

“Nobody wants to work, especially this kind of work,’’ Jewett said.

And then there’s this sacrilege: Forget about finding 28 ice cream flavors, a number once proudly associated with the homey HoJo’s brand. There’s only one in Bangor — vanilla — and it’s etched on a lonely sign above the counter where 27 others from burgundy cherry to black raspberry had beckoned.

That’s quite a come-down for what once was the largest restaurant chain in the United States. Launched in 1925 by Howard Deering Johnson from a single store on Wollaston Beach in Quincy, his simple merger of quality food and a friendly atmosphere grew into a commercial behemoth.

By its zenith in the late 1970s, Howard Johnson’s had more than 1,000 restaurants and 500 motor lodges whose orange roofs signaled dependability for millions of customers.

Johnson pioneered the franchise model along the way — the first franchise opened in Orleans, Mass. — in which he sold the Howard Johnson name for a fee and insisted that the owners buy their food and supplies from him.

The chain also operated the first turnpike restaurant in the country — in Pennsylvania in 1940 — and eventually had the largest number of restaurants on toll roads from coast to coast.

Johnson correctly saw how the country’s growing mobility could help his highway-conscious business, but the company could not stave off the mushrooming growth of fast-food outlets from the 1960s onward.

Other competition came from hotels that began offering continental breakfasts, and salespeople who did their business on phones and computers rather than the road. After Tuesday, the only HoJo’s restaurant left standing will be in Lake George, N.Y.

“The best times were when we first opened,’’ Jewett recalled. That was 1966, a time when the restaurant “was the only thing on the block, so we had it made,’’ she said. Now, there are several hotels and fast-food options nearby.

David and Sally Patel, who own the restaurant and adjacent Howard Johnson Inn, could not be reached for comment. The motel will remain open.

Julie Jewett has worked alongside her mother at the restaurant for 30 years, and she juggles the simultaneous roles of manager, cook, and dishwasher with a simmering intensity. Watching her work is like watching a grease-speckled maestro in full control of an orchestra of eggs, waffles, French fries, and hash browns.

“I can’t talk to you now! I’m too busy!’’ Julie scolded an unexpected visitor to the kitchen.

Julie’s relationship with her mother — her indispensable partner at the restaurant — is strikingly different.

“Mamma,’’ Julie says, signaling that another lunch is ready.

“Thank you, my dear,’’ Kathe answers, reaching for the plate just as she has tens of thousands of times.

The pair created a deep reservoir of good will over the decades. Stephen King, the Maine-based horror novelist, had been a comfortable, frequent customer until the “summer people’’ drove him away by pestering him to sign their books, Kathe Jewett said.

Now, it’s the patrons who are returning the kindness. One of them, Lacey Bailey, brought her 6-year-old son, Ryker, to say goodbye.

“I’m going to miss you,’’ Kathe said to Ryker, bending for a quick hug amid the busy transition from breakfast to lunch. “Are you all ready for school?’’

Bailey also will miss a few things, specifically the eggs Benedict, Kathe, and Julie. “This is it,’’ she said with a sigh.

Kathe Jewett wasn’t shedding any tears — not yet, anyway.

The restaurant will stay open Tuesday “until the food runs out,’’ Jewett said. And then, she’ll head to retirement, where the rigors of waitressing will be a thing of the past.

“I’m getting my face done, new hips, and new knees,’’ Jewett said with a chuckle. “It’s been a good life.’’

Brian MacQuarrie can be reached at brian.macquarrie@ globe.com.

PREVIOUS ARTICLE
Article 8 of 91
NEXT ARTICLE