critical care Critical care
As the state grapples with the opioid crisis, smaller communities have been hit particularly hard. At Cape Cod Hospital, that has led to a change in policy — and attitude — when dealing with drug-dependent newborns.
PREVIOUS IMAGE 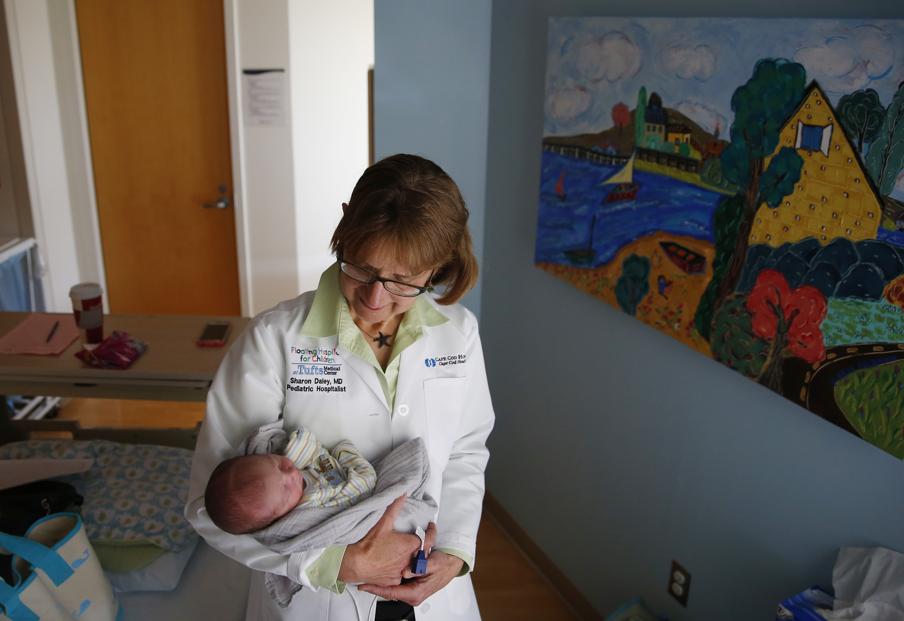 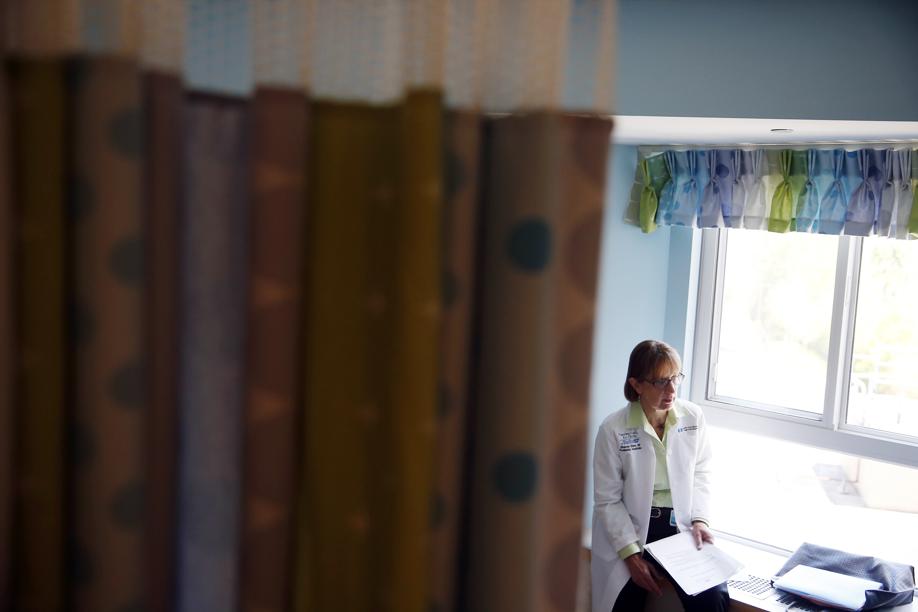 “They’re a lot of work,’’ Dr. Sharon F. Daley said of drug-dependent infants, “but we can do it here.’’ (Jessica Rinaldi/Globe Staff)
By Felice J. Freyer
Globe Staff

HYANNIS — Dr. Sharon F. Daley had never cared for a baby like the one brought to her office — shrieking, trembling, tense — one day in 2007. He’d been healthy at birth, but now, four days later, something had clearly gone wrong. Daley soon learned the infant was withdrawing from opioids his mother had taken while pregnant.

She didn’t know then that this child would be the first of many, and that an illness so startling in 2007 would become routine by 2016, as the opioid-abuse epidemic ripples through families on Cape Cod, across Massachusetts, and around the nation. Today, Cape Cod Hospital, where Daley is chief of pediatrics, has one of the state’s highest rates of babies experiencing withdrawal, and on any given day there is likely to be one such newborn in the hospital.

The scourge of opioid abuse in Massachusetts has brought unforeseen challenges to unexpected places — towns outside Boston are seeing a higher rate of opioid-related deaths, and a higher rate of opioid-exposed babies. The hospitals with the biggest proportions of such babies — 3.8 to 5.8 percent of deliveries in 2014 — are in Fall River, New Bedford, Melrose, Pittsfield, and Hyannis.

At Cape Cod, drug-exposed babies stay in a peaceful pediatric ward, at a fraction of the cost many other hospitals spend treating them in intensive care. The latest evidence shows that such babies recover best in dim, quiet places, with lots of cuddling and breast-feeding, and parents at their side.

At the Cape’s two hospitals — Cape Cod Hospital in Hyannis and Falmouth Hospital — 61 babies were born after being exposed to drugs in the womb, and 35 of them suffered withdrawal symptoms, in the fiscal year that ended Sept. 30. They were a small fraction of the nearly 1,200 babies delivered during that time at the two hospitals, but three times more than in 2009.

In Boston, meanwhile, with the exception of Boston Medical Center, the city’s maternity hospitals deliver relatively small numbers of these babies.

In learning how to take care of drug-exposed babies, Daley said, one of the toughest challenges was changing attitudes about the mothers.

“In the beginning it was common for staff members to say, ‘Why doesn’t the mother just stop taking drugs?’?’’ she said. “Many of these mothers would stop taking drugs if they were able to. Many of our mothers are in treatment programs where they are doing well.’’

By the time Ashley W. delivered her son in 2012, the judgmental attitudes were gone, she said. “They treated me with dignity and respect,’’ said Ashley, who asked that her last name not be used because family members fear the stigma of addiction.

Like many of the women delivering drug-exposed babies, Ashley was already in recovery, taking methadone to control her heroin addiction. Her doctor had advised her that stopping the methadone during pregnancy would harm the fetus.

Because it can take a few days for a baby to show symptoms, as happened with that first infant in 2007, the hospital now keeps all drug-exposed newborns for at least five days. About 40 percent don’t go into withdrawal, and can safely go home.

But Ashley’s son, Cameron, wasn’t one of them. Two or three days after his birth, he started the high-pitched cries that signal opioid withdrawal, along with his tightened muscles and tremors.

“You have this guilt and shame: ‘Oh my goodness, I did this to my child,’ ’’ Ashley said.

Cameron moved to the pediatric ward, and his mother, although no longer a patient, stayed with him in a spacious single room, equipped with a crib for him and a bed for her.

There, Cameron received medication to ease his symptoms, and his heart rate and blood-oxygen levels were monitored. The nurses taught Ashley, a first-time mother, how to swaddle and soothe him, and helped when she had trouble breast-feeding. When a mother is taking prescribed methadone or buprenorphine as part of addiction treatment, breast-feeding’s benefits are thought to outweigh any hazards from the small amount of opioids that get into breast milk.

Drug-exposed babies are usually full-term and healthy except for their temporary withdrawal pains. They get better faster when light and noise are kept low, and their mothers are on hand to nurse frequently and hold them skin to skin. In a study last year, Boston Medical Center researchers found that if parents spent time at the bedside, the babies needed less medication, had milder symptoms, and went home sooner.

But many hospitals treat drug-dependent babies in intensive care units, often clamorous places with little privacy or room for parents to stay. ­Nationwide, intensive care admissions for babies withdrawing from drugs — known as neonatal abstinence syndrome — quadrupled from 2004 through 2013, according to a study published last year.

In Massachusetts, two hospitals place drug-dependent babies in intensive care and 15 in special care nurseries, which are less intensive but still costly medical settings, according to the Health Policy Commission, a state agency responsible for controlling the cost of care.

Cape Cod and Falmouth hospitals don’t have a newborn intensive care unit or a special care nursery. In the last fiscal year, care for a newborn with neonatal abstinence syndrome cost an average of $18,513 at the two hospitals, with an average stay of 18.4 days, according to the hospitals’ parent, Cape Cod Healthcare. That’s seven times more than the cost of a typical newborn, but it might be a comparative bargain: A national estimate of care for drug-dependent babies in 2012 pegged the cost at $66,700 per baby, with 80 percent of it paid by Medicaid.

Dr. Munish Gupta, a newborn specialist at Beth Israel Deaconess Medical Center, said many Massachusetts hospitals “are working really hard to deintensify the care, allowing families to stay with the baby.’’ The Neonatal Quality Improvement Collaborative of Massachusetts, a group of 50 Massachusetts maternity hospitals, has developed standard protocols for care of drug-dependent babies. As a result, Gupta said, breast-feeding rates nearly doubled, while the number of days babies needed medication and the days spent in the hospital have both declined.

In addition to joining the Massachusetts collaborative, Cape Cod Healthcare had its staff participate in online training in care of drug-exposed newborns with a national quality-improvement consortium, the Vermont Oxford Network. The hospital system was also one of two in the state to win a federal grant to offer services to addicted women before and after their hospital stay.

Ashley, now 29, has happy memories of her 28 days caring for Cameron at Cape Cod Hospital. The nurses’ support helped ease her guilt, and their advice proved useful long after she left.

Cameron, now 4, has met or exceeded developmental milestones, she said. Although babies exposed to opioids in the womb may have problems with learning and attention, doctors say those who grow up in stable homes are likely to fare well.

“He’s very well-adjusted,’’ Ashley said of her son. “You would never be able to tell.’’

PREVIOUS ARTICLE
Article 5 of 223
NEXT ARTICLE