Baby boomers destroyed their ears. Biotech is trying to fix them.
Local startups among those working on potential breakthroughs in ways to treat hearing loss
PREVIOUS IMAGE 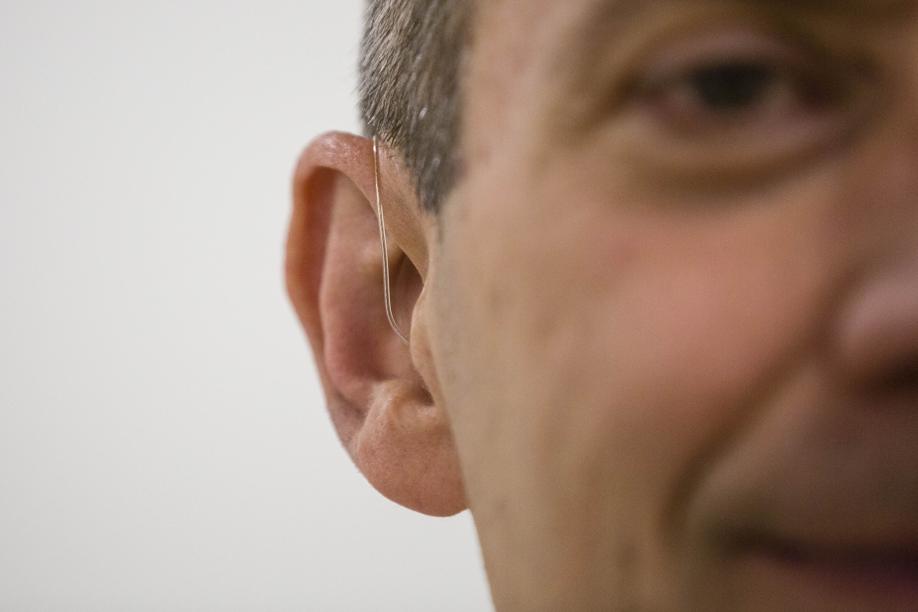 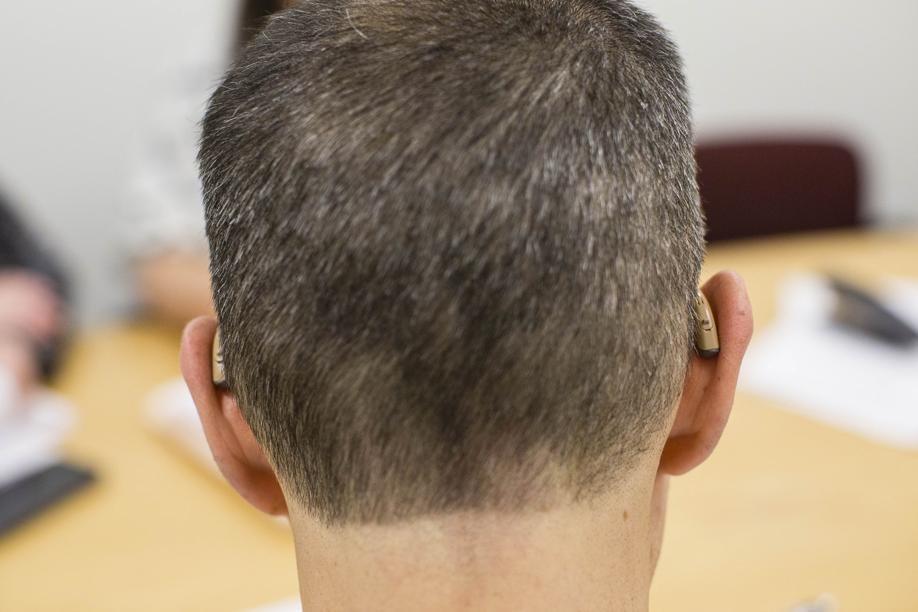 Richard Wichmann, who wears hearing aids, said he is looking forward to developments in the treatments for hearing loss. “They’re working on restoring nerve connections in the ear. I’m hoping to hold out until that’s available,’’ he said.
By Robert Weisman
Globe Staff

Baby boomers grew up with music blasting from dorm room turntables, car stereos, and arenas where the sound of a band at full throttle could rival the roar of a jet engine. Volume became an act of generational defiance. As rocker Ted Nugent put it: “If it’s too loud, you’re too old.’’

Turns out, it was too loud. Millions of boomers are now grappling with hearing loss — some of it caused by turning the volume to 11 — prompting companies to develop treatments that improve upon the expensive and often limited-value hearing aids and surgical implants that have been around for decades.

At least half a dozen biotechs, including two well-funded local startups, are working on potential breakthroughs in the way hearing loss is treated. But it’s unclear if the drugs they’re developing will be ready in time to help hearing-impaired boomers, some of whom are in their 70s.

“It would be wonderful if we could restore the inner ear to its native condition by targeting specific cells with the right treatment,’’ said Dr. Bradley Welling, a neurotologic surgeon at the Massachusetts Eye and Ear Infirmary in Boston. “We’re getting closer, and the tools are improving all the time.’’

Hearing loss is more prevalent than ever, Welling said, because people are living longer. It affects nearly 50 million Americans and about 360 million people worldwide, according to the World Health Organization.

But help may be on the way. Frequency Therapeutics Inc., a two-year-old Woburn company, has raised $32 million from private investors and venture capital firms to back its effort to activate so-called progenitor cells that can repair damage in the spiral cavity of the inner ear by generating new hair cells.

“There’s a fundamental transformation happening in hearing regeneration,’’ said David Lucchino, chief executive of Frequency. “We’re figuring out how to hot-wire the hair cells in the inner ear that die off during a lifetime of being exposed to noise.’’

So far, however, drugs have not supplanted sound-amplifying hearing aids because scientists have been slow to understand the molecular basis of hearing loss, said Steven Holtzman, chief executive of Decibel Therapeutics Inc. in Boston.

Decibel, founded in 2015, has raised almost $57 million from investors led by Third Rock Ventures, one of the nation’s top bankrollers of biotechs. The startup is looking for ways to identify specific genetic targets for patients suffering from a variety of hearing disorders. “We’re at the point now where we can crack open the biology,’’ Holtzman said. “We have the audacity to believe that we’re going to build the soup-to-nuts hearing loss company.’’

Welling, 61, shared the experience of many in his generation. He recalls being a teenager growing up in Utah and listening to Led Zeppelin at a friend’s home. It was loud enough to make “our clothes vibrate,’’ he said. “It sounded like a flying saucer coming down on us.’’

But Jimmy Page and company don’t deserve all the blame for their fans’ deafness. In addition to ear-piercing noise — from concerts, factories, or construction sites — hearing loss often is the result of disease or a congenital defect. In the majority of cases, Welling said, age is a key factor, exacerbating whatever damage was done years earlier.

Modern technology, too, presents hearing dangers at least as formidable as a pair of JBL speakers pushed into overdrive by a Black Sabbath record. Think of people tuned into their favorite songs via a Bluetooth connection while doing yardwork. “Biology never planned for people blowing leaves and listening to music on their ear buds at the same time,’’ said Lucchino.

Many boomers say deteriorating hearing can lead to social isolation. They are often overwhelmed by background noise at restaurants or feel left out of family conversations.

Those who already wear hearing aids face tough choices as it gets more difficult for them to hear. Some opt for electronic devices called cochlear implants that stimulate auditory nerves but sometimes cause loss of patients’ remaining natural hearing. Others are waiting for still-unproven experimental treatments that promise to reverse hearing loss by repairing inner-ear nerve damage.

Researchers are looking into ways to deliver hearing-restoration drugs to patients who already have cochlear implants, or to administer them through implants. But it’s too soon to tell whether either of those techniques will be feasible.

Wichmann, 59, suffers from a common condition known as tinnitus, which causes ringing in his ears. He said he sometimes misunderstands what his colleagues are saying during meetings at Cambridge Health Alliance, where he works as chief revenue officer. “I tend to lag behind in conversation,’’ he said, “because I’m trying to figure out what people are saying. It takes a lot of focus.’’

Retired software company employee Sally Kozlowski, 69, who spent years at work talking on the phone with a headset, misses being able to listen to Christmas music clearly while baking for the holidays at her home in New London, N.H. Last March, she went to Mass. Eye and Ear for a cochlear implant in her left ear, a surgical procedure that took five hours.

While the implant has improved her quality of life in some ways, Kozlowski said, she is still disappointed by the lack of clarity. Kozlowski still uses a hearing aid in her right ear, but may have to decide in the next few years whether to get a cochlear implant for that ear as well. “If there was another way to go, I’d consider it,’’ she said.

The hearing loss drug candidates from Decibel, Frequency, and other companies such as Swiss biopharma giant Novartis AG are in various stages of development and use a range of approaches — from regenerative medicine, which seeks to engineer new human cells, to a gene-silencing technology called RNA interference to one-time gene therapy treatments that replace defective genes in the ear with healthy ones. All face regulatory hurdles, and company executives won’t speculate how soon they might be on the market.

But the field has been buoyed by some recent high-profile milestones. Late last month, Frequency, which uses technology discovered by noted Cambridge scientists Bob Langer and Jeff Karp, posted encouraging findings from a study involving nine adults in Australia. The company said the study showed its technique of injecting its lead experimental drug into patients’ ears is safe. But further studies will be needed to prove the drug is effective.

The founders of Decibel, which hasn’t yet identified its lead drug candidate, include researchers from Harvard Medical School, Johns Hopkins University, and the University of Michigan. In November, the company formed a partnership that allows it to tap the scientific expertise of Regeneron Pharmaceuticals Inc. of Tarrytown, N.Y., one of the largest US biotechs. Under the deal, Regeneron took an unspecified stake in Decibel, but the Boston biotech retains all commercial rights to its drugs.

“Right now in this space there’s a lot of innovation,’’ said Barbara Kelley, executive director of the Hearing Loss Association of America, a patient advocacy group in Washington. “If they come up with something that can cure or prevent hearing loss, we’re all for it.’’

The drug development activity in the Boston area and elsewhere is “very exciting,’’ said Peggy Ellertsen, 70, a retired speech pathologist from Newton who sits on the hearing loss association’s board. “There are amazing scientists and they’re doing great work. I think a lot of people would be interested in the possibility of a drug therapy.’’

Despite her upbeat tone, Ellertsen, a new grandmother, said she expects to look into the possibility of getting cochlear implants later this year. In part, that’s because she’s not sure when new treatments will be available.

“The first thing I do in the morning is put on my hearing aids,’’ Ellertsen said. “I want to be able to hear my grandson when he starts talking.’’

PREVIOUS ARTICLE
Article 6 of 144
NEXT ARTICLE