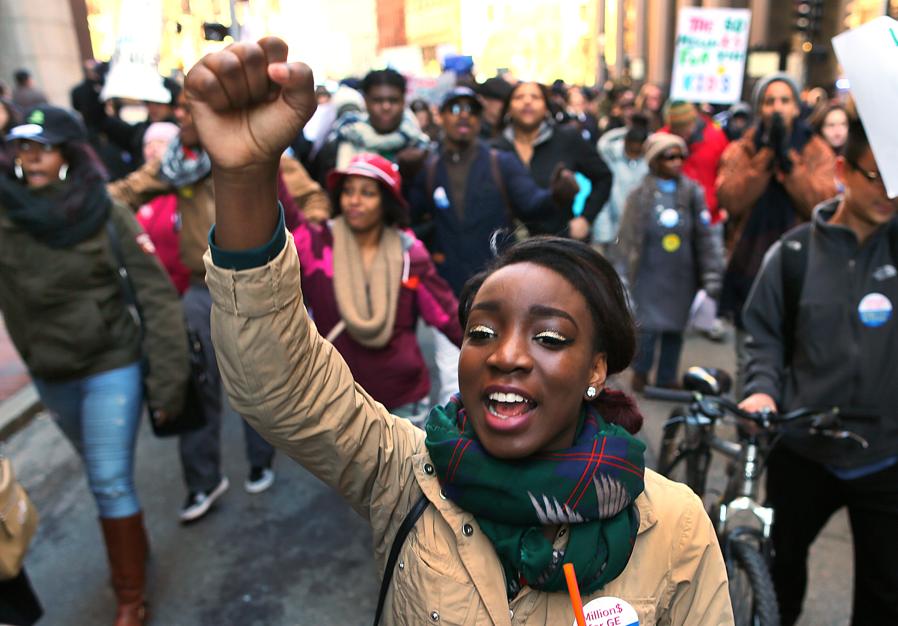 Tina Jagmohan, a 15-year-old sophomore at Boston Community Leadership Academy, delivered an invitation Wednesday to Mayor Martin J. Walsh, urging him to visit her classroom and rethink plans to shrink the budgets of some schools.

“We want him to come to our school personally,’’ Jagmohan said. “Why is he letting this happen to our school?’’

The invitation is part of increasing public pressure being placed on the mayor and schools Superintendent Tommy Chang, who have said individual schools may have to make do with less in the upcoming budget year.

The proposed cuts drew more than 200 people to City Hall, demanding full funding for public schools. The event, which also took marchers to the State House, was part of a national “walk-in,’’ organized by the Alliance to Reclaim Our Schools, a coalition of parents, students, and community groups.

They took their demands and petitions to the offices of the mayor and Governor Charlie Baker as well as to the City Council and state legislators.

“Our young people are listening to what our city officials are saying, and they are watching their education budget be cut. So they are speaking out,’’ said Marlena Rose, coordinator of the Boston Education Justice Alliance, which organized Boston’s protest.

The controversy in Boston began when Chang sent a letter to parents earlier this year estimating a $50 million deficit, a reflection of increasing costs and decreasing federal and state aid. Parents, students, and educators cautioned that the result would be reductions in teachers, librarians, and basic programs.

The Walsh administration later said the shortfall is closer to $10 million.

The calculus of school funding can be dizzying: City Hall spending on education is more than other departments combined. The anticipated $1.27 billion budget for the next fiscal year will actually boost the city’s contribution to education by $13.5 million. But that’s not enough to offset rising costs and decreasing aid from other agencies.

Schools with declining enrollments are more likely to face cuts in their budgets.

“The mayor is working with the School Department to find the right balance of continued support for existing programming and services with investments in new initiatives as they move through the budget process,’’ said Laura Oggeri, the mayor’s spokeswoman.

Chang said it was “reassuring and humbling’’ to see families advocating for quality education. “The district is committed to ensuring students continue to receive equitable access to rigorous and quality instruction for mainstream and special needs students, expanding pre-K, and investing in long-term fiscal planning, among other core initiatives,’’ he said in a statement.

But Lisa Guisbond, executive director of the advocacy group Citizens for Public Schools, said schools could have to trim extracurricular activities and librarians. “Our schools need more, not less,’’ Guisbond said.

Two ninth-graders wrote the letter inviting the mayor to their school. The letter was signed by more than 300 students at Boston Community Leadership Academy in Hyde Park, said Keith Magni, a ninth-grade physics teacher who accompanied students.

The letter takes the mayor’s own words to heart. It quotes his State of the City speech, in which he addressed students directly and told them he wanted them to be part of the conversation about the direction of the city. “Boston Public Schools are my priority,’’ the mayor said.

“We are holding you to this, and we are asking that you come to our school and explain to our students why you are letting this happen,’’ wrote the letter’s authors, Evelyn Vazquez and Leandra Terrero.

Magni said that since the possibility of cuts emerged, officials have been trying to determine how to best serve students, including many with autism and emotional chal-lenges. So far, they have not heard directly from the mayor.

“We’ve been to . . . School Committee meetings and haven’t seen the mayor,’’ he said. “If this is the way it has to be, then he has to come out and face the public.’’

Veronica Medina, a 16-year-old at the school, said students and faculty are reeling from the proposed budget reduction. The mayor, she said, should be able to see the impact on students.

“If he injects himself into our daily pain, he would understand what we are going through,’’ Medina said.

Irons can be reached at meghan.irons@globe.com.

PREVIOUS ARTICLE
Article 44 of 130
NEXT ARTICLE