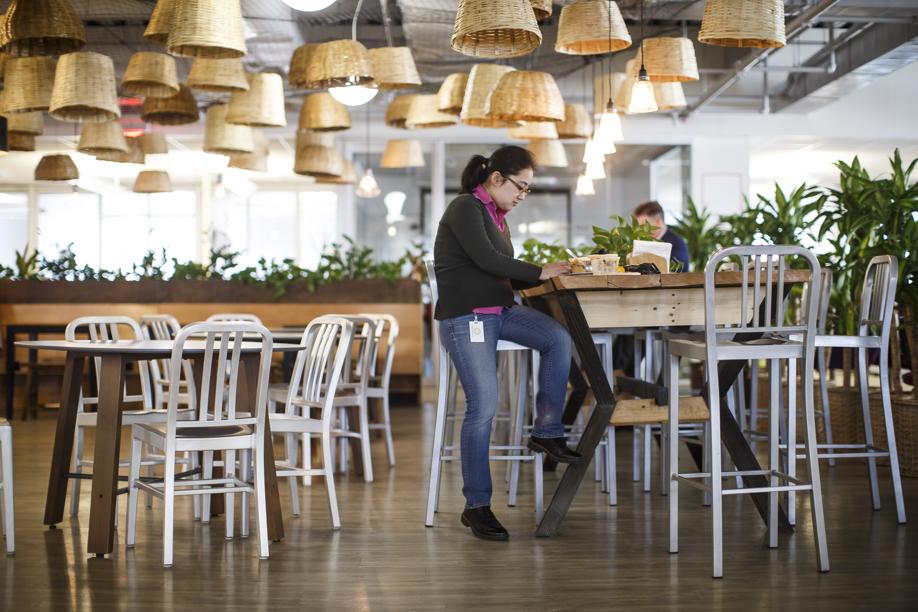 The Boston area has experienced a boom in co-working spaces. Solo entrepreneurs can rent a desk, while larger teams can rent private offices, without worrying about things like replenishing the copier toner. This map shows a selection of the larger co-working spaces, including some set to open later this year. (David Butler for The Boston GlobePhotos by Keith Bedford/Globe Staff) 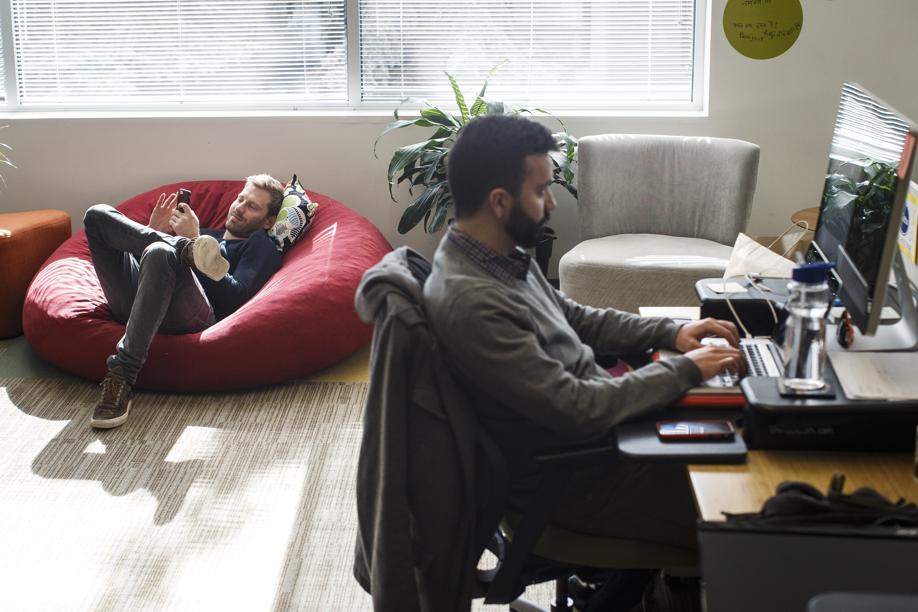 NGIN Workplace in Cambridge has desks and a lunch space. Private offices can be had, too — those start at $1,000 a month. These shared offices charge based on factors like how many desks you require or how many hours you need in a conference room. 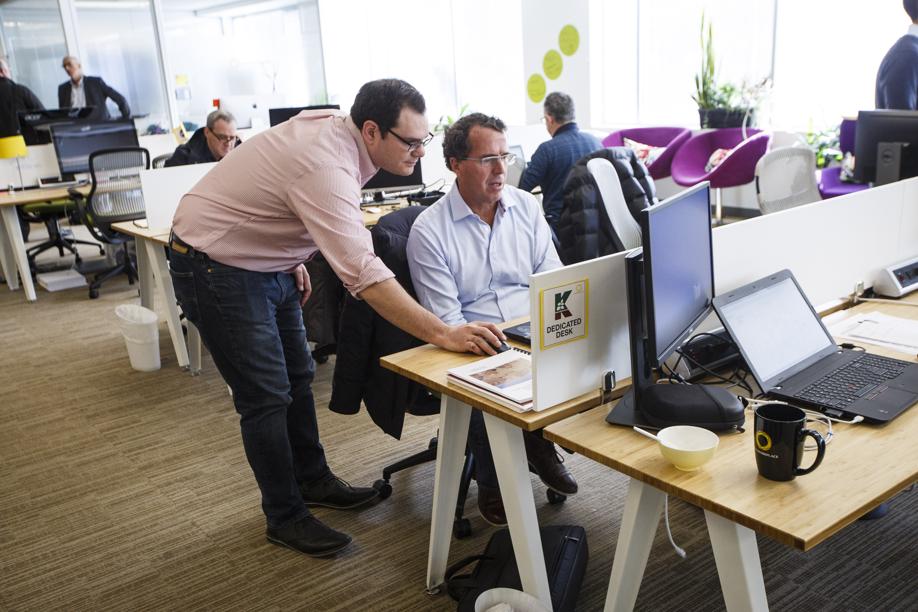 A decade ago, the concept of “co-working’’ was still in its infancy in Boston. Grown-up companies had a security guard in the lobby, their name on the wall, and a collection of cubicles or private offices. Who would want to plunk their laptop down in an open space populated by total randos from other companies and industries?

In 2007, setting up a co-working space in these parts meant skirting the specifics of a lease and occasionally annoying the neighbors — a Cambridge shared office for programmers and entrepreneurs called Betahouse operated out of a brownstone apartment on the edge of Central Square. When I dropped by that July, there were about 20 tenants, and at noontime most everyone took a break and gathered for a communal barbecue lunch.

Betahouse only survived for three years, but it represented the first rumble of a tectonic shift in the way sole proprietors, startups, and even some employees of larger companies work. In Central Square today, Workbar operates two floors of co-working, and WeWork, a Manhattan-based company, next month plans to open a co-working office that will fit about 550 desks. Other co-working spaces have sprung up around Somerville, Boston, Chelsea, and Acton, with more planned for Back Bay, Brookline, Harvard Square, and the Fenway neighborhood.

“It’s just like cloud computing,’’ says Dave McLaughlin, East Coast general manager for WeWork. Initially, he says, many companies were wary of storing their data “in the cloud,’’ on computers owned and operated by a tech player such as Amazon or Microsoft. But over time, they were won over by the cost advantages of not having to buy and continually upgrade their own data centers.

“There was a moment five or six years ago when enterprises finally started coming to the cloud,’’ McLaughlin says. “That’s roughly the moment we’re at, in terms of how a broader array of companies are thinking about co-working. It lets them be more efficient with capital.’’

Just as cloud services rack up monthly costs based on how much data storage you’re using, these shared offices charge based on factors like how many desks you require or how many hours you need in a conference room. A single “dedicated’’ desk at WeWork’s location near South Station costs $450 a month and comes with its own filing cabinet, but you pay just $350 if you are willing to grab whatever free spot is available when you show up in the morning, and you don’t care about stashing stuff in the office. Private offices can be had, too — at NGIN Workplace in Cambridge, those start at $1,000 a month.

The operator of the space keeps the wireless network up, the printers full of paper, and the coffee brewed, taking care of most of the tasks done by an office manager or IT staffer in a traditional office arrangement.

Co-working can help remote workers such as Steph Yiu — who works in Cambridge for a San Francisco company — feel less isolated. “As an extrovert,’’ she says, “I wouldn’t have been able to keep my remote job without a co-working space like Workbar.’’

Chris Regan is chief executive of RF Venue, a maker of audio gear in Ashland, but he also has a membership at Workbar’s Somerville location for the day or two each week when he feels like commuting by bike rather than car. (Regan lives near Davis Square.) Others cite the schmooze factor: You meet professionals who might become customers or vendors as your company grows or who simply offer some helpful advice.

As with anything shared, there also are negatives. Carolyn McCrae works for a startup based in Greentown Labs in Somerville, where you can’t bank on a conference room being available on short notice, she says, and the open work area “can be noisy.’’ (I’ve been a paying customer of both Workbar and WeWork at various times and can vouch for the value of a good pair of noise-canceling headphones.)

WeWork’s South Station location has “all the distraction of an open office, [with] none of the collaboration,’’ says Ian Marlier, an engineering executive at a software company. Marlier adds that he’s not a fan of the current beer WeWork offers on tap, Mighty Squirrel, though he acknowledges that as “a minor complaint.’’

Larger companies also seem to be warming up to the idea of letting someone else manage their satellite locations. “For companies with a sales office or engineering office that has 10 or 15 people, they’re saying, ‘We don’t need to run our own space anymore,’ ’’ says Bill Jacobson, chief executive of Workbar, which operates a network of 18 spaces around Massachusetts, including some inside Staples retail locations. “And for some workers, it’s just a better alternative to working from home or working from a coffee shop.’’

Liberty Mutual and Amazon both have plans to put employees into WeWork’s Back Bay location, which opened in January. Liberty Mutual spokesman Glenn Greenberg says that while the site is just a few blocks from the company’s headquarters, it offers a different environment — and the opportunity to rub shoulders with startups — for about 100 employees who work on the insurer’s innovation team. “The space provides some separation from the core business both in terms of location, and look and feel, to empower our employees to think beyond insurance,’’ Greenberg explains in an e-mail.

The big question looming over the shared office industry is who would get stung more by an economic downturn. Right now, traditional landlords and operators of co-working space are benefiting from a rising tide in most big cities; the current office vacancy rate in Cambridge is the lowest in the country at 3.8 percent, according to real estate firm CBRE New England. But if the startup sector shrinks, or larger companies start eliminating branch offices, will they cut the number of desks or private offices they rent at co-working spaces — where they’re not locked into long leases? Or could they instead decide to shutter traditional offices and send the survivors to a Workbar or WeWork?

While traditional landlords at first viewed co-working as too tiny of a trend to worry about, some are now looking at co-working operators as potential partners — or at least good tenants. At a building on Boylston Street owned by Equity Office Properties, Workbar will open a 12,000-square-foot shared space this summer. “It’ll bring some energy to the building,’’ Equity senior vice president John Conley said. “Workbar hosts a ton of events that will be accessible to our tenants, and if someone in the building has a vendor or consultant who needs to come and work near them for a few weeks, they’ll be able to rent them a desk at Workbar.’’

Another co-working space, The Yard, plans to open this fall at 200 Clarendon (formerly the John Hancock Building), owned by Boston Properties. And Regus, the Luxembourg-based operator of buttoned-down business centers, in February opened a location on Newbury Street, part of a sub-brand called Spaces that has a more contemporary and open feel.

“Co-working is growing and will continue to grow,’’ Conley says. “It’s still underrepresented in Boston, compared to New York City.’’

That gives workers and companies a range of options to choose from, with different décor, pricing, and even coffee varietals.

Marketing consultant Giuseppe Frustaci says that as an introvert, he found the C3 co-working space in Kendall Square too distracting. “Fifty percent of workers are introverts,’’ he says, “but no spaces are designed for us.’’

So he found a spot at a co-working space on Beacon Hill that doesn’t advertise itself as one. At $300 annually for membership, it’s far cheaper than anything else on the market. Frustaci says it has phone booths for making calls, and the “fastest Internet in Boston,’’ not to mention sculptures by Daniel Chester French and paintings by John Singer Sargent. Three days a week, when he’s in town, you can find Frustaci and his laptop at an antique desk on the fifth floor of the Boston Athenaeum, founded in 1807.

PREVIOUS ARTICLE
Article 79 of 227
NEXT ARTICLE