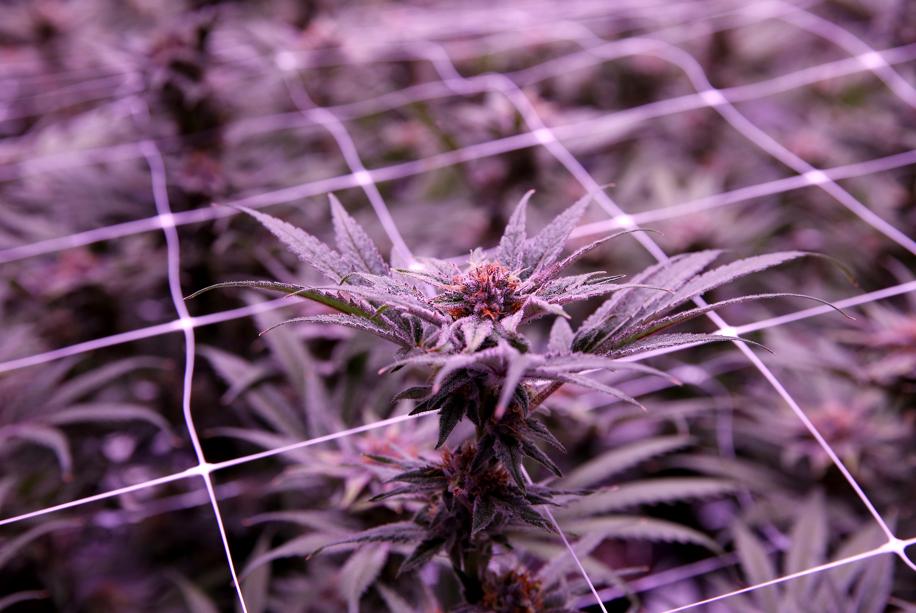 FITCHBURG — On a recent weekday, a parade of construction workers in hard hats and reflective vests shuffled into a century-old brick mill building on the banks of the Nashua River, carrying tools and clipboards. Outside, another crew carefully hoisted a massive pump up to an open barn door on the second story.

No, the textile and manufacturing companies that once defined this city aren’t making a comeback. Instead, the bustle of activity here is a snapshot of the marijuana building boom underway across Massachusetts, as cultivators who once served only the medical cannabis market race to increase their capacity in advance of the debut of recreational pot sales this summer.

“We have three retail stores in excellent locations, and we need product capacity to fill each and every one,’’ said Keith Cooper, chief executive of the medical marijuana company Revolutionary Clinics, which is tripling the size of its growing operation in the Fitchburg mill.

“We’re also going to begin a robust wholesale business for other retailers that aren’t going to cultivate.’’

All of which raises the question: Is Massachusetts growing enough pot right now to satisfy residents and tourists when sales begin in a matter of weeks?

The short answer: almost certainly not. Some cannabis economists are warning of a serious shortage, at least at first.

Calculating the amount of marijuana Massachusetts will consume — and, in turn, how much must be grown and the price for which it can be sold — is the daily work of a small army of consultants hired by cannabis operators. Their estimates span a surprisingly wide range, a reflection of the long list of variables in play as the industry gets underway.

Among them: cultural acceptance of marijuana consumption, how quickly consumers forsake the illicit market for the regulated one, local restrictions, the pace at which the Cannabis Control Commission will issue licenses, the density and distribution of retail outlets, the scarcity of available real estate, and even the tight construction labor market.

“Between all the moving parts, it’s hard to get a handle on exactly what the marketplace will be here,’’ said James McMahon, executive director of the Massachusetts Cannabis Business Association. “Even if you get a license, where are you operationally? Where’s your roofer? What’s your plumber doing today? In the summer building season, these crews get overstretched. And then there’s the real-world time it takes to actually do the construction and grow and harvest the plants.’’

Rob Hunt, a California-based cannabis business consultant with clients in Massachusetts, believes companies here will eventually need to grow about 290,000 pounds of marijuana annually to serve a $1.8 billion-per-year market. But change one or two underlying assumptions and the real amount could be as low as 154,000 pounds or as high as 545,000 pounds, according to Hunt’s model.

By way of comparison, registered medical marijuana patients over the past year purchased about 20,000 pounds of cannabis, according to the state Department of Public Health. But since last summer, the number of registered patients has jumped by more than 10,000 to 55,150, and the number of dispensaries approved to sell medicalmarijuana has grown to 31 from 12.

Hunt’s best guess is that Massachusetts will experience a short-term supply crunch and high prices, given the slow pace of the state’s recreational rollout. A similar scenario played out last year at the debut of Nevada’s recreational market, when wholesale prices spiked to over $4,000 a pound, compared with an average of around $2,400 in more mature markets, such as Colorado’s.

“There isn’t even close to enough [supply],’’ Hunt said. “Whoever opens first is going to get a tremendous amount of traffic, and they’re not going to be able to keep products on the shelves. It’s impossible.’’

Indeed, Massachusetts’ current marijuana supply appears to be well below even the most conservative estimates of recreational demand.

According to some back-of-the-rolling-paper math by the Boston law firm Prince Lobel, the growing facilities currently operated by the state’s medical marijuana groups (most of which plan to enter the recreational market) could turn out roughly 138,500 pounds a year at maximum capacity.

But not all of those medical growing facilities are fully built out. And not all will join the recreational market at first — or ever, in some cases — thanks to municipal restrictions and the intensive process of winning a license. The real total, therefore, is probably much lower. And since marijuana cannot legally be imported from elsewhere, that leaves the state significantly short of Hunt’s 290,000-pound estimate of demand in a mature Massachusetts market.

However, with numerous growing facilities under construction in Massachusetts, Hunt and other consultants actually foresee the opposite problem in the future: oversupply.

That problem could be compounded if nearby states also implement commercial pot markets, stemming the flow of out-of-state cannabis shoppers to Massachusetts.

“In three or four years, we’re going to have too much infrastructure,’’ Hunt said.

That seems to be what happened in Oregon, where marijuana companies are going out of business amid a cannabis glut and the accompanying free fall of prices. That has drawn attention from federal prosecutors, who suspect excess cannabis is being diverted to the illicit market or to other states.

Massachusetts regulators opted not to impose a statewide cap on the amount of marijuana that can be grown or the number of cultivators, skeptical of handing out a limited number of “golden tickets’’ to well-connected and well-capitalized operators who would then face little competition.

But the Cannabis Control Commission has taken other steps it hopes will prevent an Oregon-like scenario from happening here. For example, its regulations limit each company to 100,000 square feet of “canopy’’ — essentially, the area of a building or field used to actually grow plants.

The commission also mandates that cultivation companies sell nearly all of the marijuana they grow; those that can’t offload at least 85 percent of their product to licensed manufacturers or retailers will get knocked down to a lower tier of cultivation license that allows for a smaller canopy area. The idea is to make it risky for large cultivators to overbuild and force those that do to reduce output.

(Another expected benefit: leaving room in the marketplace for smaller-scale, craft marijuana producers.)

Then again, licensed operators also lose out if supply is limited and prices are too high. In that case, the heavy consumers who represent an outsized proportion of demand would simply continue to buy marijuana on the illicit market or grow their supply at home.

“For the first three years, there’s not as much concern about production,’’ said Andrew Livingston, director of economics and research at the marijuana law firm Vicente Sederberg. “You’re really concerned about driving the heaviest consumers, who likely have the longest-standing and most secure illicit market connections, into the legal market. And the best way to do that is by lowering the price of cannabis.’’

Most Massachusetts medical marijuana operators currently charge over $300 for an ounce of marijuana flower. Livingston says that’s “not even close’’ to cheap enough; the average price of an ounce in Denver, for example, has dropped well below $200.

Capturing dedicated consumers and preparing for a potential price crash make efficiency a top concern for any cultivator.

In Fitchburg, Cooper, the chief executive of Revolutionary Clinics, has opted to spend more money upfront on a mostly automated growing system. Industrial computers precisely control the flow of water and nutrients to the plants and optimize the on-off lighting cycle that prompts cannabis plants to flower. To further save on its utility bills, the company also cycles water in and out of decades-old wells drilled by former industrial tenants of the mill to cool off growing areas, which between the respiration of the plants and hot lights overhead can quickly become stifling.

“It’s all about optimizing our footprint,’’ Cooper said. “When we’re done here, we expect to be the lowest-cost provider in the state, if not the country, for indoor growing.’’

PREVIOUS ARTICLE
Article 5 of 125
NEXT ARTICLE