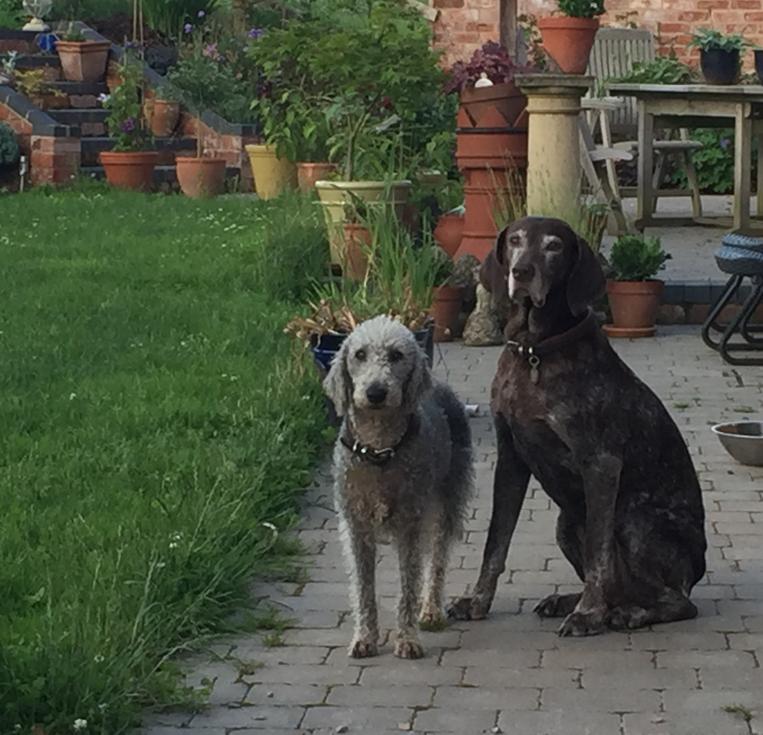 Denise Thorp’s dogs, Ruby and Velvet, in the garden of her home in England. (Denise Thorp) 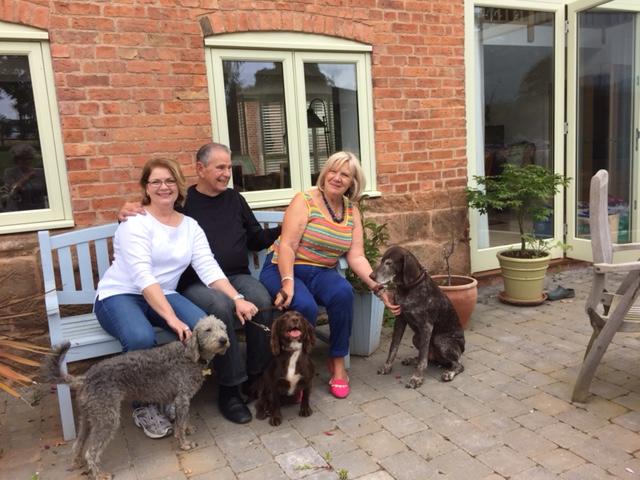 Pet sitters Avie Abramowitz and Jeanne Hyler (left) traveled from Orlando, Fla., to sit for Denise Thorp’s dogs at her home in England while she went on vacation.
By Janet Mendelsohn
Globe Correspondent

We were in Alaska when the British woman told me that pet sitters come from around the world to take care of her dogs for free. Did she say free? “I couldn’t afford to be here otherwise,’’ Denise Thorp replied. “A sitter costs as much as another holiday.’’ Instead, she relies on a global community of people who share her love for animals and travel. They find each other on Trusted Housesitters, a UK-based website with members in more than 130 countries.

Thorp lives in the village of Little Witley in Worcestershire, near the Cotswolds, Stratford-on-Avon, and a former royal estate. Her home is a newly modernized barn. In return for free lodging, pet lovers provide affection and care for “her girls,’’ Velvet and Ruby. They experience life in the English countryside, meet Thorp’s neighbors and shopkeepers, get invited to parties. The dogs are natural conversation starters.

Founded in 2010, Trusted Housesitters charges a membership fee of about $9 per month. That’s all, although a few homeowners charge for utilities, firewood, and the like. A few expect sitters to provide services in trade, such as painting, generally mentioned in their online profile. Pet sitters currently outnumber homeowners on the site.

“The pet sitters are vetted,’’ said Thorp. “They have to write a profile about themselves and make available documentation so you know your animals and home will be secure.’’ Homeowners indicate the dates they need a sitter and describe their house and animals — dogs, cats, horses, chickens, birds, guinea pigs, reptiles are all there — with photos and basic expectations, from animal care to watering gardens. Members find a match. E-mails fly back and forth.

As the sun set over a pod of whales we’d been watching, Thorp showed me cellphone photos of Ruby, her Bedlington terrier, and Velvet, a German short-haired pointer, romping in gardens, riding shotgun on drives down scenic rural lanes. “They are high maintenance,’’ she said. “Lots of lovely walks and long drives in my car. Lots of tummy rubs. Kennels are out of the question and no one nearby has time to care for them.’’ But confident her girls are in good hands, she’s been to Thailand, the Balkans, and the Dominican Republic while they are comfortable at home.

An Australian photographer stayed with them for five days, then pet sat again in Austria. A New Zealand couple cared for them during eight months in the UK to be near their daughter.

“It has been one of the best experiences of my life,’’ said another, Rhonda Bower, when I reached her by phone at home in Colorado. “It has made the world smaller.’’ Bower lives on a “mini-ranch.’’ From 9 to 5 she is the executive assistant to the COO of an oil and gas company. After hours, her “fur-baby’’ time is spent with horses, a cat, and a Black Lab named Corkie. She’ll take care of any kind of farm animal, but not reptiles.

At first, the idea of going abroad alone this way scared her. “I didn’t tell many people because I knew they’d say it wouldn’t be safe but it was,’’ she told me. “I wanted to see castles. It’s a bucket list thing. So I searched house/pet sitting postings in England, Scotland, Germany, and elsewhere. Denise reached out right away. Then I heard from a woman named Debbie who happened to live an hour from her. We connected over e-mail. While I was at Denise’s home for two weeks, Debbie and I met for four hours, talking like old friends. She invited me to come back to visit in 2017 so she can share Scotland with me. The lasting friendships built through this experience are such a bonus.’’

As part of the vetting process, prospective pet sitters complete profiles including relevant animal care experience and references. They are required to provide a copy of their police record, if requested. Bower learned how to obtain hers from the Colorado Bureau of Investigation. She also got a copy of her motor vehicle driving record since she’d be exploring the region with Ruby and Velvet in Thorp’s car. Addresses and phone numbers are private until both sides approve the match.

“Denise had me come two days early so I’d get comfortable with her home and dogs. We clicked right away, talking about life, kids, marriage, sad and happy times. The poor woman even gave me driving and navigation lessons in England. She invited friends over to meet me. Surprisingly, they invited me to see their homes and gardens. She opened her world up to me. Leaving Denise and the girls was very emotional.

“These homes are not sterile like rental properties,’’ said Bower. “Their memories and possessions are out there. You know you’re being trusted. It’s such a compliment. Best of all, it’s wonderful to come home to pets who learn to love and adore you.

“I didn’t realize I’d be an ambassador for Americans,’’ Bower added. “You hear people don’t like Americans but I didn’t find that at all in the English countryside. I was welcomed. They had questions. They wanted to show me local, very British places and things that are important in their lives. When I opened my mouth, they heard my accent and wanted to buy me a pint and help me with local customs. Many times I thought, ‘I can’t believe I’m doing this, that these are going to be my stories.’ ’’

Avie Abramowitz and his wife, Jeanne Hyler, sounded so knowledgeable about Velvet, Ruby and the community that I was surprised to learn their visit with Thorp was still to come. Retired and living in Orlando, they escaped Florida heat this summer by dividing their time between a chalet in Switzerland and five pet-sits in England. They are so enthusiastic about their experiences that they answered my e-mail by calling with anecdotes three times. Yet not all has gone well.

One stay was in a stately home built in the 1800s with a beautiful garden. “Cleanliness was not the homeowners’ priority,’’ said Abramowitz. “In their minds, it was comfortable and livable. To us it was not. But we really liked the people and their pets. Afterwards, they gave us a glowing review. You need to be resilient.’’ Thorp’s is the only one of the five homes they would return to.

So for 2017, Abramowitz and Hyler incorporated “pre-vetting’’ into their English vacation. “I get contacted for 20 to 25 potential house sits a day,’’ he said. “When I get an e-mail that shows the house, not only pets, we arrange to go there and take the dogs along. We’ve met some fabulous people.’’

At a beautiful 17th century manor house, they met a titled occupant whose family story is chronicled in a book of local history. They agreed on a date for next year. Alternatively, Hyler suggests requesting kitchen photos because they reveal the age of appliances as well as the habits of those who live there. “We like things neat and clean,’’ she said. “The homes where we sit are always cleaner when we leave than when we arrive.’’

Several days into their stay in Little Witley, we spoke again. They were excited about going to hear a neighbor play ukelele at a festival. Later they were hosting a cocktail party for friends Denise Thorp had introduced them to. One of the dogs had been briefly ill. They’d taken her to the vet and now she was fine.

“We have a large group of friends in Orlando. None of them would do this,’’ said Abramowitz. “They . . . prefer a Ritz Carlton or cruises that drop you off in port so you just see a tiny bit of the area. Nothing like this. It’s an adventure, and it helps keep me young.’’

Janet Mendelsohn can be reached at janet@janetmendelsohn.com.

PREVIOUS ARTICLE
Article 127 of 217
NEXT ARTICLE