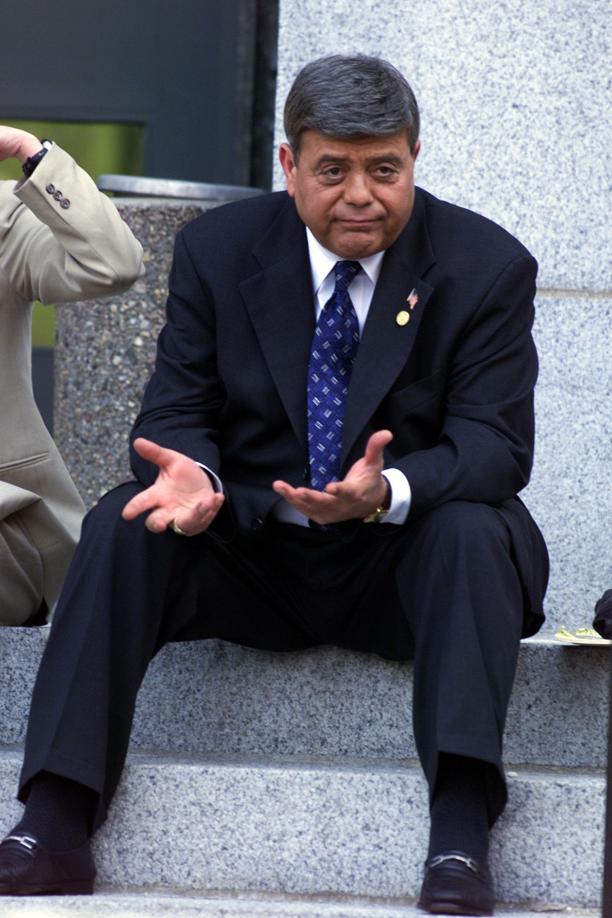 Buddy Cianci, a longtime mayor of Providence and an avowed rogue, said he had a lifelong love for the city. He served six terms in office, and several years in prison. (Tom Landers/Globe staff/file 2002)
By Kevin Cullen
Globe Staff

Back in 2008, there was a reunion at J.J. Foley’s, the venerable South End tavern, to mark the 25th anniversary of the 1983 Boston mayoral election pitting Ray Flynn against Mel King.

It was a quintessential Boston event, attracting a cross-section of those who had worked on those campaigns and then went on to run the city or, in King’s case, advocate for those who didn’t have access to power.

But, tucked in a corner of the backroom at J.J’s, was someone I didn’t expect to see: Buddy Cianci, the longtime mayor of Providence and avowed rogue.

He pulled me in and, in a stage whisper that conveyed both amazement and delight, said: “Isn’t this great?’’

Buddy was attracted to political theater like a moth to a porch lamp. He couldn’t resist its magnetic pull, its incandescent light. He was often the star of such theater, a curious mix of tragedy and farce, and he relished it.

He served six terms as mayor, not to mention a term in prison. Buddy Cianci was to the politics of Providence what James Michael Curley was to the politics of Boston. His critics called him shameless. He basked in their outrage. The old timers up on Federal Hill used to say Buddy had faccia tosta, which is basically Italian for chutzpah.

He had a big heart, and he wore it on his sleeve. But, like a lot of politicians who do a lot of good things for a lot people, he had a sense of entitlement that got him into trouble.

Self-doubt did not occupy a space in his closet.

“When you spend your weekends kissing elderly women with mustaches,’’ he liked to say, “you can make the decisions.’’

That sort of confidence served Buddy well when he did so much to transform Providence from a crumbling industrial city into a gleaming modern capital. If they could have gondolas in Venice, Buddy used to say, they could have them in Providence. And they did.

But scandal followed Buddy around like a forlorn puppy, from the moment he was able to capture City Hall at the shockingly young age of 32. In his first three terms, so many aides and city workers and contractors were convicted of corruption that the perp walk became the unofficial city dance.

Buddy dodged all those initial indictments, but his temper got the better of him.

I first met Buddy in 1984, when I was a young reporter at the Boston Herald. He had just pleaded no contest to using an ashtray, a fireplace log, and a lit cigarette to express his displeasure with a man who had become the lover of his estranged wife.

Buddy left the courthouse and walked back to City Hall, which, as part of the deal, he was forced to vacate. A media scrum surrounded him.

He knew all the other reporters, but I was a stranger, with no local knowledge. That was good. That meant I could be swayed.

It was my first introduction to the circus, or Circus Maximus, that was Buddy Cianci. In the course of that walk, TV cameramen were falling down, bumping violently into light poles as they walked backward to film Buddy’s defiant stroll. Buddy stepped over them, like a running back leaving would-be tacklers in his midst. He pushed microphones away like tree branches in the bush.

Having resigned in disgrace, now in possession of a criminal record, he made what seemed like a natural transition, to talk radio host. He was good at it, largely because he was funny and smart and had little or no filter.

Inevitably, Buddy ran for mayor again, and inevitably he was elected, and inevitably he got in trouble again. He was indicted in 2001 as part of Operation Plunder Dome, which showed beyond any reasonable doubt that everything in a Cianci City Hall was for sale and could be purchased. Buddy got five years, and when he got out of prison in 2007, he went back to radio and TV.

But Buddy could not resist the chemical rush of politics. TV and radio paid the bills. Politics paid his soul.

About two years ago, at 73, Buddy was diagnosed with cancer. He decided on an aggressive form of treatment: chemo, radiation, and running for mayor again.

If Curley could have a Last Hurrah, why couldn’t Buddy?

In November of 2014, I drove down to Providence on Election Day. It was, in political terms, like watching Ted Williams’s last at-bat. Teddy Ballgame hit a home run. Could Buddy?

Up on Federal Hill, Buddy’s beating up a guy who was messing around with his wife was seen not as a transgression as much as an act of honor. Inside Old World Cigar, on Atwells Avenue, the men who puffed stogies were old enough to remember when Providence was a dump and that it was Buddy who made the city shine.

Sitting at the bar at Andino’s, an old woman was convinced Buddy’s final administration would be scandal-free.

“He doesn’t need to steal anymore,’’ she said.

But it wasn’t meant to be. Buddy remained popular with those who had lived in Providence for generations, but a lot of them had moved out to Cranston and beyond. When Buddy first rose to power, Italians made up the biggest voting bloc in Providence. Now, it’s Latinos, and most Latinos were with his opponent, Jorge Elorza, the son of Guatemalan immigrants. Buddy got 45 percent of the vote.

On the ballroom floor of the Hilton, at the very foot of Atwells Avenue, Buddy walked in just after 10 o’clock, after the election had been called for Elorza.

Before leaving, he spoke about the great love affair of his life, with the city of Providence.

It ended Thursday, in Providence, the one in Rhode Island, where the old world shadows hang, heavy in the air.

Kevin Cullen is a Globe columnist. He can be reached at cullen@globe.com. Follow him on Twitter @GlobeCullen.

PREVIOUS ARTICLE
Article 33 of 162
NEXT ARTICLE