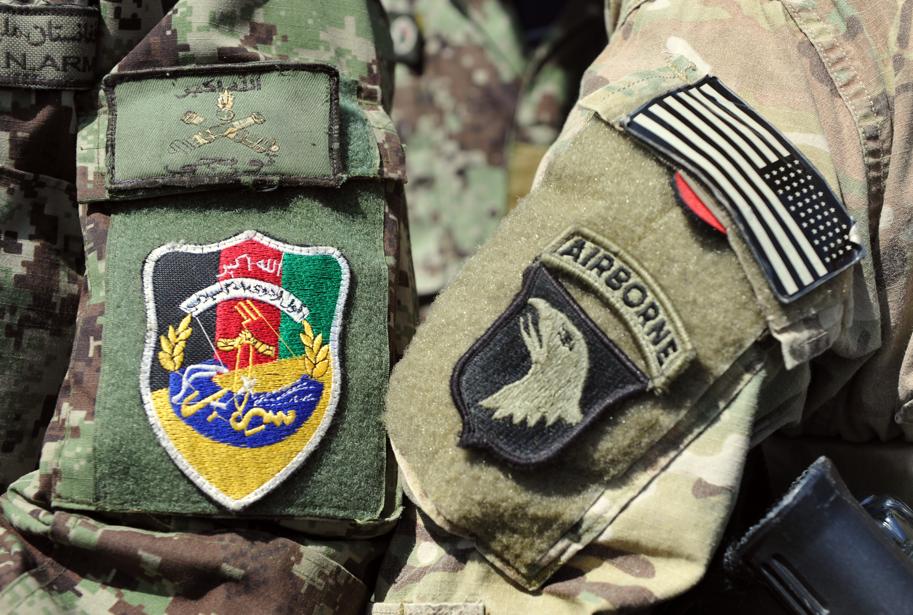 The arm badges of a US soldier and of a soldier in the Afghan National Army during a training session in Afghanistan in 2013. (file 2013/AFP/Getty Images)
By John Rodriguez

On the last day with my platoon, the crack and whiz caught us at the edge of the village. Trapped in the ambush, I ducked for cover.

As the enemy machine gun fire tore the air, I steeled myself to make the dash across the 15 meters of open trail separating me from my forward observer, our link to fire support and salvation. But then, Jackie stood up and laid down suppressive fire despite being completely exposed in the middle of the kill zone. I used his fire to cover my sprint to the forward observer. Jackie’s actions were in the best tradition of American soldiers — but Jackie was neither American nor a soldier.

Jackie was my Afghan interpreter. Fighting wasn’t in his job description, yet Jackie didn’t hesitate to act and risk his life to protect the lives of the Americans he worked with, he lived with — his friends.

When Donald Trump and other politicians talk about barring all Muslim refugees to the United States — or seem to treat “Muslim’’ as synonymous with “terrorist’’— I think of Jackie. Jackie was our nickname for him because he reminded us of Jackie Chan. Jackie was a Hazara, an Afghan ethnic minority, and had Asiatic features; he was also a badass. I worked with other several other interpreters such as Jay, Sean, and Mike Jones. The reason for these nicknames wasn’t to be cute, or funny, but for protection.

As a soldier, I risked my life, but I never had to fear that my family would suffer for my military service. Recent Islamic State threats on social media, however exaggerated, to attack US military families and service members in their own homes have caused some alarm. But in Afghanistan, the dangers faced by interpreters and their families are not mere threats. Interpreters have been tortured and killed. The Taliban has murdered their families, including children. The United States has a Special Immigrant Visa program to help Iraqi and Afghan interpreters come to America, but this process is slow and laborious. Interpreters have been executed awaiting their visas.

Interpreters like Jackie are not my only Muslim brothers-in-arms. I fought alongside Afghan National Army soldiers throughout my deployment. An Afghan platoon commander whom I fought alongside in multiple firefights explained over chai that he considered himself a true mujahedeen because he was fighting for the future of his country, and his people.

Last November, as politicians outbid each other with anti-Muslim rhetoric, I was at a military course where I worked in a small group that included an Egyptian-American Muslim officer. He had served in multiple dangerous overseas posts because he is a patriotic American citizen who believes our nation and what we stand for are worth fighting for.

Muslims are the most frequent victims of terrorism from groups like ISIS, the Taliban, and Al Qaeda. They are also our best allies in fighting terrorism — not only on the physical, but also on the political and ideological battlefields. In the most recent Republican debate, Governor John Kasich and former governor Jeb Bush correctly argued that we must work with regional partners to defeat ISIS but that demonizing Muslim refugees weakens this anti-ISIS coalition. Still, even Kasich wants to ban all Syrian refugees, while candidates like Senator Ted Cruz want to refuse entry for refugees from any country with a significant ISIS presence.

Jackie now lives in the United States, free from terrorism (and a President Trump or Cruz, at least for now). But I worry about the state of our national dialogue. To pundits who say “So what? They’re Muslim,’’ to justify turning our backs on refugees, I ask, when have you put service to country above yourself like the American Muslims serving in and out of uniform today? To the politicians who paint all Muslims with a broad brush and fan the flames of anti-Muslim bigotry, I ask, when have you risked your life for our country like Jackie did?

None of the remaining presidential candidates, Republican or Democratic, have military experience, and they may not have seen Muslims fighting and sacrificing to defeat terrorism. But I served, I saw, and I remember.

PREVIOUS ARTICLE
Article 111 of 226
NEXT ARTICLE