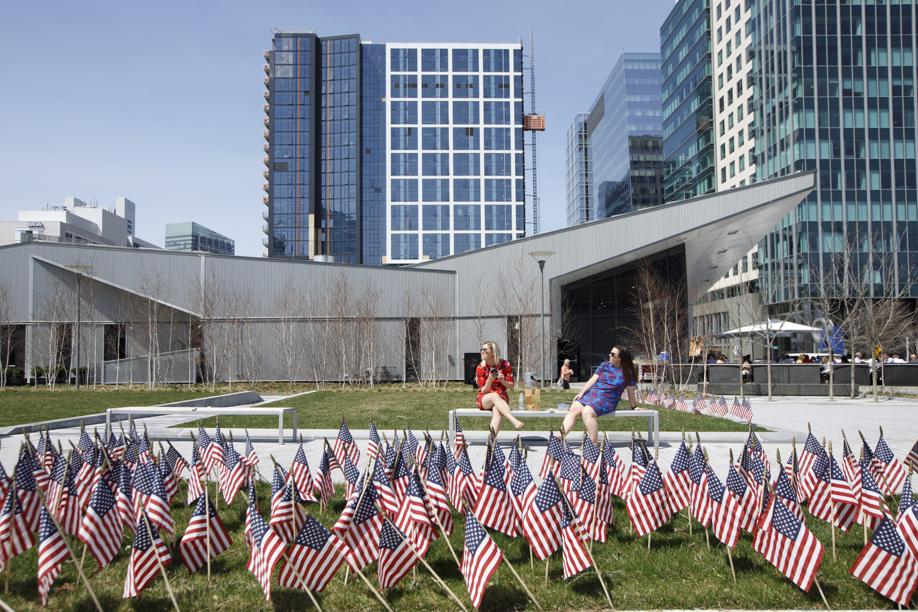 Women enjoy the weather on a bench outside District Hall on Tuesday. The building, opened in 2013, wasn’t intended to be permanent. (Keith Bedford/Globe Staff) 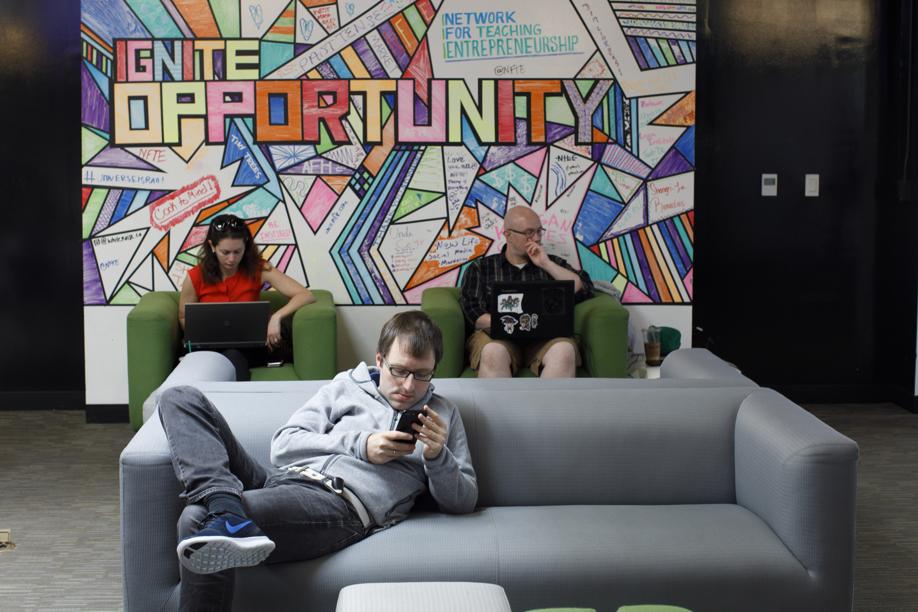 People used the shared work space at District Hall on Tuesday. Many come to hang out in the lounge and use the Wi-Fi. (Keith Bedford/Globe Staff)
By Tim Logan
Globe Staff

If there is one thing that everybody loves about the Seaport, it is District Hall.

Part meeting space, part startup hub, part living room for the bustling business district, the low-slung building among the towers lining Seaport Boulevard is the closest thing to the kind of civic space that many say Boston’s newest neighborhood is sorely lacking.

But as developers and the city hash out plans for the next wave of building in the Seaport, District Hall’s long-term future is unclear. Discussions over the next few months may determine whether District Hall stays put or moves into a new building — with the risk of losing its cool.

Opened in 2013, the building was never intended to be permanent. The original plan was for District Hall to relocate into another building after 10 years, with the one-story facility torn down and replaced with another amenity the Seaport is starving for: a park.

District Hall is within a 13-acre portion of the Seaport Square property that was acquired by WS Development in 2015. Earlier this year, the company submitted plans to build out the rest of the property — keeping District Hall in its current building, for now. Importantly, the park that was part of the original 2010 plan is not in WS Development’s latest version, while a new office building would go up on the same block.

The owner of the neighboring property, developer Joe Fallon, criticized the loss of park space in a recent letter to the Boston Planning & Development Agency, which is reviewing the proposal. If District Hall stays, and a new office building goes up on the same block, the combination would effectively cut back on the already-scarce commodity of open space in the Seaport.

“It cannot be appropriate to provide less open space when asking for’’ a new building, Fallon Co. attorney Myrna Putziger wrote in the letter.

Fallon suggested putting District Hall inside another building at the end of its 10-year run in 2023. That idea has some of its fans worried the meeting space won’t be as popular or accessible subsumed inside an office block as it is a standalone building with its own singular identity.

“I think we should keep it,’’ said Bud Ris, a former chief executive of the New England Aquarium who has been active in waterfront planning. “There is more ‘life’ there than any other place in the Seaport.’’

The building was created as an experimental “public innovation center,’’ a hub for the onetime industrial waterfront that then-Boston Mayor Thomas Menino renamed “the Innovation District.’’ Seaport Square’s previous owner, Boston Global Investors, built District Hall for $7 million as a public benefit at the start of its decades-long project. The city leased its operations to an offshoot of the Cambridge Innovation Center, the Venture Cafe Foundation, for a five-year term, at $1 a year, with an option for five more years if things went well. And they have.

“It has been super successful,’’ said Brian Dacey, president of the Cambridge Innovation Center. “It has really become a linchpin of the Seaport.’’

Since its opening, District Hall has hosted more than 2,300 events — tech talks, networking meetups, product displays — with more than 102,000 attendees. Venture ­Cafe estimates nearly 100,000 more have come to hang out in the lounge and use its free Wi-Fi and dry-erase IdeaPaint walls to sketch ideas. Its restaurant and bar, Gather, has emerged as a popular after-work spot for Seaport denizens, while its coffee shop is popular during the day.

“People come in here and they see something cool and happy. The whole place is meant to be open and welcoming,’’ said District Hall director Becky Donner. “And they love writing on the walls.’’

Importantly, District Hall is its own place amid the glass office boxes sprouting up around it. There are no security guards, turnstiles or elevators, just a comfy lounge, cool lighting, and whiteboards everywhere. Replicating that vibe in some new tower might be tricky, Dacey said. It likely needs to be located at lobby level, which could cost the developer money, since presumably space taken by District Hall could be leased to a rent-paying tenant.

In reviewing WS Development’s plan for Seaport Square, Boston officials said they will weigh the future of District Hall as carefully as the need for more park space in the quickly filling-in Seaport neighborhood.

“We will be anxious to hear whether or not there is a means of maintaining the function of District Hall while at the same time creating more open space in the Seaport,’’ BPDA director Brian Golden said. “Those two things are important to us, and presumably to a lot of other people. We think it’s incumbent on the developer to figure out these two things.’’

WS Development said it too loves District Hall, but has not said whether it definitively favors making the current building permanent or relocating it. A 2014 amendment to the original Seaport plan envisions keeping it as-is, WS notes. Officials are talking with Venture Cafe, District Hall users, and the city about what solution might work best.

“We’re listening to all perspectives,’’ said WS senior vice president Yanni Tsipis in a statement. “We look forward to engaging in a dialogue with all of the stakeholders.’’

All things being equal, Dacey said, District Hall would love to stay in its current standalone building. But he knows space in the Seaport is precious and, long-term, his site has been spoken for. He expects it’ll take some time to sort out.

“We’re in the first inning of a nine-inning game here,’’ ­Dacey said.

PREVIOUS ARTICLE
Article 108 of 160
NEXT ARTICLE