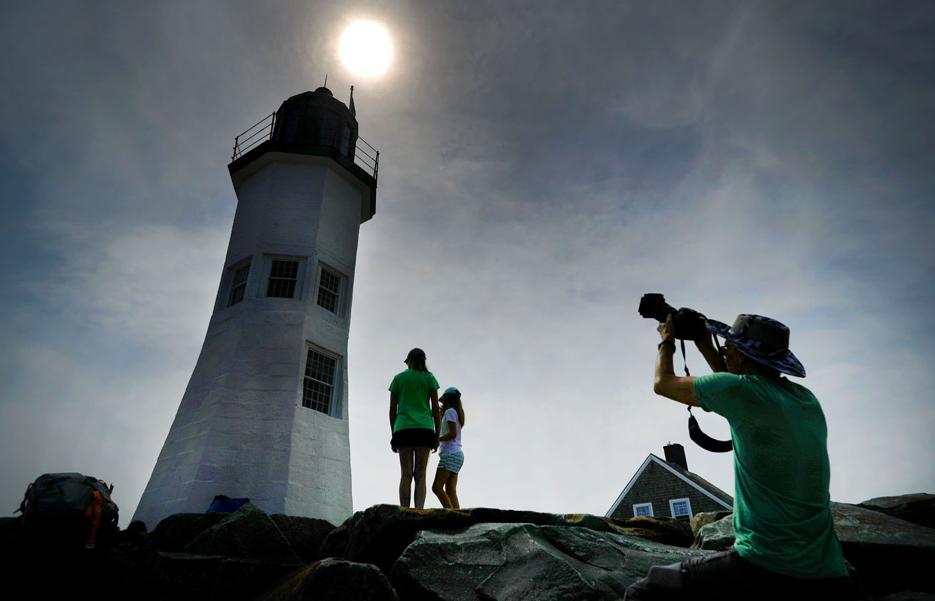 A crowd had gathered at the Boston waterfront near the Children’s Museum Monday for the main event. (Keith Bedford/Globe Staffohn Tlumacki/Globe Staff) 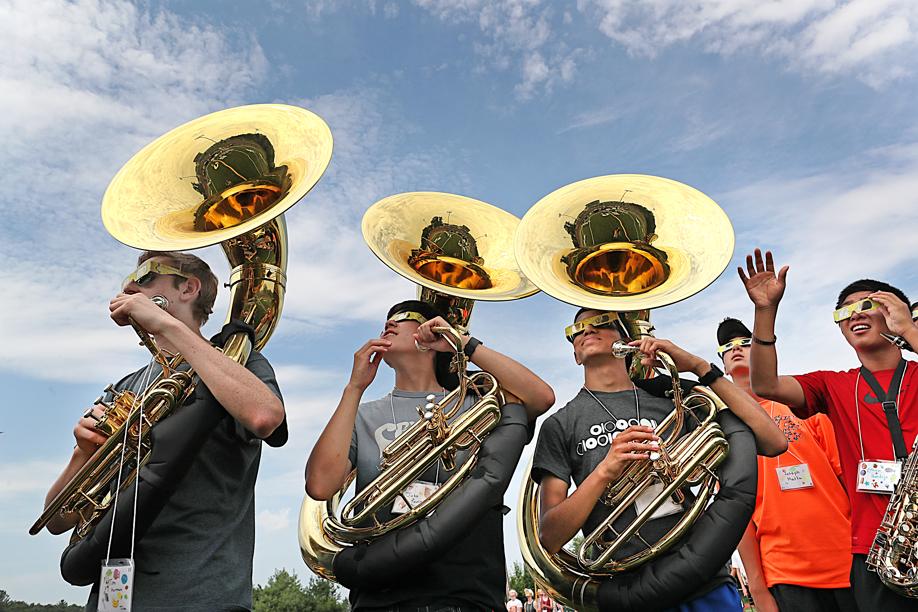 Downtown Boston office workers abandoned their cubicles and spilled onto sidewalks, passing around the hottest commodity in town, cardboard eclipse glasses. At the Blue Hills Meteorological Observatory in Milton, parents and children marveled at the slowly darkening sun or tried their luck with homespun viewing devices: a straw hat or colander strategically held in front of a piece of cardboard. In Cambridge, Joshuah Jest, 27, looked like a character from Star Wars as he donned a welding helmet borrowed from the architecture department at MIT.

Sure, Boston was not in the “path of totality,’’ that 70-mile-wide stretch from Oregon to South Carolina where lucky residents and diehard eclipse watchers got to see the moon completely sweep across the sun, revealing only the luminous outer layer known as the solar corona.

But the city nevertheless paused for a moment of celestial wonderment on Monday, as young and old used cereal boxes, paper plates, and cardboard glasses to witness a partial solar eclipse, as the moon slid across 63 percent of the sun’s surface and bathed the city in a penumbral shadow.

It was a joyful, communal moment of daytime stargazing during a period of deep national divisions, a respite after thousands packed Boston Common on Saturday for a march against racism, anti-Semitism, and bigotry.

From City Hall Plaza to the Blue Hills, there were shouts of “look!’’ and “whoa!’’ as strangers shared eclipse glasses on the street and the entire region seemed simultaneously to turn its attention to the sky.

“Wow! Do you see the moon trying to creep over? Do you see it? Look up! It’s amazing!’’ Chanel Shearer exclaimed to her children, T.J., Trent, and Tatum, all of whom were squinting through eclipse glasses on the boardwalk outside the Boston Children’s Museum.

The family had waited in a long line, hundreds deep, for one of the 100 pairs of dark glasses that the museum made available for public viewing.

“It was amazing. It’s once-in-a-lifetime. It was awe-inspiring,’’ Shearer said after emerging from an eclipse-viewing throng. “It was really like, wow! This is something fantastic.’’

T.J. Shearer, who is 16, forgot about teenager understatement. “Breathtaking,’’ he said. “I thought it was really cool how the moon just takes over the sun.’’

Michele Courton Brown, 55, of Jamaica Plain, couldn’t help but turn a bit philosophical as she gazed toward the heavens.

“This is like science and nature coming alive for us,’’ she said. “It reminds us that we’re part of an orbit. We’re a small speck in this universe, and this is an example of it.’’

In City Hall Plaza, dozens took in the astronomical sight with cardboard glasses, welding glass, or telescopes capped with filters.

“It’s amazingly crystal clear. I didn’t think it would be so obvious. I thought it would be something harder to interpret,’’ said Kate Hickey, co-owner of Applied Geographics, who peered through a telescope brought by a colleague and outfitted with a special filter. “But it’s just — it’s almost like a cartoon drawing. It’s so pure and crisp.’’

Barbara Kaplan, who was also in City Hall Plaza, borrowed a stranger’s glasses, so she could glimpse the view. “It’s a great day, and a great thing to do with a crowd,’’ she said.

MIT estimated that more than 5,000 people came out to use the 300 pairs of eclipse glasses the university made available. The institute also offered two protected telescopes for public viewing — one that detects sunspots and another that picks up sun flares.

“All of these things [sunspots and sun flares] you can see on a normal day, except today there’s a massive chunk taken out of it,’’ said Hosea Siu, a doctoral student who helped set up the telescopes for the event.

The small crowd at Blue Hill Observatory clapped when 2:46 p.m. hit, and the eclipse entered maximum totality for the Boston area.

“It was wonderful. I feel bad for anyone who was stuck inside all day,’’ said Anne Kelly of Marshfield. “It was just a heavenly experience.’’ It was the first time watching a solar eclipse for Kelly and her husband, Charles, but the couple said they “caught the bug.’’

“These kind of experiences don’t come along all that often,’’ Anne Kelly said.

For Jay and Carol Nuss, seated next to the Kellys in the courtyard at the observatory, the viewing was something of a do-over after the Braintree couple traveled to Hawaii in 1992 in hopes of seeing a total eclipse. During that trip, clouds and poor weather blocked the view, Jay Nuss said.

Despite warnings about potential damage to the eyes that could result from looking directly at the eclipse, some merely blocked the sun with one hand while trying to sneak a peek. Others seemed to have missed the memo about how to make a homemade eclipse viewer and stared directly at the sun through small holes poked into pieces of paper.

In City Hall Plaza, Rose Davidson and a group of friends turned their backs to the eclipse and tried to view it by pointing their smartphones toward the sun.

But it wasn’t working very well and Davidson wasn’t impressed by the hoopla. But when she borrowed a pair of eclipse glasses, she quickly changed her tune. “Oh my God, it’s happening!’’ Davidson exclaimed, seeing the moon take a bite out of the sun. “Now I’m psyched.’’

PREVIOUS ARTICLE
Article 5 of 126
NEXT ARTICLE