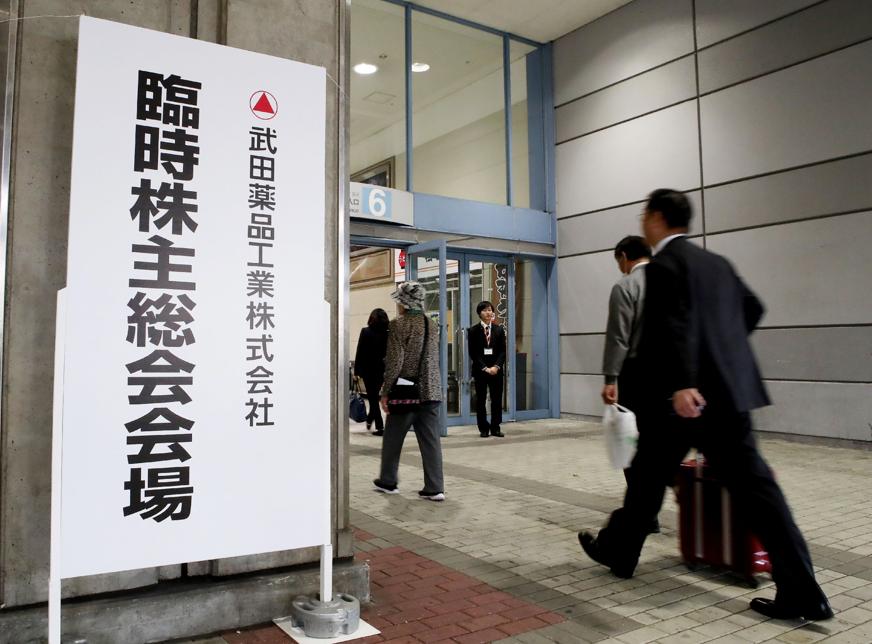 Now the Frenchman has emerged victorious as 88 percent of Takeda shareholders voted in support of the acquisition, virtually ending Weber’s nine-month campaign to secure Shire, whose investors overwhelmingly backed the deal.

Shire is based in Ireland, but most of its operations are in Massachusetts, where it has about 3,000 employees, primarily in Lexington and Cambridge.

Takeda previously took over two other Massachusetts biotechs, Ariad Pharmaceuticals in 2017 for $5.2 billion and Millennium Pharmaceuticals Inc. in 2008 for $8.8 billion. Together, they are part of the company’s oncology unit in Cambridge. Takeda has about 2,000 employees in the state, according to the Massachusetts Biotechnology Council, a trade group.

The Takeda vote represents a clear endorsement of Weber’s vision to transform the 237-year-old company into a top 10 drugmaker with lucrative therapies for rare diseases and a sizable footprint in the United States. The scope of the combination underscores Weber’s ambitions: it’s the biggest acquisition announced globally this year and the largest overseas takeover ever by a Japanese company.

Takeda shares rose 1.1 percent in trading Wednesday in Tokyo. The stock is still down 23 percent since the Japanese company announced its interest in March. Shire rose 3 percent in London. The shares have jumped 53 percent since March 27.

The deal came with a price — Takeda has to shoulder more than $30 billion in additional debt. Weber also faces pressure to ensure the company that began in the 18th century by selling herbal therapies retains its Japanese heritage. Yet the Shire takeover is a key part of his strategy for survival — a way for Takeda to deal with a drying pipeline of late-stage drugs.

The cash flow from the transaction gives Takeda three to five years of added time to build up its own pipeline of experimental drugs, most of which are still in the early stages of development, Fumiyoshi Sakai, an analyst at Credit Suisse Group AG, said in a Nov. 19 interview.

“Takeda is buying time,’’ Sakai said. “In that sense, Shire is the perfect match to fill in the gap. Now, is 7 trillion yen worth five years? That’s yet to be seen.’’

Shareholder approval also bolsters Weber’s own position. He is Takeda’s first foreign CEO and one of the few senior international leaders left in Japan, a country already grappling with the recent ouster of Nissan Motor Co. chairman Carlos Ghosn.

The investor vote is also a rejection of the views of a small group of Takeda shareholders in Japan who publicly campaigned against the Shire deal, arguing that the company would no longer be a Japanese business. The group’s members are primarily concerned with the financial risk of the added debt, as well as the impact on earnings and the company’s dividend.

At least one member of the dissident group seems to have moved beyond his opposition and is now looking to Takeda’s future.

“It would be great if things could go as well as Weber said it will in the long-term and the stock returns to its original level or even higher,’’ Katsuhiko Ogino, 82, a former Takeda employee, said in Osaka. “I do think fundamentally the company needs to internationalize.’’

While Weber has pledged to keep Takeda’s Japanese roots, the globalization push will give it a greater presence in the United States, the world’s largest pharmaceutical market. Its portion of sales from the region will grow to 48 percent of revenue from 34 percent after it completes the purchase.

“The expansion of Takeda’s US footprint is a big part of the rationale for this deal,’’ said Morningstar analyst Karen Andersen. Many of Shire’s products, particularly plasma and rare disease therapies, are sold to hospitals, which could give Takeda more leverage with negotiations for some of its own products, Andersen said in an e-mail.

The benefits of US exposure greatly outweigh any uncertainties tied to pricing pressure in the country, added UBS Group AG analyst Atsushi Seki.

“In the US, innovation will still be rewarded even though price increases are probably difficult in this era,’’ he said. “After this deal, Takeda’s US exposure will be nearly half of revenues — I think that’s the beauty of this deal.’’

When Takeda and Shire arrived at an agreement in May, the $62 billion cash and stock deal was the largest announced globally this year, data compiled by Bloomberg show. The value has since declined with the slumping stock price.

PREVIOUS ARTICLE
Article 58 of 123
NEXT ARTICLE