The cheers fade, but damage lingers
A Globe review finds scores of ex-Patriots who feel or fear the symptoms of CTE
PREVIOUS IMAGE 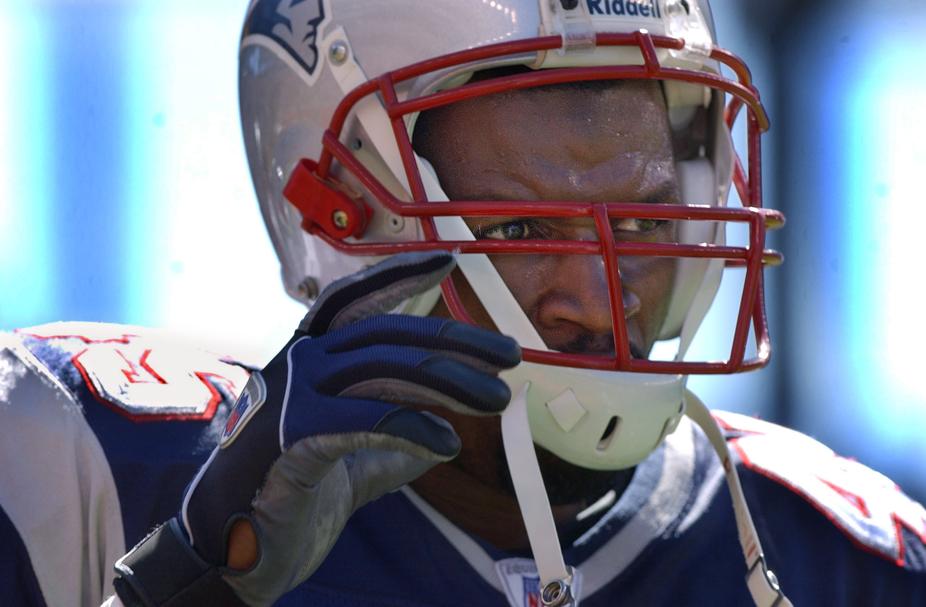 Otis Smith, 52, retired in 2003 and said he is coping with mood swings and other symptoms. (jim davis/globe staff/file 2002)
By Bob Hohler
Globe Staff

Three times between 2002 and 2005, convoys of duck boats carried New England’s Super Bowl champions through cascading confetti and adoring crowds to Boston City Hall during the infancy of the Patriots dynasty.

Of all the men on the boats, only three — 40-year-old Tom Brady, 45-year-old Adam Vinatieri of the Colts, and 37-year-old Ben Watson of the Ravens — remained active last season in the National Football League.

They are the fortunate few. Dozens of their teammates who rode those boats and shared their championship glory are now coping with the consequences of football head injuries, their memories in some cases wilting.

Some 42 of about 100 Patriots who were members of New England’s first three Super Bowl title teams have alleged in a landmark class-action concussion suit against the NFL and the helmet maker Riddell that they have experienced symptoms of brain injuries caused by the repetitive head impacts they absorbed in games and practices.

In all, more than 340 former Patriots or their estates have sued the NFL and its former helmet manufacturer. The Globe, using the team’s official all-time roster, has for the first time compiled and analyzed a list of the Patriots who allege they suffered brain injuries on the job since the franchise was founded in 1960.

NFL teams agreed in 2015 to pay an estimated $1 billion to settle brain-injury claims by nearly 5,000 ex-players who joined the suit, and an unknown number of Patriots are among more than 15,000 former players who have since privately registered for potential benefits under terms of the settlement.

Riddell, which made the NFL’s official helmet from 1989 to 2014, did not join the settlement and continues to contest the suit.

While there is a story behind every NFL player who has filed a complaint alleging brain damage, the numbers alone bring into sharper relief the toll the crisis has taken on elite athletes who once called themselves Patriots.

21 — Patriots in the lawsuit who died before the NFL settlement. Their average age at death was 57.6.

33 — The age of Chad Jackson, the youngest Patriot to sue the league over head blows.

81 — The age of Harry Jacobs, the oldest living Patriot in the lawsuit. He was a member of the franchise’s inaugural team in 1960.

1972 — The earliest a Patriot involved in the lawsuit died. Ross O’Hanley, an original Patriot and former Boston College star, died of a brain tumor at 33 after he displayed CTE symptoms, his wife, Louise, said in an interview.

90 — The number of Patriots who have played since 2000 and say they are coping with the consequences of repetitive head blows in football.

While many of the former players remain functional and some say they filed claims chiefly as insurance against future cognitive problems, there are 37 retired Patriots younger than age 40 who say they have been affected by football head injuries.

Randall Gay, who at 35 has been diagnosed with mild cognitive impairment, considers himself among the fortunate. The youngest Patriot to play in the 2005 Super Bowl — a starting defensive back, he led the team with 11 tackles in a 24-21 victory over the Philadelphia Eagles — Gay retired at age 29 in 2011 after suffering multiple concussions.

He has since graduated from law school with his wife, Desha, and they are practicing attorneys in Louisiana. But Gay’s cognitive deficiencies, he said, include depression and other symptoms he believes were caused by football injuries.

“There are days when I just wake up and don’t want to be around anybody,’’ Gay said. “I just want to be in a room by myself, not doing anything, not even watching TV, and I can’t explain what’s going on.’’

Some 68 former Patriots defensive backs joined the concussion lawsuit. They include Otis Smith, who helped win the franchise’s first Super Bowl in 2002 when he intercepted St. Louis quarterback Kurt Warner and returned the ball 30 yards to set up a field goal in the 20-17 victory.

Smith retired in 2003 after 13 NFL seasons, then helped to coach the Patriots, Eagles, and Chiefs.

Now 52, Smith initially was reluctant to speak publicly about his head injuries because he said he hopes to coach again one day. He later consented and said he is coping with mood swings and other symptoms that he described as common among his former Patriot teammates.

Smith said he may have been harmed by playing in an era before the NFL developed comprehensive concussion protocols. As recently as the early 2000s, Smith said, “If you took a bad hit and got dizzy, they called it a stinger and gave you some smelling salts and you were back on the field again.’’

Several other defensive backs, including Clayborn, Fred Marion, and Lawyer Milloy, are among 60 members of the Patriots’ All-Decade teams who have filed complaints alleging they were damaged by football head blows.

Some 10 former quarterbacks, including Babe Parilli, who died in 2017 at 87, joined the suit, along with six punters and a kicker, Eric Schubert.

Terms of the NFL concussion settlement require former players to undergo two days of neurological and psychological testing to determine their level of possible impairment.

The maximum monetary awards are $5 million for those diagnosed with amyotrophic lateral sclerosis (ALS), $4 million to the estates of those who died with CTE; $3.5 million for Parkinson’s disease or Alzheimer’s; $3 million for moderate dementia; and $1.5 million for early dementia.

The settlement’s court-appointed administrators say that some $284 million has been distributed to about 250 injured players. Many more are waiting for money that might help them but won’t heal them.

Bob Hohler can be reached at robert.hohler@globe.com. Globe correspondent Dan McLoone contributed to this story.

PREVIOUS ARTICLE
Article 21 of 215
NEXT ARTICLE