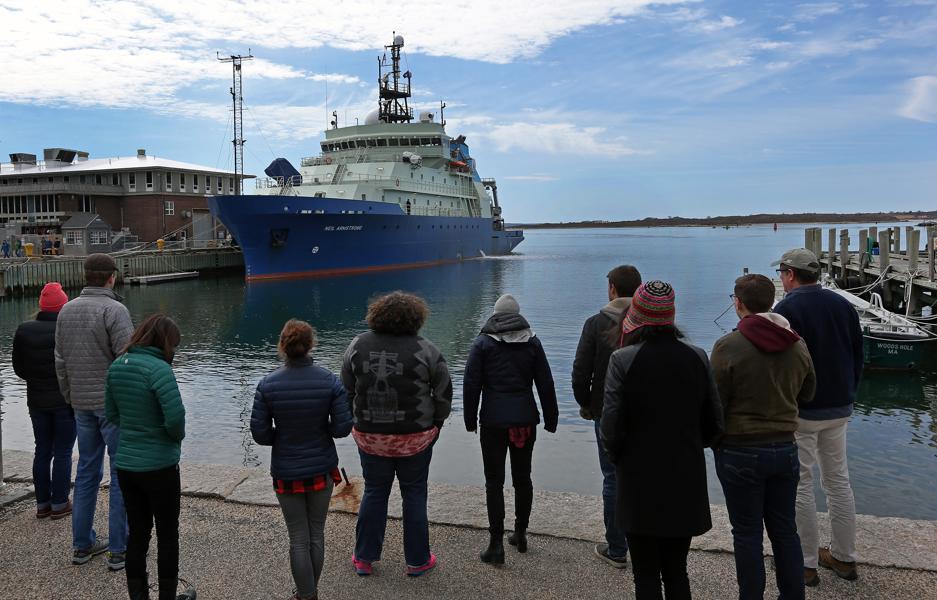 Onlookers viewed the R/V Neil Arm-strong on Wednesday as it docked in Woods Hole, two years after the research vessel Knorr pulled into port for the last time. (David L. Ryan/Globe Staff) 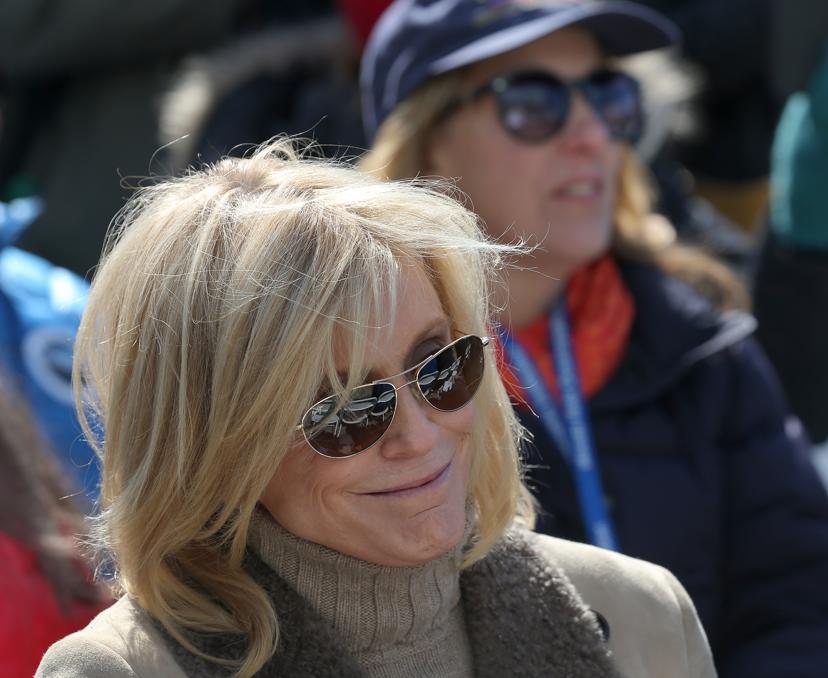 FALMOUTH — Boasting the latest sonar and navigation systems, the R/V Neil Armstrong is designed to explore distant corners of the oceans, studying everything from the tiniest bacteria to deep fissures in the sea floor.

On Wednesday, the research vessel, the newest of seven in the nation’s academic fleet, eased through the calm waters of Vineyard Sound and into its new port on Cape Cod for the first time.

After years of anticipation and construction, the nation’s most advanced research vessel arrived in Woods Hole to begin a new chapter in oceanic research. Named for the first man to walk on the moon, the Armstrong was greeted with fanfare, from celebratory cannon fire to a brass band.

“It’s quite a special day for us,’’ said Rob Munier, vice president of marine operations at the Woods Hole Oceanographic Institution, which will operate the vessel. Munier spent more than a decade helping design the Armstrong, and seeing it finally sail into Woods Hole was a moment of deep pride, he said.

The Armstrong takes over for the R/V Knorr, a legendary vessel that sailed nearly 1.4 million miles over 44 years and was part of some of the 20th century’s greatest ocean discoveries.

Nostalgia for the Knorr, acclaimed for finding the wreckage of the RMS Titanic off Newfoundland and massive tube worms thriving at frigid depths near the Galapagos Islands, ran deep among the cheering crowds that greeted the blue ship, as well as its crew.

“We’re still getting used to it,’’ said Captain Kent Sheasley, who took the helm of the Armstrong after 20 years on the Knorr. “It may take a while.’’

The $100 million ship, built by the Navy, is smaller than the Knorr, can stay at sea for about two weeks less, and carries fewer scientists.

But its technology is far superior to the Knorr’s badly outdated computers and 1960s-era fire control and public announcement systems. The Knorr was retired in 2014 and given to Mexico as a gift last year.

The Armstrong runs on clean diesel engines that are far more fuel-efficient, uses the latest navigation and positioning systems, and emits far less noise than its predecessor. It is outfitted with cranes that can lift heavier objects and is far more comfortable for the scientists and crew on board.

“She’s going to be as good as the Knorr – if not better,’’ said Mark Abbott, president of the Woods Hole Oceanographic Institution. “She really is state of the art.’’

At the ship’s inauguration ceremony, Kali Armstrong, Neil Armstrong’s granddaughter, sang the national anthem, and his widow, Carol, was there to honor her husband.

In an interview, she said it was fitting that the ship would be named for an astronaut, since US space shuttles were named for sailing vessels.

“It’s very emotional,’’ she said. “Neil would love this. He was more Navy than NASA.’’

Armstrong said she was glad that her husband, a naval aviator and test pilot before he became an astronaut, would be remembered for “something other than landing on the moon.’’

Despite the increased use of autonomous vessels, Navy and Woods Hole officials said ships remain vital to research.

Frank Herr, director of the Office of Naval Research’s Ocean Battlespace Sensing Department, said the Armstrong’s value would ultimately be measured in thousands of scientific papers and as a platform to educate generations of graduate students.

Sheasley, the captain, said it would take months or longer for him and the crew to learn the intricacies and kinks of the new ship, which smells as new as it looks.

When they are ready, the Armstrong will carry on the Knorr’s legacy, and the crew hope their work will offer deeper insights into how climate change is affecting the oceans.

As the Falmouth Academy band played swing music, a throng of well-wishers waved signs to welcome the ship and wore stickers, some with the message “R/V: Neil Armstrong: One Giant Leap for the Ocean.’’

Joy and Carl Wirsen, who worked for years at the Oceanographic Institution before retiring, recalled fond memories of the Knorr and spoke of their hopes for the Armstrong.

“We hope this is the start of another great era,’’ she said.

PREVIOUS ARTICLE
Article 58 of 137
NEXT ARTICLE