Seeking the startup vibe
On the lookout for savings and innovation, established companies turn to co-working spaces
PREVIOUS IMAGE 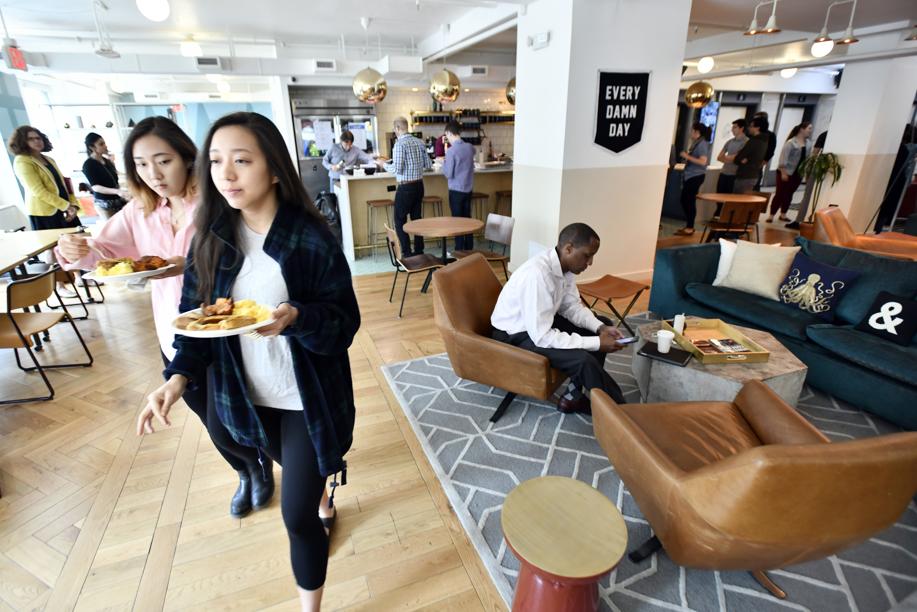 Employees from various firms mingled in the common area at WeWork facilities in the Back Bay. Liberty Mutual has shipped one of its units — Solaria Labs — to the Back Bay WeWork. “Moving out of the corporate office empowered us to think and work differently,’’ said Adam L’Italien, director of innovation for the behemoth insurer. (Josh Reynolds for The Boston GlobeJosh Reynolds for The Boston Globe )
By Tim Logan
Globe Staff

On the sixth floor of a Back Bay office building, past the Art Deco lounge with its bouncy background music and long bar, there’s a row of small, glass-walled offices where developers and data scientists ponder smart-home technology and sensors to make cars safer. Walk down the hall and you’ll pass a small venture capital operation. At the end is a showroom stuffed with drones, virtual reality headsets, and other tech toys.

The floor, one of three in the building run by a company called WeWork, looks and feels like part of Boston’s startup world. And it is. But WeWork also is an outpost for Liberty Mutual, an insurer that started up in 1912.

Three years ago, despite having ample room at its Back Bay headquarters, Liberty Mutual moved its Solaria Labs innovation center to space rented out by WeWork, first near South Station and then into new digs on St. James Avenue. You can see the home office from Solaria Labs’ windows, but the vibe is very different.

“Moving out of the corporate office empowered us to think and work differently,’’ said Adam L’Italien, Liberty Mutual’s director of innovation.

WeWork, which has six locations in Boston and Cambridge, is the biggest player in the booming business of rent-by-the-month co-working spaces. The industry began as a haven for boot-strapped startups and solo entrepreneurs seeking community and flexible office space, but now it’s being embraced by large companies looking for the same things — from Liberty Mutual to General Electric to Amazon, which has hundreds of employees at the Back Bay WeWork. Some midsize firms are bypassing traditional 10-year leases altogether and moving entire operations into co-working spaces.

That’s driving a co-working explosion in Boston. Just since the start of 2017, co-working operators in Greater Boston have leased 1.3 million square feet of office space — about the size of the Prudential Tower — according to real estate data firm CoStar. That has doubled their presence here, and several firms, flush with money from investors, are looking to expand.

The traditional workplace is evolving, with many big companies seeking to cut the amount of space they own or rent long term. Private corner offices are out; collaborative bullpens are in. And employers want amenities designed to attract smart young workers.

To many, co-working space offers all of that. And while the desks often come at a premium price — $600 per month per person is common — relying on companies such as WeWork allows employers to shed distracting, and often-pricey, extras, from coffee to cleaning services.

“These companies are choosing to focus on things they’re great at,’’ said Dave McLaughlin, WeWork’s general manager for the Northeast. “They’re letting us think about the office stuff.’’

WeWork, a privately held company whose value has soared to an estimated $21 billion since it was founded in 2010, is making a big move in the corporate market. It already counts more than 100 Fortune 500 companies among their members nationwide and runs an entire building in New York City for IBM. In Boston, it is reserving large blocks of new offices, including One Beacon Street, for corporate clients.

Smaller competitors, including Boston-based Workbar, are pitching packages that let employees of large companies work remotely — at a Workbar — one or two days a week. National co-working firms such as Industrious and The Yard also are boosting their presence here.

“This is going to keep growing and growing,’’ said Sarah Travers, a co-working industry veteran who was recently hired by Workbar to pursue corporate business. “Mobility is king, and this is how people like to work now.’’

That’s one reason why software company Blackbaud earlier this year moved its Boston office from traditional space in East Cambridge’s Canal Park to a new WeWork near North Station. The South Carolina-based firm is moving most of its satellite offices into co-working spaces, said senior vice president Jon Olson, to make it easier to meet clients around the city and to be around a busy mix of companies.

“There’s a vibe, an energy, that our associates have found to be very positive,’’ Olson said.

Businesses also like the flexibility of a co-working space. Co-working operators offer short-term leases, sometimes month-to-month, and the ability to add or subtract desks as needed, along with extras ranging from free Wi-Fi and reservable conference rooms to beer on tap and networking events.

Bill Peña, chief executive of online insurance brokerage Simply Business, has expanded from two desks two years ago to 73 today, all of them based out of WeWorks around the city. He recently looked at long-term leases in the Financial District and Seaport, but rather than risk being stuck with too much or too little space, he opted for another deal with WeWork.

“We were doing our hiring plan for the next five years, and looking at five and seven and 10-year leases, and we realized we could be off by quite a bit,’’ Peña said. “We don’t want to be crunched for space.’’

But short-term arrangements create financial risks for co-working operators. While their tenants may come and go, co-working businesses themselves are signing 10- or 15-year leases, often on prime office space. WeWork alone is on the hook for $5 billion in lease payments through 2022 nationwide, it recently disclosed to bond investors, and an additional $13 billion further in the future. That could be a problem if the economy sours and companies decide premium co-working rents are a luxury.

Even in a robust business climate, companies can change plans, leaving a sizable hole for co-working operators to fill. For instance, GE rents 50 desks for Current at the South Station WeWork, but last fall the company said it plans to sell the operation as part of broader cost-cutting. A new owner could move operations elsewhere. A GE spokesman declined to comment on plans for Current.

Amazon says it hasn’t yet decided whether it will stay at the Back Bay WeWork as it opens big permanent offices in Fort Point and the Seaport.

And, increasingly, co-working companies are competing for tenants with their own landlords, who rely on some of these same larger companies to fill their office buildings.

So far, major office landlords in Boston have been willing to rent to co-working firms, but they don’t want to lose tenants to the upstarts. To keep that from happening, many have been investing heavily in the kind of hip hangout spaces and move-in-ready offices that are key to co-working’s appeal. If they also start to offer more flexible lease terms, that could dent demand for co-working, said Peter Conway, a market analyst at CoStar.

“The co-working industry could suffer if big landlords began allowing tenants to do short-term leases,’’ he said.

But WeWork and other companies in the co-working industry appear confident that the demand for their less traditional approach to the workplace isn’t about to wane. Indeed, WeWork, which will open two more locations by the end of the year — bringing its Boston desk count to 8,000 — is on the lookout for more space, real estate brokers say.

“Our intention is to keep investing,’’ WeWork’s McLaughlin said. “We feel like we’re just getting started.’’

PREVIOUS ARTICLE
Article 6 of 148
NEXT ARTICLE