CAN STAPLES GO FROM THIS TO THAT?
PREVIOUS IMAGE 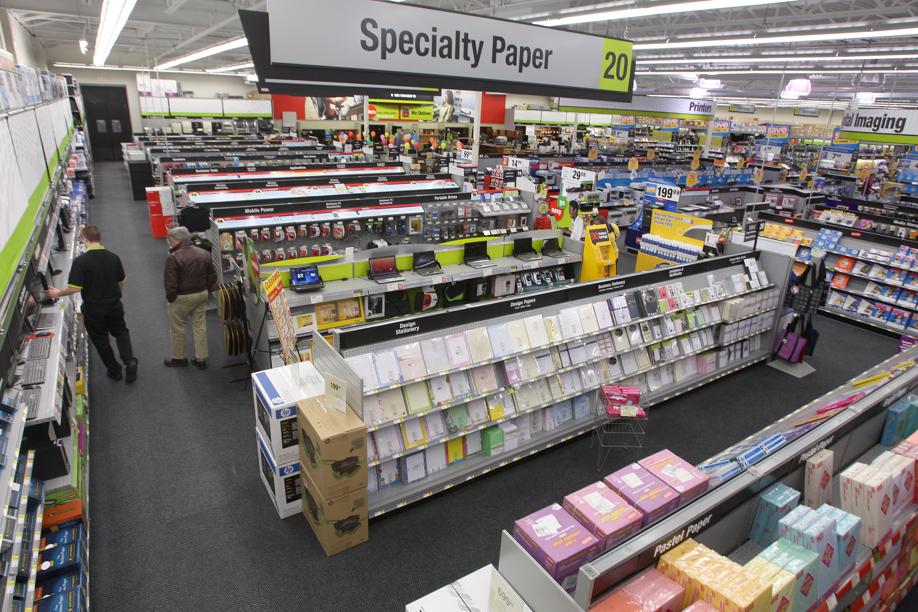 Staples, the biggest office supply chain, is looking for ways to broaden its base and fend off Internet-era rivals like Amazon. (Essdras M Suarez/Globe staff/File 2009) 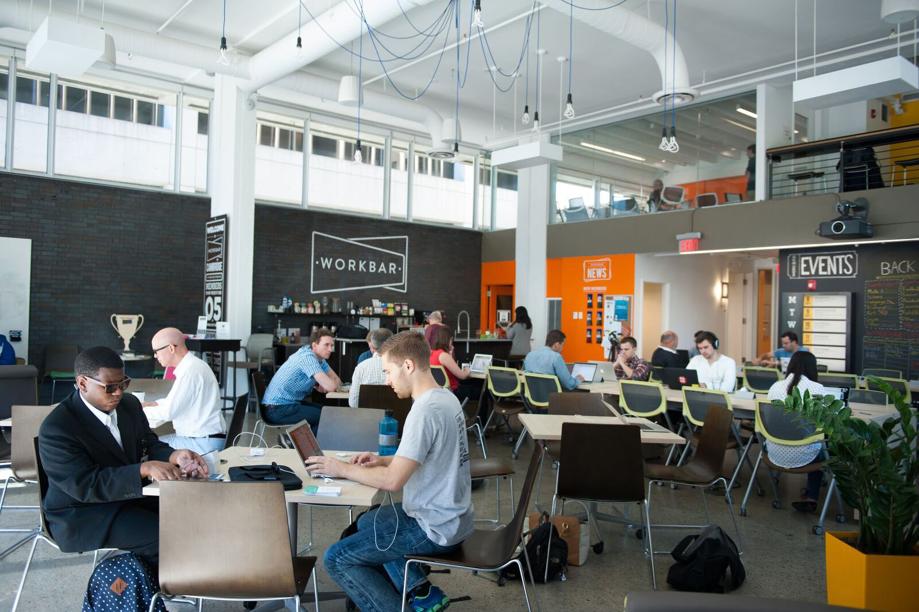 Workbar, a co-working upstart that serves a new class of workers not tethered to traditional offices, will soon appear in three Staples stores. (Workbar/Cambridge ) 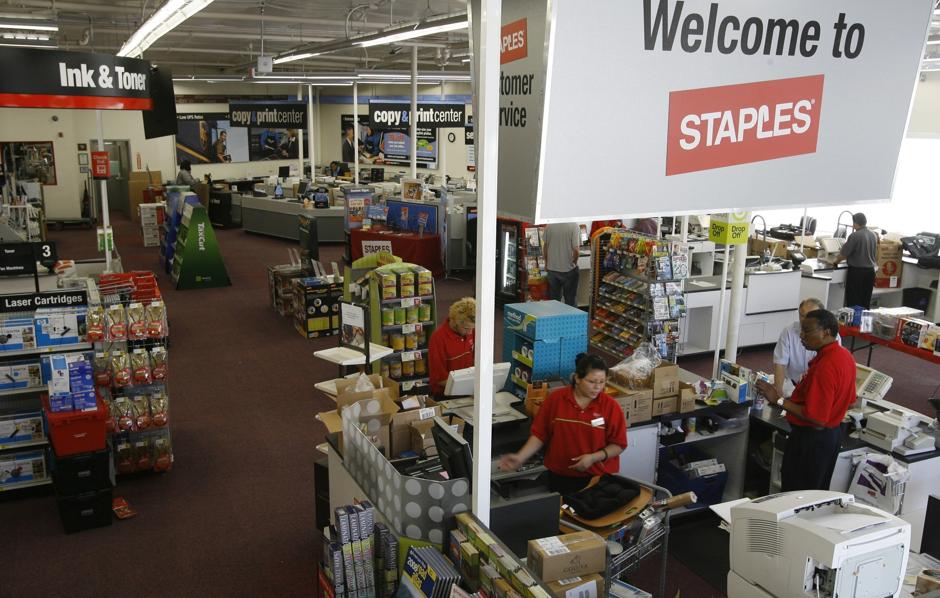 You used to go Staples for office supplies. Now you can just call it your office.

On Monday, the megastore that has long specialized in paper and printer ink is set to announce a partnership with Workbar Inc., the Boston shared-workspace company. The relationship will establish co-working spaces inside three Staples Inc. stores, in Norwood, Brighton, and Danvers, where members can rent desks on a daily or monthly basis. Just past the highlighters and to the left of the shredders, the companies plan to build walled-off enclaves with all the trappings of a typical startup: colorful conference rooms, shared kitchens, private call booths, and flexible desk space.

And presumably all the Post-it notes you could ever ask for.

It’s an intriguing move for both businesses.

One is an established-yet-embattled player in the throes of an antitrust lawsuit with the Federal Trade Commission over its $6.3 billion deal to buy its next biggest competitor, Office Depot. In merging, Staples hopes to fend off Internet interlopers like Amazon.com Inc. that have made a push to acquire their valuable corporate accounts.

The other is a seven-year-old upstart that is serving a new class of workers who are no longer tethered to the office environments of yore.

Workbar has three “hub’’ locations — in downtown Boston, Cambridge, and Somerville — and partnerships with more than a dozen privately operated co-working locations in New England. By moving into Staples spaces, Workbar will get access to valuable real estate and a population of workers who are based in more suburban locales.

Bill Jacobson, Workbar’s chief executive, said that when Staples first approached him about the partnership, he immediately saw it as a way to respond to the needs of his 1,500 members. Many commute from the surrounding suburbs to their hub locations, he said, and have been using coffee shops and shopping mall food courts to meet with their team members because they don’t have co-working sites closer to their homes.

“It’s always come to our mind that there needs to be something that is both urban and suburban,’’ he said. “Not all innovative or entrepreneurial minded people live in the city.’’

Peter Scala, Staples’ executive vice president of merchandising, said the company has been closely following the popularity of co-working. A survey released in January by Desk magazine, a publication dedicated to the industry, identified over 10,000 co-working spaces operating internationally. And that number is poised to continue growing: Sixty-two of the respondents said they had plans to add desks or expand locations in the coming year.

“Mobile professionals are a growing sector of the workforce, and the Workbar locations at Staples will be a great complement to the existing suite of business services that we have in stores,’’ Scala said. “It helps us to drive traffic, to engage a younger, new type of customer, and it aligns the way workers are working today.’’

The planned spaces within Staples stores will be between 2,500 and 3,500 square feet and will be situated at the rear of the retail stores, behind glass-walled partitions that delineate them from the aisles of supplies. Each space will accommodate 45 to 50 people and will be staffed by a Workbar employee who will oversee scheduling and administration.

Members will pay a subscription fee to access the workspace — typically a few hundred dollars a month — and be given premier status for the Staples rewards program, which equates to big savings on printing, shipping, and other expenses that can add up fast for small businesses.

The companies plan to open these pilot locations by June.

For Staples, the partnership creates a new revenue stream for the chain, which has seen its sales drop 6 percent over the past year. Staples has closed 300 stores since 2013, and it shed 1,000 jobs early this year, including several hundred at its Framingham headquarters.

In its legal battle with the Federal Trade Commission, Staples is arguing that consolidating with Office Depot would not create a monopoly because Amazon has aggressively attempted to cut into its business and gain corporate accounts.

“It’s an interesting model,’’ said Pete Bacevice, a senior associate at the global architecture and design firm HLW and a researcher studying co-working with the University of Michigan’s Ross School of Business.

Because competition from Amazon has cut down on the foot traffic into brick-and-mortar stores, Bacevice said, “it makes sense, in a way, for Staples to essentially activate their real estate.’’

For Workbar, the move serves as an extension of its business model, which in addition to managing its hubs, is increasingly focused on providing business software to independently run co-working spaces, said Jacobson. Partners that sign up to use Workbar’s cloud-based management system to coordinate meetings and keep track of members gain access to Workbar’s online job and message boards.

It’s also a way for Workbar to gain inroads into a preexisting national network of retail stores, most of which are easily accessible by major highways and have ample parking.

Both Scala and Jacobson said they are excited about the potential for the partnership to expand beyond the three pilot locations.

“We don’t enter into relationships lightly,’’ said Scala, who emphasized the possibility that the co-habitation concept could easily be replicated via Staples’ national footprint. “We think we found a partner that can last a long time and we hope to grow with them.’’

Of course, the challenge remains: Will the two companies find ways to weave together two distinctly different corporate cultures? Will the Staples staffers in red polo shirts feel comfortable mingling alongside Workbar’s millennials in hoodies?

It’s hard to imagine the team from the Dunder Mifflin paper company in the NBC sitcom the “The Office’’ and developers from HBO’s “Silicon Valley’’ sharing a communal space.

“You do have to walk through a Staples to get there,’’ Jacobson said. “But retail is changing, and this is part of the change. The cool factor comes from the people and the attitude and the members as much as anything else.’’

PREVIOUS ARTICLE
Article 53 of 94
NEXT ARTICLE