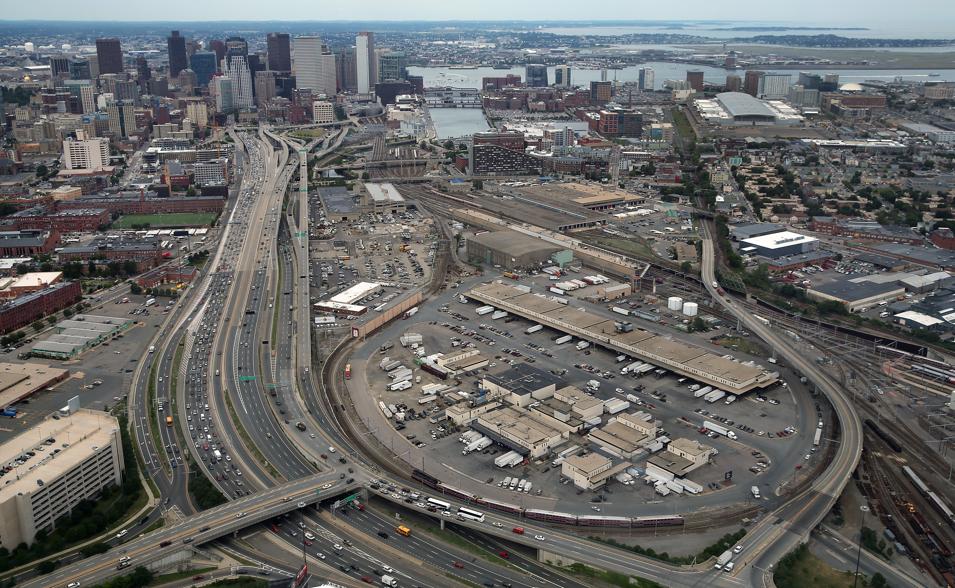 A sprawling industrial site near downtown Boston may soon be marked for a new cosmopolitan neighborhood after its owners of nearly 50 years took a major step toward freeing up the property for redevelopment.

Home to a collection of food wholesalers, the Widett Circle area, between the South End and South Boston, had been primed as a potential site for the Olympics before Boston’s bid failed. Now, with the area around them undergoing rapid redevelopment, the wholesalers are moving toward putting their 19-acre property in play and bidding for a new home in South Boston.

“Collectively, they all agree there’s probably a long-term better use for Widett Circle than what is there today,’’ said developer John Hynes, who has teamed up with the wholesalers — the New Boston Food Market cooperative — to bid for a parcel in the city’s marine industrial park in South Boston. “What the Olympic committee designed for Widett Circle kind of woke everybody up to the fact this is a pretty good location.’’

Widett Circle is within sight of downtown and along the Red Line between two MBTA stations.

But a tide of urban renewal is washing across this side of Boston, with the neighborhoods abutting Widett being remade with large-scale residential complexes.

The latest triggering event for the wholesalers’ move out of Widett Circle is a mini land rush of sorts on the South Boston Waterfront, where two public agencies are selecting businesses to build on some of the last remaining developable land in the Raymond L. Flynn Marine Park. Hynes’s company, Boston Global Investors, and the New Boston Food Market cooperative have submitted a bid to the Boston Planning & Development Agency for 3.4 acres on Dolphin Way, at the tip of the peninsula.

“It’s an opportunity to get our foot in the door and to show some interest,’’ said Marion Kaiser, chief executive of the seafood company Aquanor Marketing and a member of New Boston Food Market’s board. “It may be the right time [to leave]. Like anybody that’s good in business, we explore all opportunities and see what makes sense.’’

But the city-owned property is too small to accommodate more than a few of the 18 food wholesalers at Widett. So they are also eyeing a piece of a neighboring property that is mostly empty and controlled by the Massachusetts Port Authority. Massport has found uses for most of the site, but still has more than 10 acres that have not been designated for development.

Hynes said he and the wholesalers are hopeful that if they win the run-off for the city property, they would be in a position to persuade the agency to open some of that land for the remaining food companies.

Massport’s chief executive, Thomas Glynn, said the authority is currently working only with the 10 companies that participated in an earlier bidding process for the Massport land.

Widett Circle has been a home to wholesalers for nearly 50 years, since the redevelopment of Quincy Market forced many food companies to relocate. The New Boston Food Market owns most of Widett Circle, and proceeds from the sale of their valuable property would help to pay for a more modern facility elsewhere.

“There’s been a lot of attention to this parcel ever since the discussion about the Olympics,’’ Kaiser said. “As a result, there’s been various people, developers, that have looked at it and talked to us.’’

To be sure, a lot has to happen for Widett to become the next big construction site. Hynes’s proposal is one of three bids submitted for the city property on the waterfront. And if Hynes does win, he may still need to find more land to accommodate the rest of the Widett wholesalers.

The New Boston Food Market businesses, which collectively employ about 900 people, would, ideally, want to stay together. Hynes said the wholesalers’ next steps could play out in several ways: They could move as a group, to the waterfront, or to somewhere outside of Boston. They could also split up, or stay together at Widett.

The Massport property is restricted by the state to maritime industrial activities, which may preclude some of the food wholesalers. However, the Boston Planning & Development Agency is reviewing proposed rules that would allow for more nonmaritime uses in the area, which could make it easier for the Widett Circle businesses to relocate there.

Any changes, she said, should balance the need of industrial users with the potential for a mixed-used, transit-oriented development that could knit together South Boston and the South End.

Any big changes at Widett, she said, would be set in motion only if the New Boston Food Market wholesalers decide to leave.

Rezoning would then take place, with ample opportunity for public input, to allow new uses there, such as for retail or housing.

JP Plunkett, principal of the Red Dome commercial real estate brokerage, said the food wholesalers would probably be enticed to move only “if they get a big bag of money’’ for Widett. If that happens, he said, it’s unlikely the next occupants would be industrial.

“More office, more retail, more hotel [space],’’ Plunkett said. “It’s a trend that’s not going to reverse, but it’s not necessarily always a good thing. This city needs a strong industrial real estate base to be an international-class city.’’

PREVIOUS ARTICLE
Article 4 of 130
NEXT ARTICLE