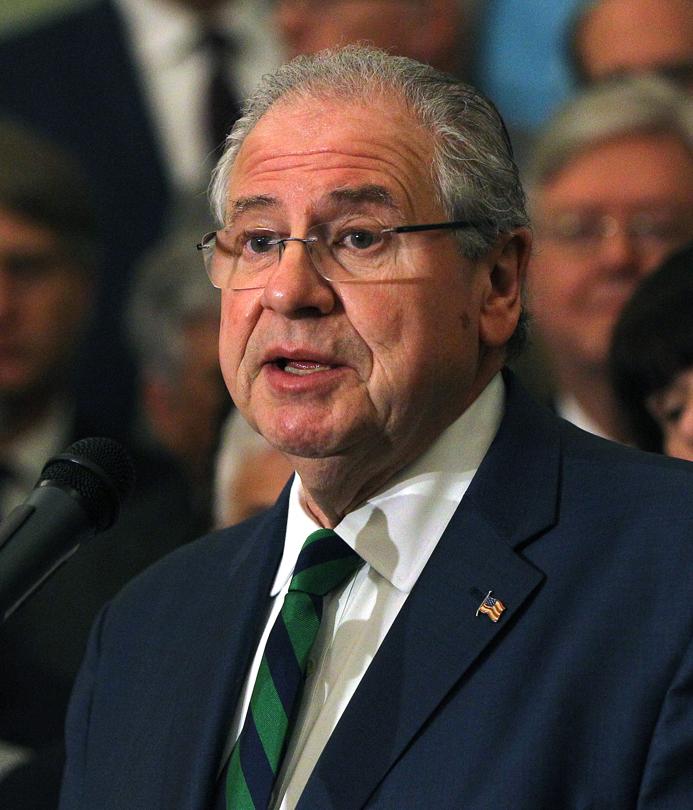 Addressing concerns from the business community, House leaders have made two major last-minute changes to a bill that would significantly restrict noncompete agreements in Massachusetts.

The latest version, which heads to the House floor on Wednesday for a vote, aims to soothe a sore spot among some employer groups: a proposed new requirement known as “garden leave’’ that would force companies to pay people after they leave, for the duration of their noncompete agreements.

The previous bill, released last month, would limit noncompetes to one year in length and require employers to pay 50 percent of a worker’s salary for the duration.

The new bill has a second option: Employers could instead choose to be on the hook for an unspecified “mutually agreed-upon consideration.’’

The change follows a meeting a week ago between House Speaker Robert DeLeo and representatives of prominent big-business groups.

The other big change to the legislation would maintain the status quo for how judges handle noncompete disputes. The earlier bill would have essentially limited judges to making up-or-down votes on noncompete agreements when ruling on these disputes, while the latest version ensures that judges retain the discretion to alter provisions in a disputed noncompete.

Venture capitalist Jeff Bussgang, one of the area’s most vocal critics of noncompete agreements, said the newest garden-leave language could be problematic, but he said he’s still happy to see major reforms moving forward.

Bussgang said California, where noncompetes are essentially illegal, would still be more friendly to startups than Massachusetts in this regard. But Massachusetts, he said, would take a strong leadership position if this bill becomes law, in comparison to most other states.

“It’s still substantial progress,’’ said Bussgang, general partner at Flybridge Capital Partners in Boston. “Of course, I’d like more. [But] I respect the fact that the speaker is trying to negotiate fairly with all the parties. . . . If we do this, it’s a meaningful step forward.’’

The issue of noncompetes has been the source of recurring debate over the years on Beacon Hill, and has often pitted champions for the startup community who dislike noncompetes against advocates for large, well-established employers. Momentum for reform picked up when DeLeo in March made it clear that he would like to put common-sense restrictions in place, in part to avoid unfair impositions on low-paid workers such as camp counselors.

The new bill would prevent noncompetes from being applied to laid-off employees or to a wide range of hourly workers earning up to a certain pay level. It also includes a notification provision to prompt employers to highlight any noncompete requirements before hiring someone.

Bussgang said he is concerned that some employers may use the new garden-leave provision as a loophole, by just agreeing to minimal levels of pay during a noncompete period. “I think some clarifying work needs to be done there,’’ he said.

Bussgang said he hopes Senate leaders will address the issue when they take up the bill. If the Senate approves a version that is substantially different from the House’s bill, both sides would need to hammer out a compromise before lawmakers adjourn from formal sessions on July 31.

Representative John Scibak, the House cochairman of the Legislature’s labor committee, said the garden-leave change showed an effort to give employers — and, potentially, prospective employees — more flexibility. For example, this provision would allow employers to reimburse recruits with stock options during a noncompete period.

“I would rather see something that works for both sides than keep the status quo or put either side at a [big] disadvantage,’’ Scibak said.

“Our initial review is that it’s better than what we were working with,’’ said Jim Rooney, CEO of the Greater Boston Chamber of Commerce. “It’s better than having a mandated garden leave. That provision was difficult because it was one-size-fits-all.’’

Chris Geehern, executive vice president at Associated Industries of Massachusetts, said it’s important to preserve a judge’s right to alter noncompete agreements, as well, even though judges often rule in favor of employees in these cases.

“If a noncompete agreement goes into litigation, a judge can change certain parts of the agreement but doesn’t have to throw out the entire agreement,’’ Geehern said.

Jon Chesto can be reached at jon.chesto@globe.com.

PREVIOUS ARTICLE
Article 73 of 122
NEXT ARTICLE