A look into Alzheimer’s future in US
N. Dakota on leading edge
PREVIOUS IMAGE 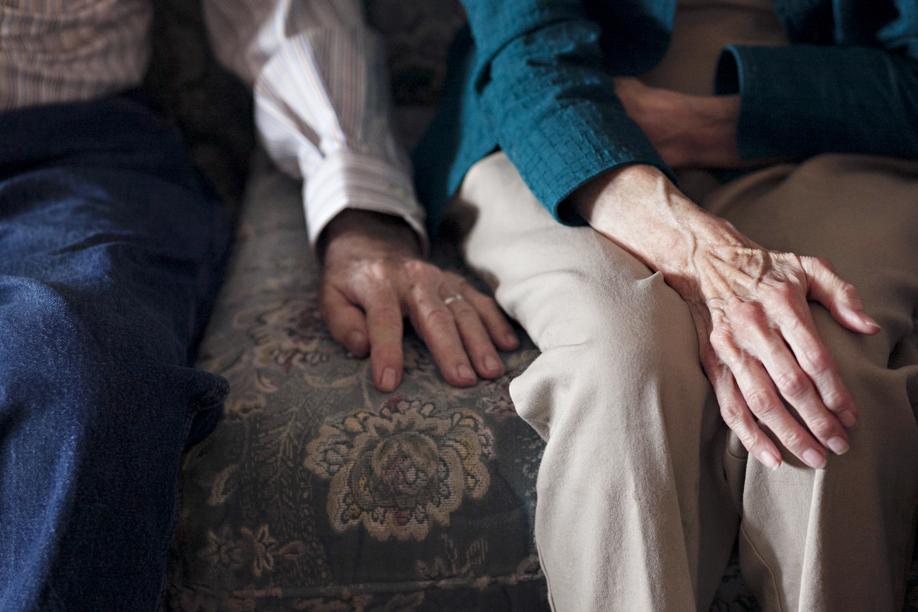 Alan Ormiston stayed close to his wife, Jo, at the couple’s rural home near Nekoma, N.D., this month. Alan has turned to his local Alzheimer’s Association to help guide him in caring for his wife. (Photos by Ann Arbor Miller for STAT) 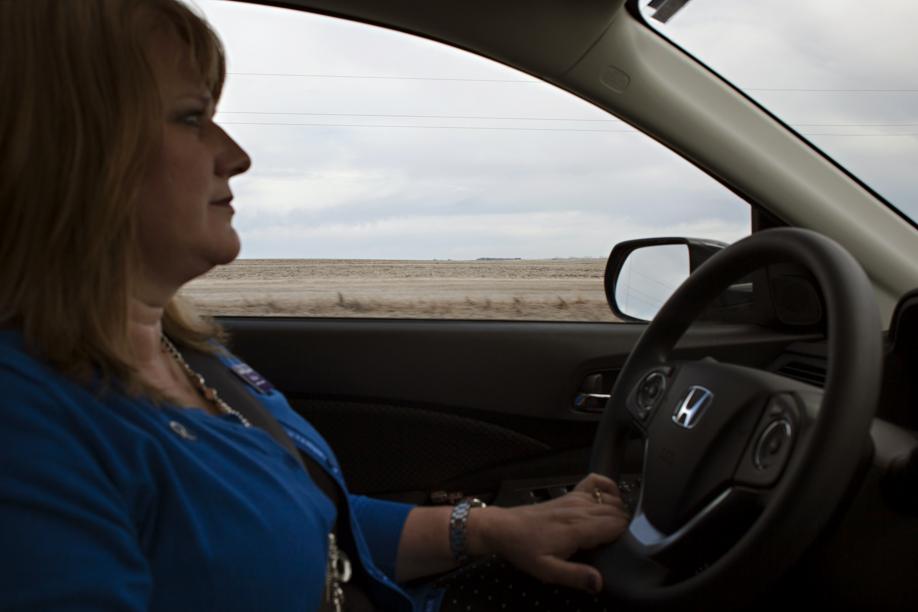 Beth Olson helps families in North Dakota, which has been hard-hit by the disease. 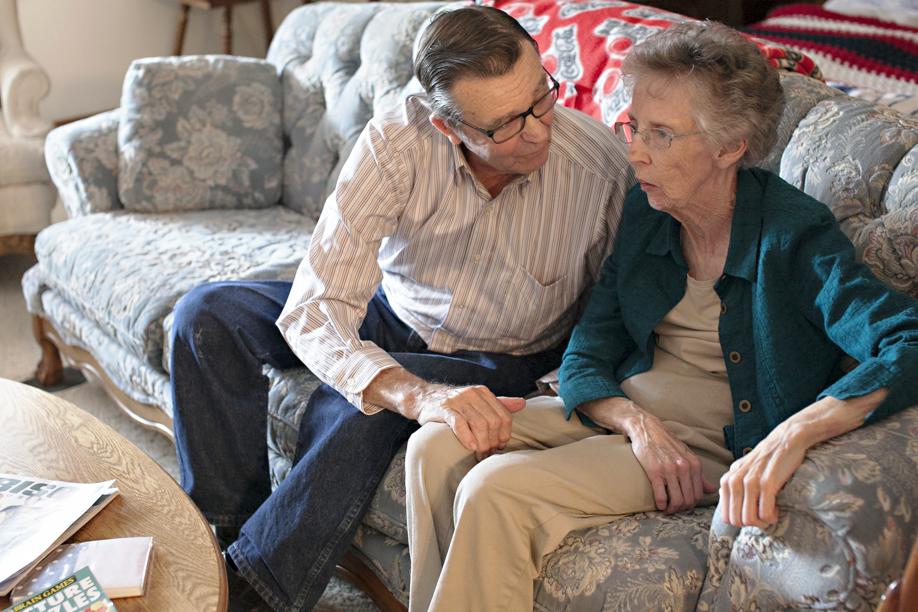 The Ormistons are among the many families who have been helped by the state’s program. (Ann Arbor Miller for the boston globe)
By Grace Rubenstein
STAT

North Dakota’s sparse landscape has long made it a natural frontier: Pioneers here pushed the boundaries of westward expansion, then agriculture, and recently domestic oil drilling. Now the state finds itself on the leading edge of a new boom that it never would have chosen: Alzheimer’s disease.

Cases are climbing across the United States, and especially in North Dakota, which has the country’s second-highest death rate from the disease. While Alzheimer’s is the sixth-leading cause of death nationally, it already ranks third here.

“Everybody knows somebody’’ affected by the disease, said Kendra Binger, a program manager with the Alzheimer’s Association Minnesota-North Dakota chapter. As public awareness rises along with the numbers of cases, “it’s hard to ignore anymore.’’

This makes the state an ideal laboratory to glimpse at the future of Alzheimer’s in America and to identify strategies that could help the rest of the country cope. The devastating disease has strained families and the state budget. So North Dakota — a place that prides itself on personal independence and financial parsimony — has found new ways to support its residents and a new consensus to spend money on prevention.

The state’s primary strategy is to assist family caregivers — the estimated 30,000 North Dakota spouses, siblings, sons, and daughters looking after loved ones with dementia. A half-dozen consultants roam the state to evaluate families’ needs, train caregivers, connect them to services, and offer advice. Studies show the program has helped families keep their loved ones out of nursing homes and has saved the state money.

“We are not well prepared, to put it mildly,’’ to respond to the growing Alzheimer’s crisis across the country, said Marc Cohen, clinical professor of gerontology and director of the Center for Long-Term Services and Supports at the University of Massachusetts Boston. Since the burden of caring for dementia patients falls heavily on family members, he added, strategies like North Dakota’s are “exactly what is needed.’’

Betty Mahlke, a retired bookkeeper, discovered the impact of North Dakota’s approach two years ago, when her husband, Larry, started forgetting everyday details — a troubling symptom of the Alzheimer’s diagnosis he’d received years before. It’s lonely enough caring for a loved one with dementia in the heart of a city, surrounded by service organizations and care options. But like Betty, many of North Dakota’s growing ranks of family caregivers are doing it in far lonelier places: on isolated farms or in small towns across 350 miles of the Great Plains.

The Mahlkes lived in ­Jamestown, a city of 15,000 halfway between Fargo and Bismarck, a hundred miles from each. Jamestown is hardly the state’s most remote community; it is home to the National Buffalo Museum, a stock car racetrack, and high school football games that Larry Mahlke loved to watch. But it has limited support services compared with a big city. So when a visiting consultant, Beth Olson, came to give a presentation on dementia at the local senior center in March 2015, Betty seized the chance.

“Every little hint’’ about how to care for Larry resonated, Betty recalled. “I was just grasping for anything that could help.’’

Soon after, Olson visited the Mahlkes at home, and this began a relationship that would carry Betty through the deepening challenges to come. At first, Olson suggested puzzles and games that could help Larry, a retired furnace installer and insurance salesman, keep his mind active. When he later stopped recognizing his own home, she coached Betty on the best response. Instead of arguing, Betty would invite him into the car, drive a few blocks, drive back, and say they were home. Sometimes the gambit worked, Betty said. “Other times he’d say, ‘This is not my house,’ and we’d have to drive around some more.’’

Olson’s personalized support of the Mahlkes is North Dakota’s model for easing the burden of Alzheimer’s and other forms of dementia. Olson is a care consultant with the state’s Dementia Care Services Program, established in 2009. Republican state Senator Dick Dever proposed the program after discovering personally the difficulty of caring for a family member with Alzheimer’s. The state Legislature approved it with overwhelming support in both houses. Michigan is now piloting a similar program in three counties and working to expand it statewide.

What makes North Dakota such an Alzheimer’s hot spot? Like much of the rest of the Midwest, it’s graying. Rural counties are emptying out as young people depart for better job prospects elsewhere, leaving an earlier, aging generation behind. This is a familiar story for Betty Mahlke, whose four grown sons all settled out of state (in Minnesota, Nevada, and Idaho) for the sake of work.

The state has a high ratio of elderly residents. Especially large is the group called the “oldest old,’’ those 85 and over, who are dramatically more likely to die from Alzheimer’s than the group ages 65 and over. In the latest US Census, only Rhode Island had a larger portion of its populace in the “oldest old’’ range.

That explanation doesn’t satisfy Dr. Donald Jurivich, chair of geriatrics at the University of North Dakota School of Medicine and Health Sciences, who believes there’s more at play than demographics.

Jurivich and his colleagues have speculated on a host of possible causes, none yet proven: Perhaps North Dakota’s high Alzheimer’s death rates could be explained by radon exposure, a meat-heavy diet, genetic predispositions among the northern Europeans who settled in this part of the Midwest, or simply state-by-state differences in record-keeping. He’s applying for grants to fund further study to solve the mystery.

The Dementia Care Services Program, meanwhile, has to cope with the realities on the ground. The program, run by the regional Alzheimer’s Association, substantially expanded the shoestring work that the association was doing before 2009. Previously, two consultants had covered the entire state, counseling families one-on-one (including Dever’s family) and raising their own funds. They couldn’t range far beyond Fargo and Bismarck, the two largest cities.

Now, six care consultants do the job, dividing the state into eight zones. As Olson did with the Mahlkes, the consultants assess patients’ needs, teach caregivers what to expect and how to respond, refer them to services, lead support groups, and answer questions by phone and in person. Importantly, they often visit patients’ homes, even those in the remotest corners of the state. Between January 2015 and this February, nearly three-quarters of the 2,602 consultations were done in person.

The main purpose of the program, which costs the state $600,000 a year, is to help families keep loved ones with dementia at home, rather than in a nursing facility, for longer. With average nursing home costs running over $8,000 a month per patient, and the state’s share of Medicaid paying half the price, even a few weeks’ delay can make a dent. For families, having the knowledge and support to keep a loved one at home can also make a big emotional impact, relieving the bewilderment and forestalling the burnout that often afflicts caregivers and preventing costly, avoidable medical care for patients and caregivers alike.

That’s what it did for Betty Mahlke. Though the caregiving exhausted her, she couldn’t stomach the idea of moving her husband into a care facility. When Larry eventually couldn’t recognize even her, Olson had already prepared her for how to respond.

“We’d be sitting in the living room and he would look at me strangely, and you could see that fear in his eyes, that this lady is not anybody he knows,’’ Betty recalled. “There were times when we’d go to bed at night and he’d lay on the edge of the bed, stiff as a board.’’ When Larry said, “Where’s Betty?’’ she knew to reassure him: “I’ll go try and find her.’’ Then she’d leave the room, change her shirt, and come back in.

A formal evaluation of the program backed up stories like Betty’s with statistics.

The study, conducted at the University of North Dakota Center for Rural Health, looked at the first 3½ years of the program. Caregivers reported that it helped them feel more empowered, less likely to need emergency room visits and hospitalizations for their loved ones, and less likely to place their loved ones in long-term care. The researchers estimated the resulting cost savings at $800,000 for medical and hospital services avoided and $39 million for long-term care.

PREVIOUS ARTICLE
Article 5 of 130
NEXT ARTICLE