In a Kentucky field, something for everyone
PREVIOUS IMAGE 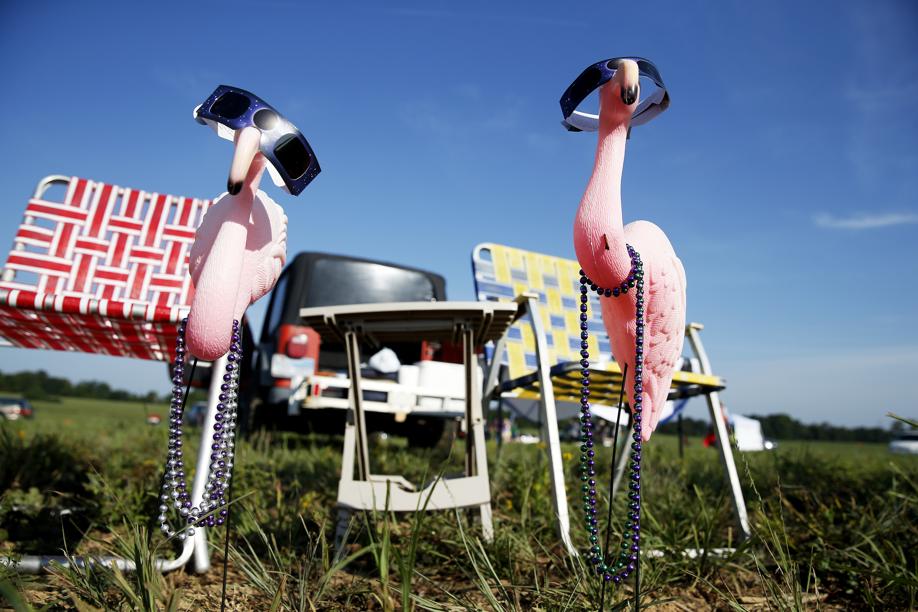 HOPKINSVILLE, Ky. — When the moment of celestial perfection was finally here, and the last sliver of sun slipped behind the moon, a series of cheers echoed across this rutted, weedy patch of sloping farmland.

It was 1:24 p.m. Central Daylight Time, and the temperature had suddenly dropped 10 degrees. Frank Ludwig had his arm around his wife, Mary, as they leaned up against their Chevy Suburban. For their 30th wedding anniversary, they got their old rings resized and drove all the way from southeastern Minnesota so they could stare, together, at the sky. They’d piled the old SUV with kids and gear and adorned it with drawings and Scripture and facts about the eclipse.

Monday’s total solar eclipse swept across the country, cloaking cities and towns in the so-called Path of Totality from the Oregon coast to South Carolina in a few moments of breathtaking midday darkness. And Eclipseville, as this little city an hour northwest of Nashville has taken to calling itself, is at its astronomical center — the point at which the Earth and the axis of the moon’s shadow most closely align.

Thousands flocked here, amateur astronomers and magnificent weirdos, lovers and lovable nerds hauling chairs and tents and banners and drones and dogs and snakes. They set up camp at soccer fields and watched from festivals both spiritual and silly. They unfurled telescopes as big around as fire hydrants or unfolded cheap paper glasses that have disappeared from stores all over the country in recent weeks.

But as figurative moments in the sun go, Eclipseville’s 2 minutes and 40 seconds wasn’t much time. Frank leaned over and gave Mary a kiss.

The light was gone then, but for a vague dusk-like notion on the lush, green Kentucky horizon. And everyone stripped off their glasses. High in the sky, the sun’s corona shone white from behind the blackened moon. The whooping and hollering, Godly praising, and amazed cursing died down. The whir of generators was somehow more resonant. The cows that had spent the morning inserting themselves into everyone’s conversations had gone quiet. Softly, crickets began to chirp.

There were only a few handfuls of seconds left and they were slipping away. People fiddled with their cameras or tried to take pictures with their phones.

This region has been ready for this eclipse for years now, and the run-up in recent days has been considerable. On Monday morning, Kentucky’s governor arrived on the farm by helicopter in the morning, and someone from the United States Postal Service came to unveil a new total eclipse stamp (it glows in the dark).

Up the road, a local ministry staged a Christian music festival called SolQuest, where thousands camped out.

In nearby Kelly, considerably fewer people turned up for the annual Little Green Men Days Festival; local lore has it that aliens touched down there on Aug. 21, 1955. Could a total solar eclipse centered just a few miles away on the very same day really be some kind of celestial coincidence? (Hint: Yes.)

Casey Jones, a local distillery, offered tethered hot air balloon rides and threw a giant party, people spilling out of the stillhouse and onto a field where a band played Sunday night.

Science. Religion. Aliens. There was something for everyone. Well, almost everyone: State law prohibited Casey Jones from pouring drinks on Sunday night, but it opened on Monday — closing for an hour in the middle of the day so everyone could admire the eclipse in peace.

It had been too hot in the sun, so Ona the Voodoo Bone Lady left her Mandarin rat snakes in the air-conditioned car and stood under the eclipse alone.

She’d driven all the way from New Orleans with Damballah and Ellegua — those are the snakes — to perform a ritual that she said would put an end to hate and discord in the world.

In the dark, she doused herself with “blessing potion’’ and spread herbs around the crabgrass.

The eclipse had made short work of the oppressive midmorning heat, dropping the temperature. But the last seconds were ticking away, and the sun was about to emerge again over Hopkinsville. Soon, the interstate out of town would be backed up for miles, as thousands of people left for quite possibly the last time.

Though the crowds had been considerable, this city of about 30,000 had feared being totally overrun. The predicted crunch did not materialize, and the list of rumored celebrity appearances (everyone from President Trump to Justin Bieber) was finally whittled down to the governor and lieutenant governor, and the woman from the post office, who’d left her oversized replica stamps propped against a tent pole.

Homeowners along Route 91 from Hopkinsville to the farm had set out signs offering eclipse parking, the prices and enticements growing the closer to this field you got. $20. $25. $30. $50. “Have a Toilet!’’ But at least near the point of greatest eclipse, it did not appear those offers had drawn much interest.

Had it all been worth it?

Mary Ludwig waited perhaps too long to put her dark glasses back on. She’d wanted to see the “diamond ring’’ — a burst of gleaming white sun at the top of the ring of corona as the sun peeks back out.

They were in an ebullient mood. Four of the Ludwigs’ seven kids are getting married this year — diamond rings upon diamond rings.

Frank Ludwig turned away from what was left of the eclipse for a moment. Already people were packing up their cars. But his kids were still on the roof.

The totality had moved on, but the cheers began again.

PREVIOUS ARTICLE
Article 6 of 126
NEXT ARTICLE