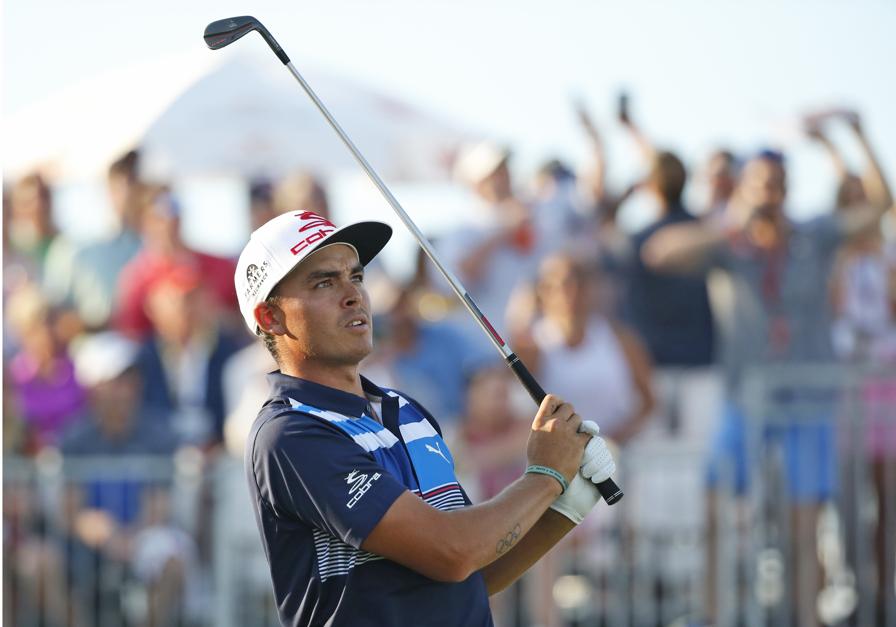 Winless in more than a year, Rickie Fowler finished strong Saturday for a 5-under-par 65 and built a four-shot lead going into the final round of the Honda Classic in Palm Beach Gardens, Fla.

Fowler made two birdies over the last three holes at relatively benign PGA National as everyone else around him was making mistakes.

Fowler holed a 10-foot birdie putt on the 16th, got a potential break with a ruling behind the 17th green that allowed him to use a putter instead of a wedge, and then closed with a drive so bold and big that he had only a 7-iron into the par-5 18th that set up a two-putt birdie.

That put him at 13-under 197. Fowler was four shots ahead of Tyrrell Hatton of England, playing his first PGA Tour event in Florida.

Hatton had three straight birdies to get within one of the lead until he went long on the 17th and made bogey, then left a wedge short of the 18th green and had to scramble for par and a 66.

Two-time major champion Martin Kaymer was in position to join him until he took bogey on the 18th and wound up with a 68. That left him in a large group at 7-under 203 that included Emiliano Grillo, who finished his 65 just as the leaders were starting the third round.

Ryan Palmer and Wesley Bryan, tied for the lead going into another tame day in South Florida, lost ground over the final two hours. Palmer played the final 11 holes in 4 over and shot 73, leaving him seven shots behind. Bryan hit consecutive tee shots into the hazard — including the par-3 15th that led to double bogey — and he made birdie on the 18th to salvage a 72.

This is the third straight week that someone built a sizeable lead on the PGA Tour after 54 holes. Jordan Spieth birdied three of his last four holes at Pebble Beach to lead by six (he won by four), and Dustin Johnson birdied his last three holes at Riviera to lead by five (he won by five).

Fowler hasn’t won since Abu Dhabi a year ago in January. His last PGA Tour victory was in September 2015 at the Deutsche Bank Championship. Protecting large leads is never easy, especially around a course like this. The forecast was for strong winds on Sunday, which could make it even tougher for everyone.

‘‘I know I have the lead, and it’s nice to go out in front,’’ Fowler said. ‘‘But you still have to play, and especially around this place, it can jump up and bite you at any time.’’

It never bit Fowler. He kept a clean card Saturday, and was never seriously in trouble. His longest par putt was from 5 feet, and he had only two others in the 4-foot range. His break came on the 17th hole when he went long into a clumpy lie in the collar of the rough.

Fowler immediately identified the area as newly sodded and felt his ball was in a seam of the new grass. He was able to get a free drop one club length away, and the ball hopped into the short grass, allowing for a simple two-putt for par. Fowler said the chip would have been relatively standard, and that he used putter only because of bare grass from where players had been walking.

But he was at his best on the par 5s.

Fowler, starting the third round one shot behind, hit a 6-iron on the green at the par-5 third hole for his first birdie. He finished with a 340-yard drive over the bunkers that allowed no more than a 7-iron into the green.

There also was small redemption from a year ago, when Fowler became the first player to go bogey-free over the opening 36 holes at PGA National. But on Saturday, he made no birdies, shot 74 and dropped out of the hunt.

‘‘I did better than last year,’’ he said. ‘‘I'm definitely in a better position that last year.’’

Gary Woodland made eagle on the final hole for another 66 and was in the group tied for third along with Sean O'Hair (65), Grillo, Kaymer and Bryan.

LPGA — Amy Yang of South Korea completed a third-round, 7-under 65 early Sunday to take a five-stroke lead into the final round of the rain-hit Thailand tournament in Chonburi.

Yang, who had a three-round total of 18-under 198, had to play the final five holes of her third round on Sunday after darkness suspended play late Saturday.

So Yeon Ryu, the 2011 US Women’s Open champion who already completed her third round on Saturday with a 68, was second.

Moriya Jutanugarn of Thailand’s 67 pulled her into a tie for third with South Korean Kim Sei-young (68) and Shanshan Feng, who shot 71. They were seven strokes behind Yang.

Danielle Kang (70) and Cristie Kerr (71) were the top Americans, in a group tied for ninth and nine strokes out of the lead.

European — The Joburg Open in Johannesburg was reduced to 54 holes after more rain left the course waterlogged and forced another suspension in play.

Many of the field hadn’t started their third round when thunder and lightning prompted organizers to halt play early in the afternoon. Rain then meant the third round will be completed on Sunday and will be the final round at the European Tour event at Royal Johannesburg and Kensington Golf Club.

Two South Africans, Dean Burmester and Jacques Kruyswijk, are tied for third a shot behind.

PREVIOUS ARTICLE
Article 78 of 227
NEXT ARTICLE