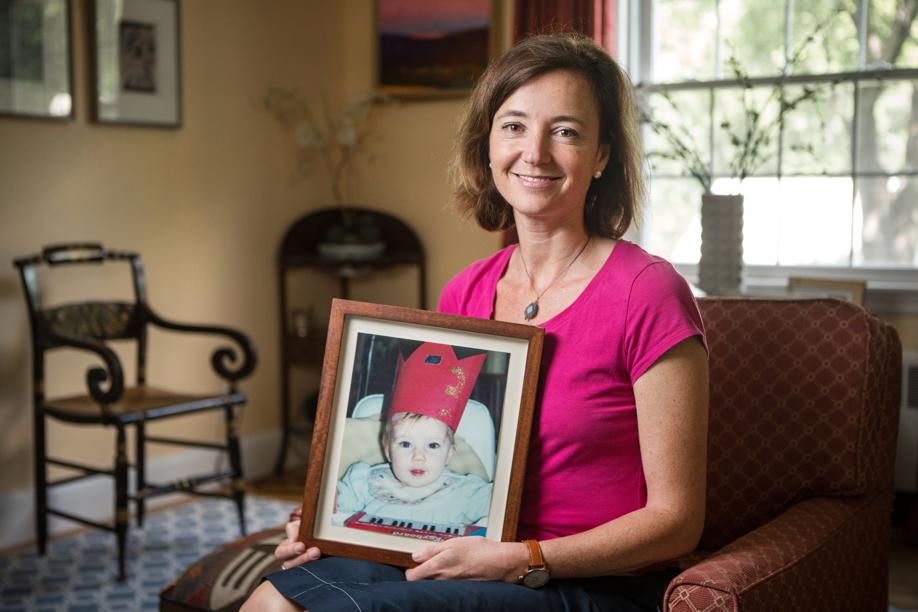 Blyth Lord’s daughter Cameron died when she was 2 years old, from Tay-Sachs disease. (Aram Boghosian for The Boston Globe) 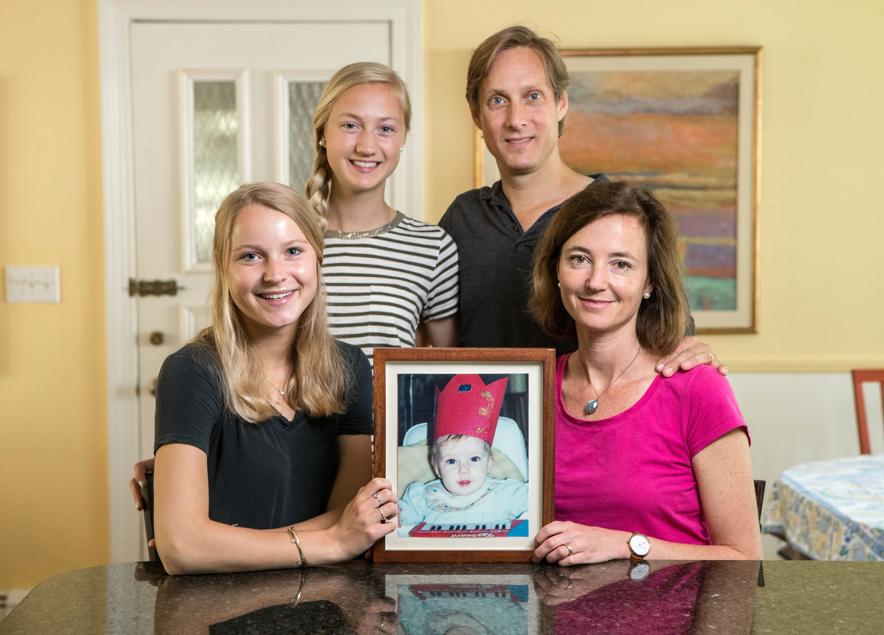 The Lord family (from left): Taylor, Eliza, Charlie, and Blyth, with a portrait of Cameron. (Aram Boghosian for The Boston Globe)
By Steve Maas
Globe Correspondent

The odds against it happening were astronomical. Within the span of five months, twin brothers each lost a baby to infantile Tay-Sachs disease, a genetic disorder that few survive beyond age 3.

Out of that double tragedy has emerged an organization that educates and supports parents whose children face life-threatening disease.

Its staff meets several times a week around a kitchen table at a home just behind the Boston College Law School campus in Newton. Upstairs is the bedroom where Cameron Lord died five days after her second birthday, watched over by her parents Blyth and Charlie Lord. Her fate followed the inevitable path of her cousin’s.

“I had to believe something was supposed to come of this. I felt called,’’ said Blyth Lord, founder of the Web-based Courageous Parents Network.

Nationwide, 500,000 children suffer from potentially fatal illness, and 50,000 die each year. Yet many families feel alone as they grapple with the unthinkable. The organization’s website has more than 260 videos of parents talking about their experiences and of therapists addressing end-of-life issues many people (including doctors) fear to raise.

Lord remembers a winter night 15 years ago when she stood alone at her kitchen counter awaiting word about her nephew Hayden, then in the final days of his battle with Tay-Sachs. Her husband was in Manhattan, comforting his twin, Tim Lord, and his wife, Alison.

She imagined how Alison — her best friend from college — must have been feeling.

“I’m not just terrified for her, I’m terrified for me, because that’s me in four or six months,’’ she said. “I had a visceral memory that I was glass, and I was going to shatter if you touched me.’’

And then her husband called. “Everything is peaceful,’’ he said. “Hayden is comfortable. Tim and Alison are OK, and we’re going to be OK.’’

But most people don’t have anyone to follow on the torturous journey of caring for a seriously ill child. Through the Courageous Parents Network, the former WGBH-TV producer aims to fill that role.

Boards of medical professionals and of parents who have cared for seriously ill children advise the three-year-old nonprofit. Lord herself has been a longtime board member of the Brighton-based National Tay-Sachs and Allied Diseases Association.

In addition to managing the website, she and her two staff members — both bereaved mothers — speak at hospitals and other medical centers about the importance of caring not just for the patient, but for the family, too.

In particular, they promote palliative care, demystifying the notion that it’s just for the dying. “It is pain and symptom management and relief of the spiritual, emotional, and psychological burdens that accompany serious illness,’’ Lord said.

“They are understanding the family experience in entirely different ways,’’ O’Malley said. “That realm is eye-opening for them, transformative, in fact.’’

Rebecca Kuczarski, the network’s community and outreach associate, recounted the sleepless nights she spent at the hospital after the youngest of her three children, Sophia, was diagnosed at age 3 with leukemia: “Thoughts pop up: What am I going to do if it doesn’t turn out the way we think it’s going to turn out? How am I going to make sure I’m balancing my time [among my children] so that they don’t resent their sister? How is this going to affect my marriage?’’

Today an average of 1,400 unique visitors — from as far away as New Zealand — log on to the website each month in search of answers. More than 650 people, including many medical providers, have signed up for free membership. Members can participate in webinars and, as of this month, in a private 24-hour, online forum.

After her daughter was diagnosed, Lord said, one of her biggest fears was that she would be left with feelings of guilt. A grief counselor the family engaged after the diagnosis assured her that she would not feel regret “because you will know you did the best you could with the information you had in that moment.’’

Despite the name she gave to her organization, Lord said, she didn’t feel courageous at the time she was caring for her dying daughter.

“Parents are going to try to do the best they can no matter what,’’ she said. “They’re not choosing to be courageous. However, I look at these families, and I think, my God, what you’re doing is absolutely amazing.

“I wanted the title to remind them of how amazing they are.’’

At the time of Cameron’s death, Lord had an older daughter, Taylor, and was pregnant with another, Eliza.

Every May, the family celebrates Cameron’s birthday by watching a film compiled from home videos of her short life.

“She was an incredibly happy, joyful little creature who loved her big sister more than anything,’’ Lord said.

Taylor was just two years older than her sister. “We didn’t tell her Cameron was going to die,’’ Lord said. “We simply told her that Cameron had a disease that she didn’t cause.’’

But after her cousin died, Taylor “started getting quieter about it all. She was clearly nervous but she still wasn’t asking questions, but you could tell she was making connections,’’ her mother said.

The week of Cameron’s death, Taylor refused to go to preschool, but she also avoided her little sister’s room. Every day, a relative would take Taylor somewhere fun.

On Cameron’s last day, she stopped breathing three times for an extended period. Each time her parents thought the moment had arrived.

Taylor returned home about 7 that night. She rushed upstairs to her sister, gave her a kiss and said, “Good night, Cameron, I love you.’’ About 20 minutes later, Lord said, “Cameron really did take her last breath.’’

For more information, visit courageousparentsnetwork.org.Steve Maas can be reached at stevenmaas@comcast.net.

PREVIOUS ARTICLE
Article 220 of 231
NEXT ARTICLE