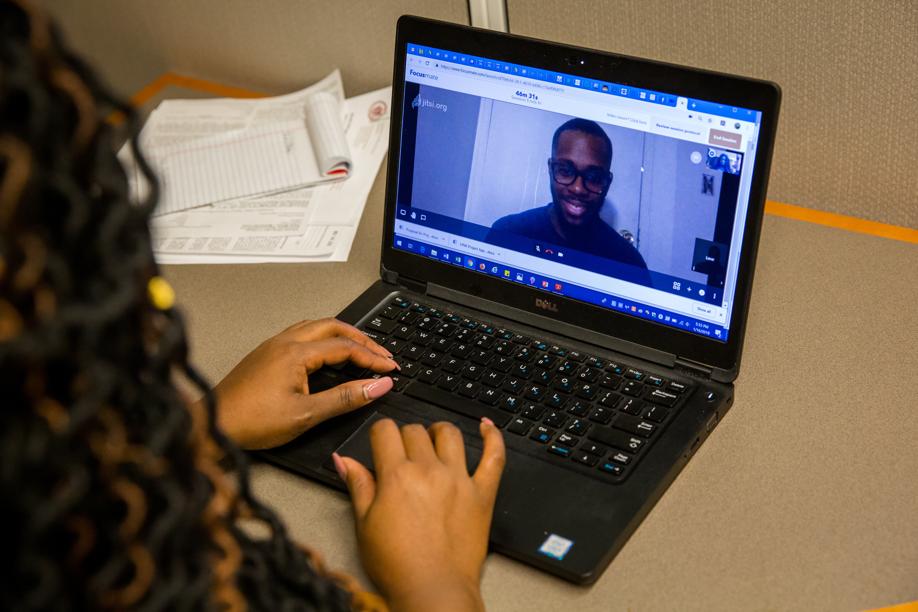 Ruby Maddox, who calls herself a “Focusmate evangelist,’’ uses the tool 5 to 10 times a week. (Matthew Cavanaugh for The Boston Globe) 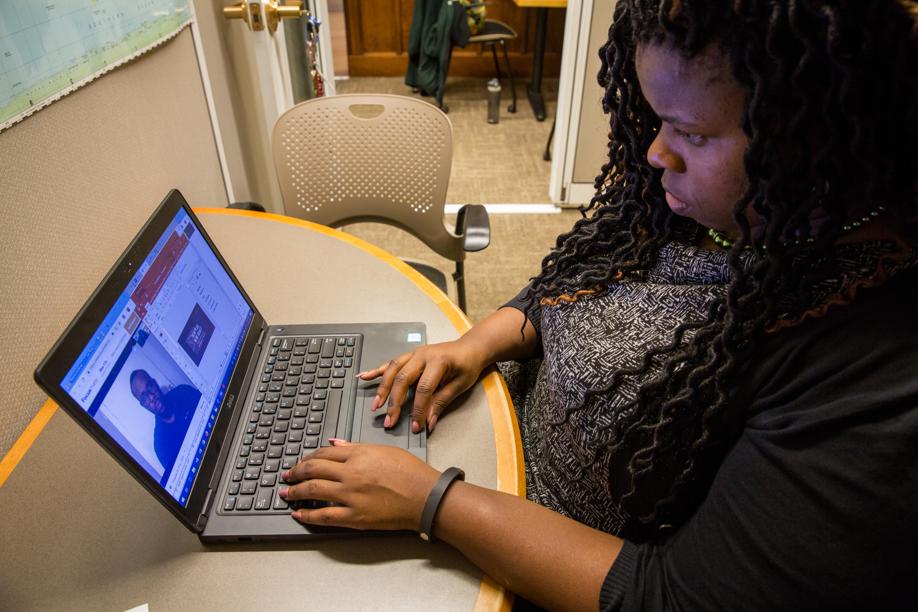 Do you have trouble getting things done when you work from home? Would it help to let a stranger watch you do it?

As creepy as it sounds, some people swear by it.

They are devotees of Focusmate, a productivity tool that pairs fellow procrastinators online for 50-minute “virtual co-working’’ sessions. They introduce themselves via video, state their goals, then get to work — no idle chit-chat, just two remote colleagues toiling away.

It’s a little bit Big Brother, a little bit Chatroulette (the website that matches up random strangers for webcam conversations that tends to attract exhibitionists). And it’s definitely a whole lot odd.

But apparently, working virtually alongside someone you’ve never met makes some people buckle down and power through their to-do lists. Kind of like a workout buddy, but for work.

In a small internal survey of Focusmate’s users, 93 percent of respondents said their productivity significantly increased when they used the tool, and a quarter of them said it more than doubled.

More than two years after Newton native Taylor Jacobson launched the free service, about 8,000 people have signed up in 70 countries, logging an average of 265 sessions a day.

Some choose to minimize or hide the other person while they work; others put them on dedicated screens. The sessions can be one-offs, or strung together to approximate a workday, and at the end, each partner lets the other know what they accomplished.

Ruby Maddox of Springfield, a self-professed “Focusmate evangelist,’’ uses the tool 5 to 10 times a week to complete administrative tasks. And she has a lot of them. In addition to her full-time day job as an internship and study abroad adviser at Mount Holyoke College, Maddox, 38, runs an international leadership development program for black men and is launching a consulting business.

Knowing that someone is counting on her to show up for a session makes her less likely to “flake out,’’ even though the other person has no real power to make sure she’s being productive. Remote co-workers can report each other to the company for goofing off, though, and the system can detect if a person is late or doesn’t show, and can freeze habitual offenders’ accounts.

“I got my taxes done in February last year thanks to Focusmate,’’ Maddox said. “Before Focusmate, it was like April 30 or some craziness.’’

Still, she said, her family doesn’t get it.

“Stranger danger, that’s what they call it,’’ she said, noting she feels no pressure to get out of her pajamas for a person she’s never met. “I tell them I have to get up early [and they say] ‘Oh, stranger danger?’ ’’

The concept for the company was born after Jacobson, a 33-year-old Milton Academy and Duke University graduate, found himself struggling to get motivated outside the confines of the corporate world. After studying the science of getting things done, he and a fellow procrastinator, a clean energy investor, tried working together over Skype.

“Even after the first interaction, it was crystal clear that we had found something that was magical,’’ he said.

As technology improves, more people are working from home than ever — 43 percent of US employees work remotely at least some of the time, according to Gallup, in addition to the legions of freelancers and those with side gigs. And for many people, the lure of snacks in the pantry or the ping of a message on your phone is impossible to ignore.

The concept is backed by a substantial amount of academic research: Working side by side with someone is more productive than working alone (University of Chicago). Laying out a plan makes you more likely to follow through (Harvard Kennedy School). Time pressure can increase productivity (University of California Berkeley). Reflecting on a task after it’s completed builds confidence in the ability to achieve goals (Harvard Business School).

These conditions aren’t ideal for highly creative tasks, said Teresa Amabile, a Harvard Business School professor who has studied productivity. But it can definitely help with more rote tasks.

“When people are doing a routine activity,’’ she said, “people work faster and harder and more effectively when they have other people working alongside them or when they’re being watched.’’

Nausheen Eusuf, a poet and PhD candidate at Boston University who credits Focusmate with helping her finally finish her dissertation, likes the sense of community on the site. Eusuf, 38, has a core group of people she uses repeatedly, including a Renaissance historian in the United Kingdom writing a book and a naturopathic physician in Hawaii who likes to have a virtual partner while doing paperwork. When Eusuf sees them on the calendar, she tries to sign up for the same time slot, and has become invested in their success.

Likewise, her counterparts have shared her happiness at submitting a draft of her dissertation after eight years in the program. Since finding Focusmate in July, she cranked out 116 pages — more than she had produced in the previous 2½ years — sometimes doing as many as nine Focusmate sessions a day.

“I’ve tried Ritalin and Adderall,’’ she said, “and Focusmate works better for me.’’

Eusuf’s adviser was so impressed that she started using Focusmate, too.

It all goes back to tribal psychology, Jacobson said. In other words, people are hard-wired to stick together. A paid premium service in the works would take it even further, potentially letting subscribers customize the group of people with whom they’re paired. It would also start generating revenue.

Cole Whetstone, a 22-year-old recent Harvard graduate who before finding Focusmate was “the kind of guy who would write a 25-page paper in 24 hours,’’ has found he’s most productive when matched with Heather G., who tracks wolf populations in Idaho. Her task is worlds away from his — applying to grad schools to study ancient Greek philosophy — but for some reason it works, he said.

There’s just something about having to be accountable to a stranger that makes you stick to a plan, he said. If it was a friend, you might be tempted to talk, or to put off a session, or even go grab a burrito.

“There’s just that much more leniency in someone you know,’’ he said.

PREVIOUS ARTICLE
Article 5 of 120
NEXT ARTICLE