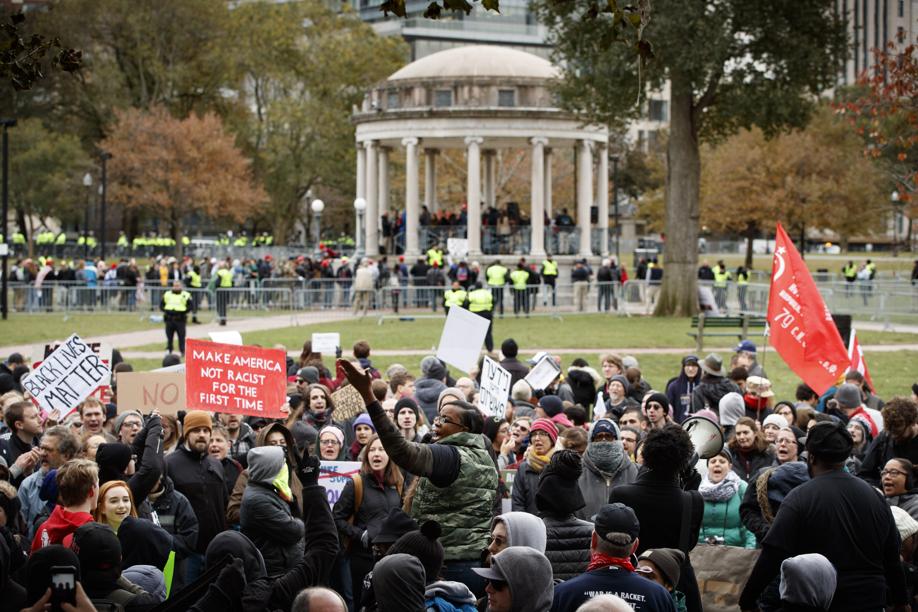 Hundreds of counterprotesters gathered on Boston Common and tried to drown out the rally speakers on the nearby bandstand. (Dina Rudick/Globe Staff) 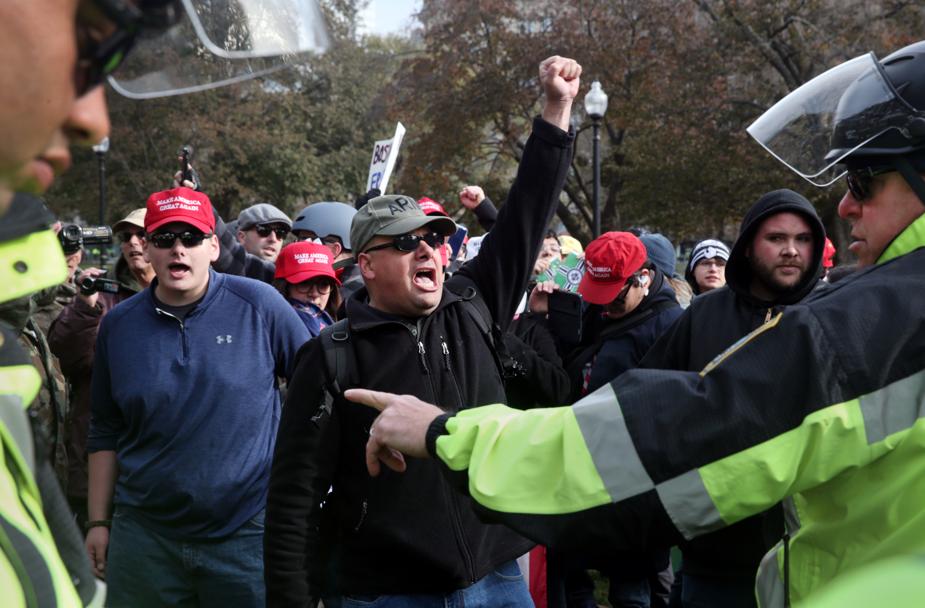 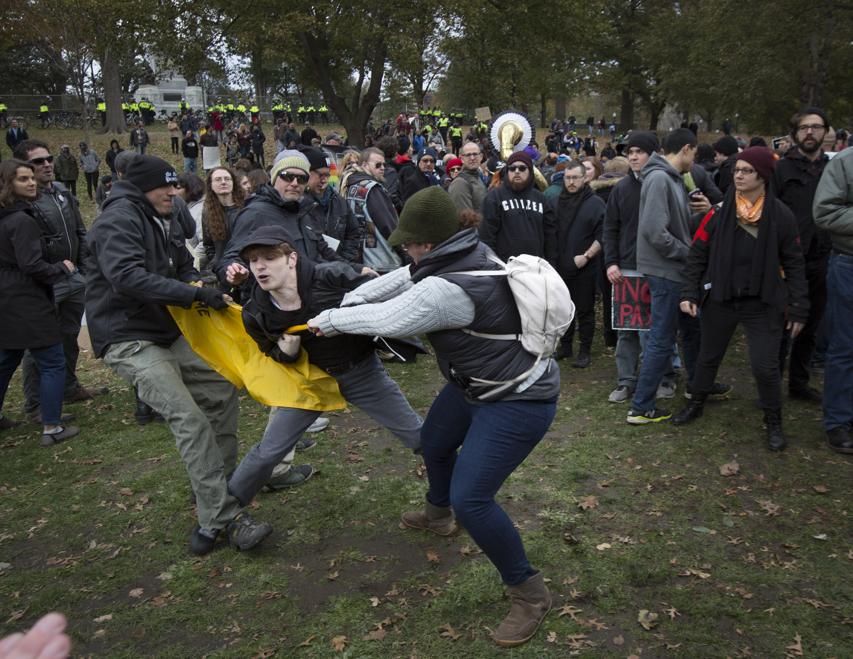 Rallygoers and protesters battled over a “Don’t Tread On Me’’ flag before police stepped in. (Photos by Craig F. Walker/Globe Staff) 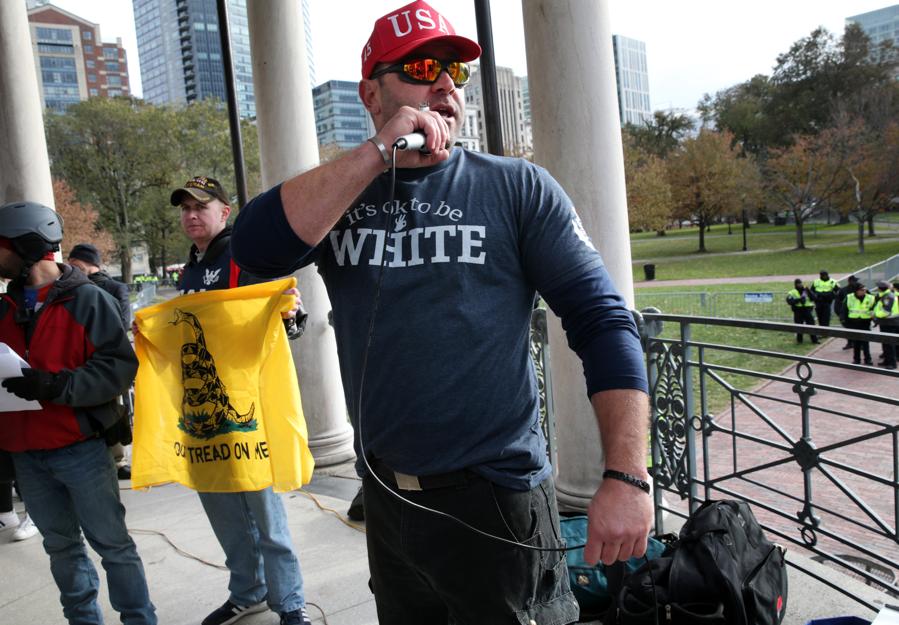 Kyle Chapman wore an “It’s OK to be white’’ T-shirt while speaking on Boston Common.
By Evan Allen and Laura Crimaldi
Globe Staff

Protesters wearing camouflage and Make America Great Again hats clashed with counterprotesters clad in black and chanting anti-fascist slogans on Boston Common Saturday afternoon, at a rally that resulted in heated words and a few arrests but no serious violence.

“Commie scum!’’ shouted rallygoers, who numbered about 100, and who were separated from about 1,000 counterprotesters by police, who formed barricades with their bodies and bicycles.

“No Trump, no KKK, no fascist USA!’’ the counterprotesters returned.

Rally organizers, a group called Resist Marxism, were denied a permit for Saturday’s event, but carried on regardless. City officials said they rejected the permit application because of a race planned to start on the Common Saturday morning — the Camp Harbor View Citython 5k. The race was over hours before the rally began.

The demonstration, called Rally for the Republic, started at about noon, when attendees marched onto Boston Common toward the bandstand — and a phalanx of counterprotesters. As the two groups approached, they hurled vulgar curses and taunts. One woman screamed “Freedom!’’ as she tore off her jacket to reveal a red tank top emblazoned with the same exclamation.

After a few moments of tension, police turned the rallygoers around and marched them into the bandstand from another direction, checking for weapons before allowing people inside the gated-off area.

Counterprotesters assembled outside the gates as officers monitored the scene from all sides.

Some counterdemonstrators gathered around a park bench and took turns addressing the crowd with a microphone, while others shouted from a distance at the people gathered for the rally.

Several scuffles unfolded outside the area designated for the rally.

Police intervened after a group of counterprotesters confronted a man carrying a Gadsden flag bearing a rattlesnake and the words, “Don’t Tread on Me.’’ The counterprotesters tried to take the flag, prompting officers to separate the two sides.

As the rally was winding down around 1:30 p.m., counterprotesters wearing black clothing and face masks clashed with police.

Officers singled out one man and took him into custody as some people pleaded for him to be freed. A second man was handcuffed a short time later.

Some taunted police, yelling “Who do you protect? Who do you serve?’’

During the confrontation, at least one officer was seen striking a counterdemonstrator on the shoulder.

A Boston police spokesman said three men were arrested: two for disorderly conduct and one for assault and battery on a police officer. He couldn’t provide details about the arrests.

In a statement, police Commissioner William B. Evans said the event “couldn’t have gone much better’’ in terms of public safety.

Inside the area cordoned off for the rally, Rinaldo Del Gallo III was first to address the gathering. The Pittsfield lawyer wore a Bernie Sanders sweatshirt and described himself as a democratic socialist and supporter of transgender and immigrant rights.

He said most rallygoers he was addressing probably disagreed with him, but they were united by their belief in the First Amendment. On Wednesday, Del Gallo filed a motion in federal court in Springfield for an injunction against Boston officials to ensure that the rally organizers’ rights were protected.

“You may be against this speech today, but they might go against your speech tomorrow,’’ he shouted, as the counterprotesters chanted in the distance. “I’m here to protect all of it.’’

Ludwig Haken II, a 32-year-old from Manchester, N.H., who served in the infantry in the Army for four years and did a tour in Afghanistan, called for all sides to unite over free speech.

“We should have an antifa guy speaking,’’ he said, referring to the masked and black-clad anti-fascist protesters who embrace violent opposition to the far right. “Everybody should have their say at the table.’’

Other speakers evoked more violent imagery. Kyle Chapman, who gained notoriety this year after a video went viral of him smashing a wooden post over the head of an antifascist protester at a march for President Trump in Berkeley, Calif., called for rallygoers to fight, bleed, and die for freedom.

Chapman wore an “It’s OK to be white’’ T-shirt, a spiked ring, and mirrored goggles, which he said were to protect his eyes from mace. He said he’d been attacked and had his car vandalized, and was facing up to eight years in prison for his actions at what he called “the first battle of Berkeley,’’ but he has not given up the fight. He implored the crowd to the same.

Saturday’s event was planned after an August free speech rally on the Common was overwhelmed by counterprotesters. That rally occurred just a week after a deadly demonstration in Charlottesville, Va., where white nationalists clashed with counterprotesters, one of whom was killed.

The organizers of Saturday’s rally have protested the suggestion that they are providing a platform for racists, and many speakers emphasized that they were championing free speech, not hate.

“We have a fascist in the White House and he needs to be driven from there,’’ said Dr. Phillip Rice, who works in the emergency department at North Shore Medical Center in Salem. “We know what fascism brings. We saw it in Germany. We saw it in Italy. And it’s going to happen here.’’

Rosemary Keane, a member of Dorchester People for Peace, beat a small saucepan with a wooden spoon. She said her group supports Black Lives Matter.

“I just think the alt-right is so very wrong,’’ Keane said. “The racism that’s involved in it is really the most dangerous thing in our country.’’

“Stop hating. That’s basically what I want to be out here for,’’ she said.

Journalists were allowed into the bandstand area on Saturday’s rally, a shift from the August event, when only organizers and a handful of speakers and attendees were allowed close enough to hear.

About a dozen observers from the American Civil Liberties Union of Massachusetts were stationed throughout the Common to monitor media access to the event.

Mark Sahady, who organized Saturday’s demonstration, said about 100 people marched to the bandstand and were allowed inside, but more stayed behind when police told them they could not have flags with signs or poles.

Anyone who did not come with the organizers, he said, was barred from entering, meaning that speakers could not address the general public.

“Not letting us speak to the public violates our First Amendment rights,’’ he said.

PREVIOUS ARTICLE
Article 26 of 225
NEXT ARTICLE