A whale of an art project for a museum
Space sought for 1,275-foot painting
PREVIOUS IMAGE 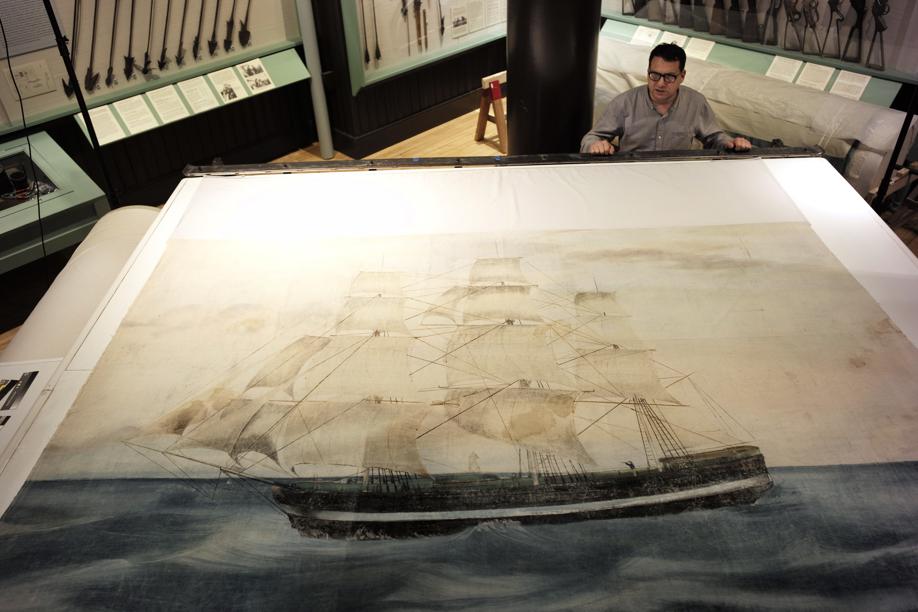 D. Jordan Berson, director of collections at the New Bedford Whaling Museum, stood next to a portion of the 1848 “Grand Panorama of a Whaling Voyage ’Round the World,’’ (Steven Senne/Associated Press)
By Steve Annear
Globe Staff

The historic artwork of a whaling expedition is larger than a humpback whale itself. It’s so large, New Bedford Whaling Museum officials are still searching for the perfect place to put the 1,275-foot painting on display in the seaside city next summer.

But its mammoth size won’t keep the world from exploring the significant piece of maritime history in all of its glory, whenever they want. It’s 2017 — and everything is online these days.

The museum recently finished digitizing “Grand Panorama of a Whaling Voyage ’Round the World,’’ a massive work of art created in the mid-1800s that was recently pulled from storage and restored by a textile conservator and the institution.

Michael Lapides, the museum’s director of digital initiatives, said people will have access to the painting on an interactive website later next year. The digital version will be released at the same time the museum unveils a physical exhibition. The museum shared some digitizied images of the work with the Globe, however.

“We will find some place to hang this panorama somewhere, but it won’t be a permanent display,’’ said Lapides. “So having it online will be the lasting record for future research, and [for] anybody to learn about this artifact. It will be continued access to be able to study and share this, so that’s exciting.’’

The moving panorama, created by Benjamin Russell and Caleb Purrington in 1848, is contained on four towering rolls. Stretched out and placed side-by-side, they tell the story of a whaling adventure that begins and ends in New Bedford, with scenes of the Azores, Cape Horn, the Pacific Islands, and Rio de Janeiro in between, according to the museum.

It is said that the mural is the longest painting of its kind in North America. When it was completed, the panorama was displayed in theaters as it toured the country. Narrators would use cranks and reels to make it move, as they told stories about whale-hunting expeditions, the Associated Press reported.

“It was pre-movies — a moving panorama,’’ Lapides said.

The historic artifact was donated to the museum in 1918. After being on display for many years, its cotton sheeting began to deteriorate and show signs of aging, prompting the museum to put it in storage around 1969. It hasn’t been shown in its entirety since.

For almost two decades, the museum has been planning and plotting restoration efforts, officials said. Last year, after securing funds from private donors, foundations, and government grants, the conservation of the artwork began. As of late last month, that portion of the project had wrapped up.

While the panorama was being carefully tended to, museum officials took advantage of the opportunity of having it out in the open.

Lapides and staff from the institution were tasked with using a digital camera to capture every inch of the artwork. The idea was to eventually share its very detailed, visual storyline with a much larger audience at the click of a mouse.

From a balcony in the museum, Lapides set up a rig using a C-stand and a boom connected to his camera so he could take photos of the painting from overhead. With the camera in place, he used a laptop to remotely capture roughly 240 photos that would eventually make up the digital image of the four rolls.

Every time he took a photo, two employees standing beneath the camera on the first floor would have to roll the panorama forward a little bit more to ready the next shot. It took six months to complete.

“I did it in tandem with the conservation work. They would work on a roll, and then before they switched onto the next roll I would do the photography,’’ he said. “They would wait for me to finish that and make sure I got everything I needed.’’

Each of the photos was later stitched together on his computer to create the full panorama as it was intended to be viewed. The museum plans to create a video to go along with the interactive website, where the panorama will be available.

“In five years, I’m not going to be able to say I have done something as great as this,’’ Lapides said. “There’s only one of these panoramas. If you can find a longer panorama, let us know.’’

Writer Nathaniel Philbrick, whose expertise is in the history of Nantucket through the whaling era, said the museum should be credited for making the painting more accessible to people both in its physical form and online.

The author of “In the Heart of the Sea’’ said the panorama is an important visual artifact associated with whaling, and the fact that it hasn’t been available for so long makes it all the more significant and intriguing.

“The sheer scale of it is incredible, and given that it’s about the whale is appropriate,’’ he said. “They just don’t build spaces for this type of thing. Being able to see it on your computer will be really cool.’’

Steve Annear can be reached at steve.annear@globe.com. Follow him on Twitter @steveannear. Information from the Associated Press was used in this report.

PREVIOUS ARTICLE
Article 36 of 114
NEXT ARTICLE