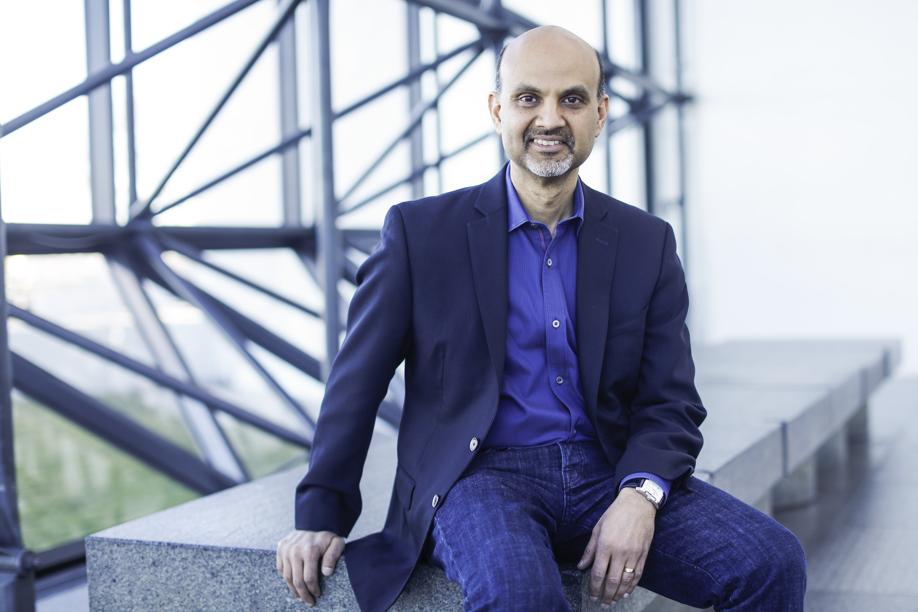 Carbonite CEO Mohamad Ali immigrated to the United States from Guyana as a child. On Wednesday, he spoke at a naturalization ceremony at the John F. Kennedy Presidential Library and Museum about his experience and the importance of working hard and believing in the American Dream. After arriving in New York at age 11, Ali went on to receive degrees from Stanford University and worked at IBM and Hewlett-Packard, before being named CEO of Carbonite, a Boston-based provider of data protection software and services, in 2014. Here are his remarks at JFK Library in full:

I am deeply moved by the opportunity to be here today, to share this momentous occasion with you, and to personally return to the ceremony that created more possibilities for me than I could have dreamt of.

It was 1981, 36 years ago, when my mom and I arrived in America, at the John F. Kennedy Airport in NYC. We had a total of $34 in our pockets, combined. After clearing customs, we approached a big and scary machine. We had never seen such a thing before and did not know how to use it. Later we learned that the machine was called an escalator.

At that moment, looking up from the bottom of the escalator, the idea that I would one day be CEO of a company, and be selected to speak at this event, was unfathomable. If you had told me that I would be standing here today, I would have thought you were mad. How could this be possible? It is possible because this is America.

My brothers and sisters, my message to you today is simple: Despite the many challenges we face as a country today, the American dream is alive and real. You can be the hard-working American mechanic whom the community respects, like my father. You can be the CEO of a company, like me. Your daughter can be the governor of the state, like Nikki Haley in South Carolina. And your descendent can be the president of the United States, like President John F. Kennedy, great-grandson of immigrants. Your dreams and your dreams for your children, however modest or grand, can be real. I stand before you today as a real-life example, and I will share with you a bit of my story. Your story may be similar, or it may be different, but we have one thing in common — we have worked hard, very hard, to earn the right to be Americans; and my friends, we will continue to have to work hard to protect that right.

I was born in 1970, under the rule of a dictator in the country of Guyana. In that very year of my birth, Guyana established relations with North Korea and the Soviet Union, declared the country a “co-operative republic’’ and banned imports into the country, including flour. I was sure it was to celebrate my birth. Our president started nationalizing industries, and by 1979 the private sector was reduced to only 10 percent of the economy. There was widespread shortage of food and fuel. The water supply stopped working where I lived, and the electricity was often out.

My parents had both grown in up in very poor families. My mother worked in the rice fields from the age of 12, and could not afford shoes. My father came from a large family of subsistence farmers. My mother worked hard and eventually became a teacher, and my father a police officer. A police officer did not make much money in Guyana, nor did a teacher, but we had a home made from wood, instead of mud, and enough money to buy the basics.

The problem was that there was little to buy, so the government told us to grow vegetables. Without running water, we walked long distances to fetch water from the village well or nearby streams for the vegetables. There was also a shortage of gas and kerosene for the stoves to cook food, so many people built mud stoves and burned wood.

In 1980, my parents decided this was no life for their three young children, then 3, 5, and 10 years old; and that my father would go in search of opportunities for his family and come back for us at some time. But he was scared to leave us. How would we fend for ourselves? How would we procure the basics? But my mother insisted that he go. She was, and still is, a small but determined woman and she would protect her children by herself.

The following four years were very difficult. Eventually, my father found his way to America; my mother and I came a year later; and three years later, my younger brother and sister arrived. Being away from her two youngest children for three years, much longer than expected, was torture for my mother. But at the end of these four years, we were all back together, living in near-poverty in New York, but together and hopeful. In 1991, we became citizens in a ceremony like this one.

I went on to get engineering degrees from Stanford University, worked at IBM and Hewlett-Packard, and today I am CEO of Carbonite.

You, my brothers and sisters, who have seen this type of hardship, and in many cases even worse hardship, know what a gem America is. You are the best of humanity, and we, the immigrants who came before you, whether last year or a hundred years ago, are proud to count you as equal among us. I know that you will vigilantly defend your new freedoms, your new country and our joint values — despite the challenges that those freedoms and values face today in America. You will work hard, study hard, create businesses, create jobs, and build our American economy, because you know what life is like elsewhere and you chose America. It is from the best of humanity, immigrants to this land, that America is built. You have been our nation’s strength and you will continue to be. Your citizenship is our badge of honor and our hope.

My fellow immigrants, the American dream is alive and real. Today, you are an equal member of our society. I urge you to participate in every way you can — in politics, in education, in your community — for the betterment of you, your family, and our country.

Thank you, and congratulations!

ª Carbonite CEO Mohamad Ali emerged as one of the most prominent tech executives in the Boston area during the past decade or so, first by leading a series of acquisitions for IBM and then working in prominent positions with Avaya, Aspect Software, and Hewlett-Packard.

ª Ali joined Carbonite, a Boston-based provider of data protection software and services, in December 2014 as its top executive. He subsequently also joined the board of Bedford-based robot maker iRobot Corp.

ª More recently, Ali has been outspoken about the tech industry’s concerns regarding the Trump administration’s travel restrictions and the impact these new limits will have on the tech workforce. Ali, who was born in Guyana, appeared next to Attorney General Maura Healey at a press conference announcing a legal challenge to a Trump executive order in January. And he traveled to Washington last month in part to represent the Massachusetts Technology Leadership Council on the issue.

PREVIOUS ARTICLE
Article 108 of 156
NEXT ARTICLE