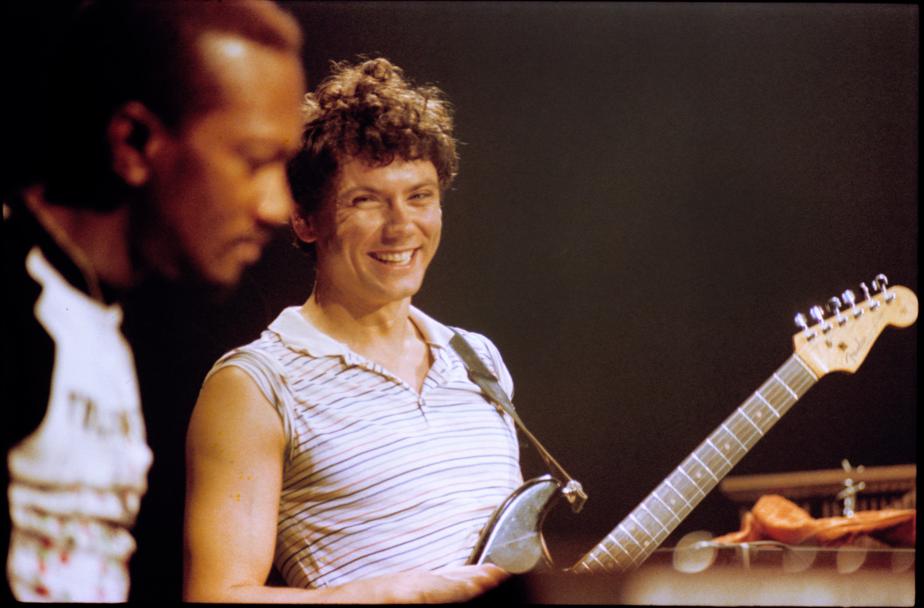 Harrison went into the startup world after the band broke up. (Craig Howell/File 1982)
By Rebecca Robbins
STAT

Jerry Harrison is best known for burning down the house on keyboards and guitar for the ’70s and ’80s rock band Talking Heads. So you might ask yourself: How did he get into equity crowdfunding for medical companies?

Harrison, who turned 68 last week, went into music production and the tech startup world after the band broke up in 1991. Those connections led him to cofound the crowdfunding site RedCrow, which launched in November to connect investors with early-stage companies working on health care and medical tech.

Unlike crowdfunding platforms such as Indiegogo where contributors donate to a business idea in exchange for a reward, RedCrow users take out a financial stake in a company. So far, that model has helped three different companies raise a collective $2.3 million for their work on an app for family medical information, a device to enable cardiac monitoring during MRIs, and microbiome-catered dietary supplement recommendations. (For now, only deep-pocketed investors can invest on RedCrow, but the site plans to expand to lower-net-worth investors.)

STAT got on the phone with Harrison to hear more about how RedCrow’s going. Here are some highlights from the conversation:

What problems did you see in existing crowdfunding sites, and what are you doing differently?

When I look at the current landscape of different crowdfunding companies, they were so broad. You might be looking at a deal for a medical product, which is right next to a brewpub, which is next to a lingerie company. We limited ourselves to being just medical for right now.

Also, in the current crowdfunding landscape, there was very, very little analysis of whether they had what it takes to become a successful company. We felt that we could sure get beyond some of the basic things in putting forward investment opportunities. I liken it to: You walk into a restaurant, and if the restaurant doesn’t pass the smell test, you go to a different restaurant. And we wanted to make sure our companies get past the smell test.

Crowdfunding projects, particularly in the medical realm, have been known to fail or disappoint contributors. How do you vet the quality of the science behind these ideas?

We have doctors and other advisers who try to look at the company and say: Does this company really have a chance of success?

We’re also trying to get feedback from our crowd in the discovery process. Consider one of our investment opportunities: MiRTLE, which is working on a limitation with MRIs. Cardiologists and ­radiologists and people in situations that are stymied by existing technology would be ideal to look at the company. So we think that as the site gets larger and we have more and more users, we will be mining the knowledge base of the very people that are doing the ­investing.

All that said, we have to be careful in claims we make. We can’t imply that something is totally vetted. Investing in startups is a high-risk business. Most of them do not make it.

How deep do you personally get into the science?

I’m now suddenly having to know a lot more about biology. I’m not going to say that I’m at the point where I understand all of those things, but I do read the presentations that the companies are giving.

Do the Talking Heads come up often in your work with RedCrow?

The Talking Heads were a very popular band. And we also have an audience that, I would say, is more erudite than that of your average band. So yes. I think people sometimes are more likely to take a meeting.

Do you still play guitar?

I’m a better keyboard player than I am guitar player. I began on the keyboard, so I do that more.

PREVIOUS ARTICLE
Article 80 of 227
NEXT ARTICLE