All gave some, some gave all
Community remembers sacrifices of the fallen at Memorial Day observance 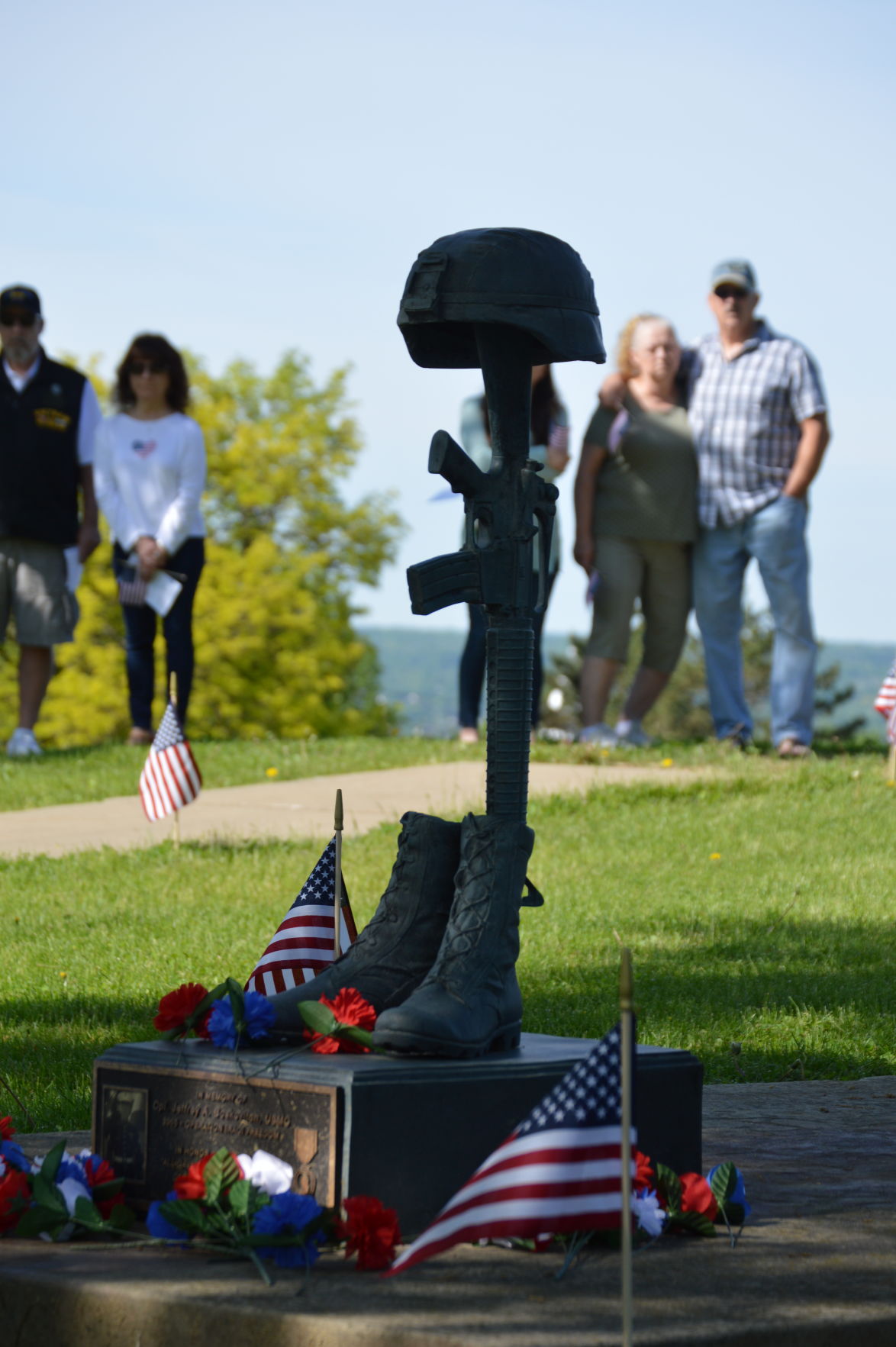 Flowers were placed at the foot of this Battlefield Cross at the Cpl. Jeffrey Boskovitch Memorial at the City Green for each of the local soldiers who died defending the nation or who have served and are no longer living. Photos by JAIME ANTON 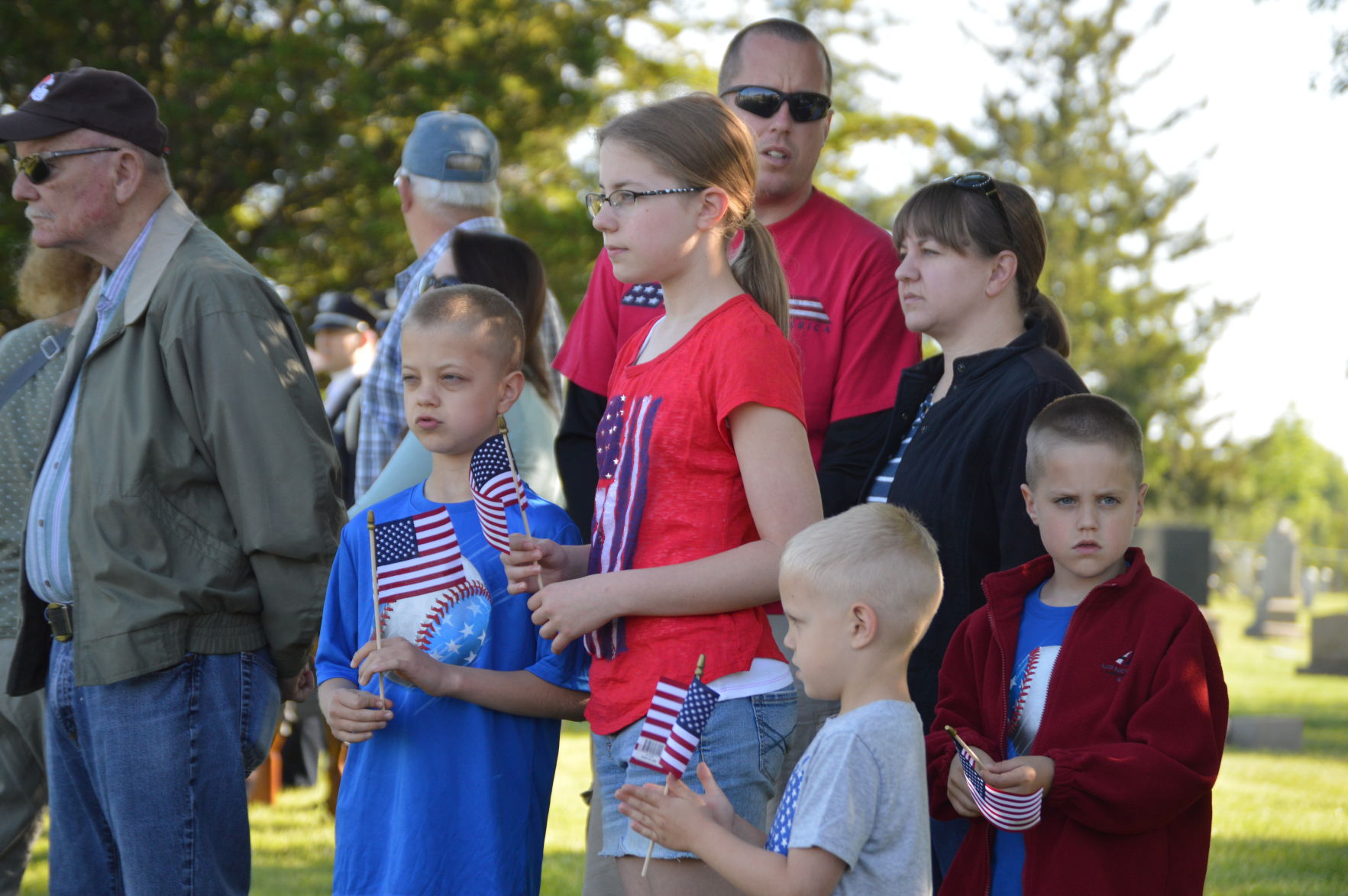 The Creutz Family were one of many North Royalton families gathered to pay their respects to the fallen. From left to right are siblings Connor, 9; Caroline, 11; Corbin, 5; Colin, 7 and their parents Kevin and Lauren. 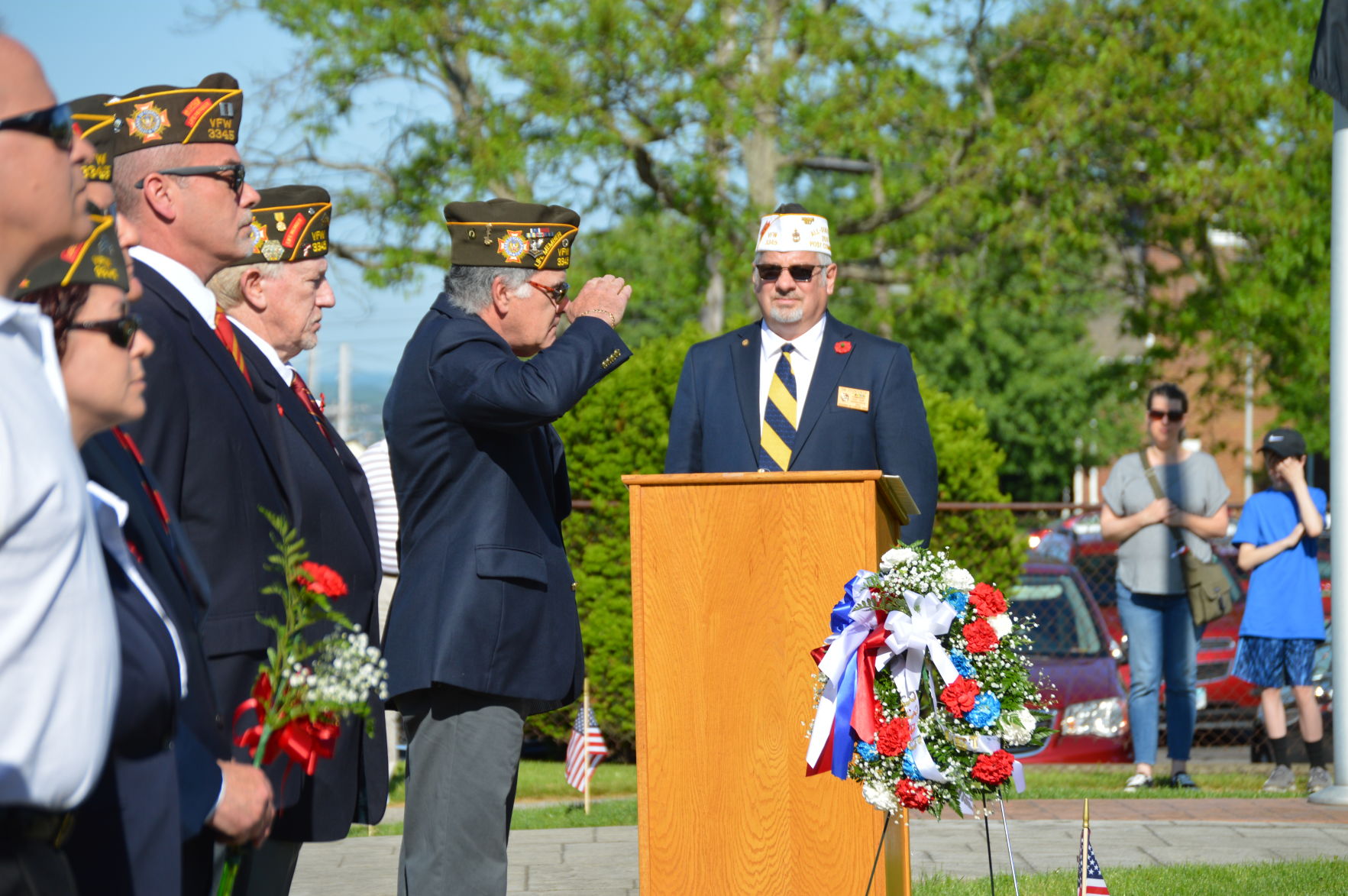 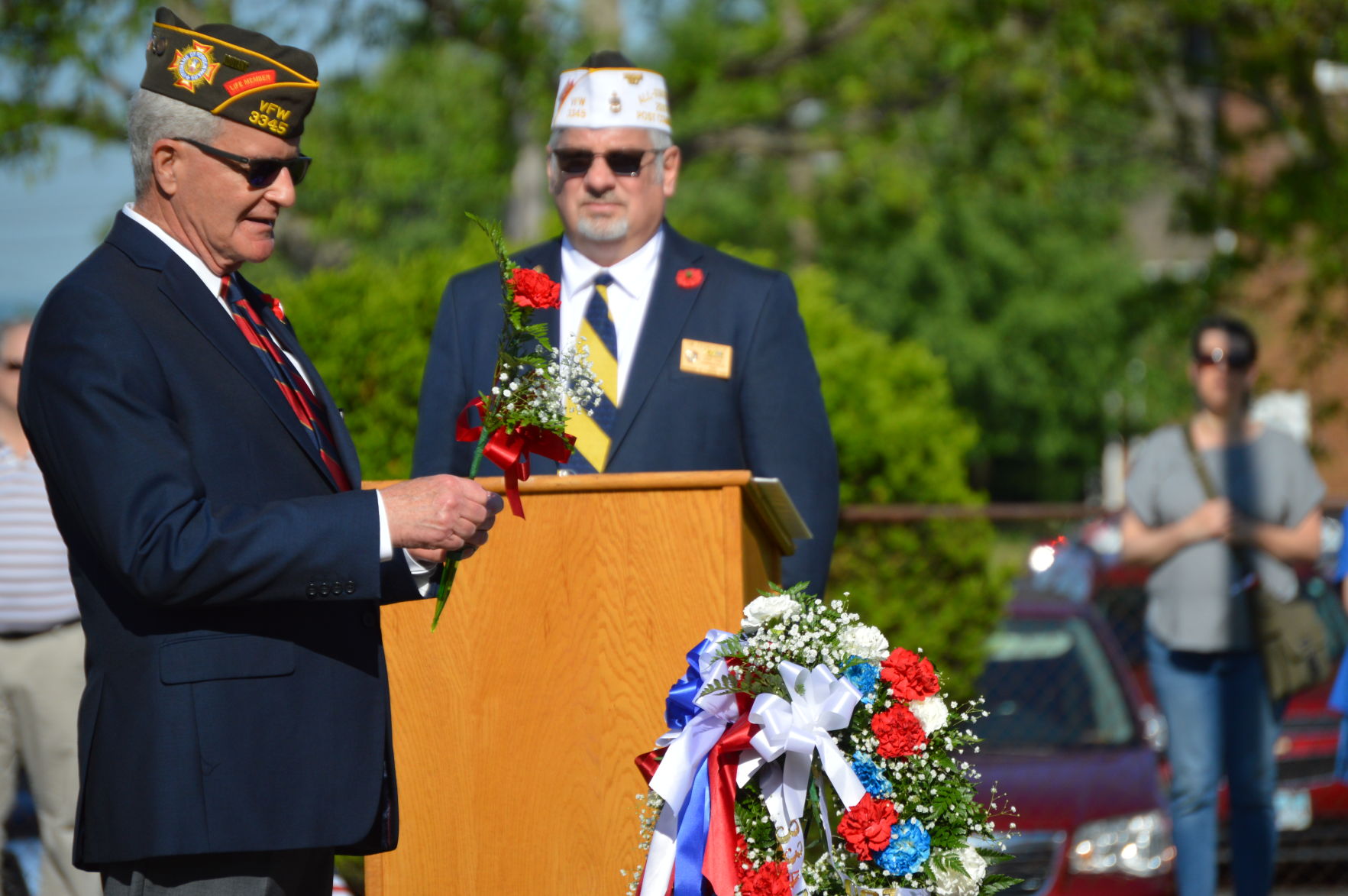 Officer of the Day Jim McCann shares about the red flower, which signifies devotion and everlasting remembrance, before placing it on the wreath. Strongsville VFW Post 3345 Commander Tim Zvoncheck looks on in the background. 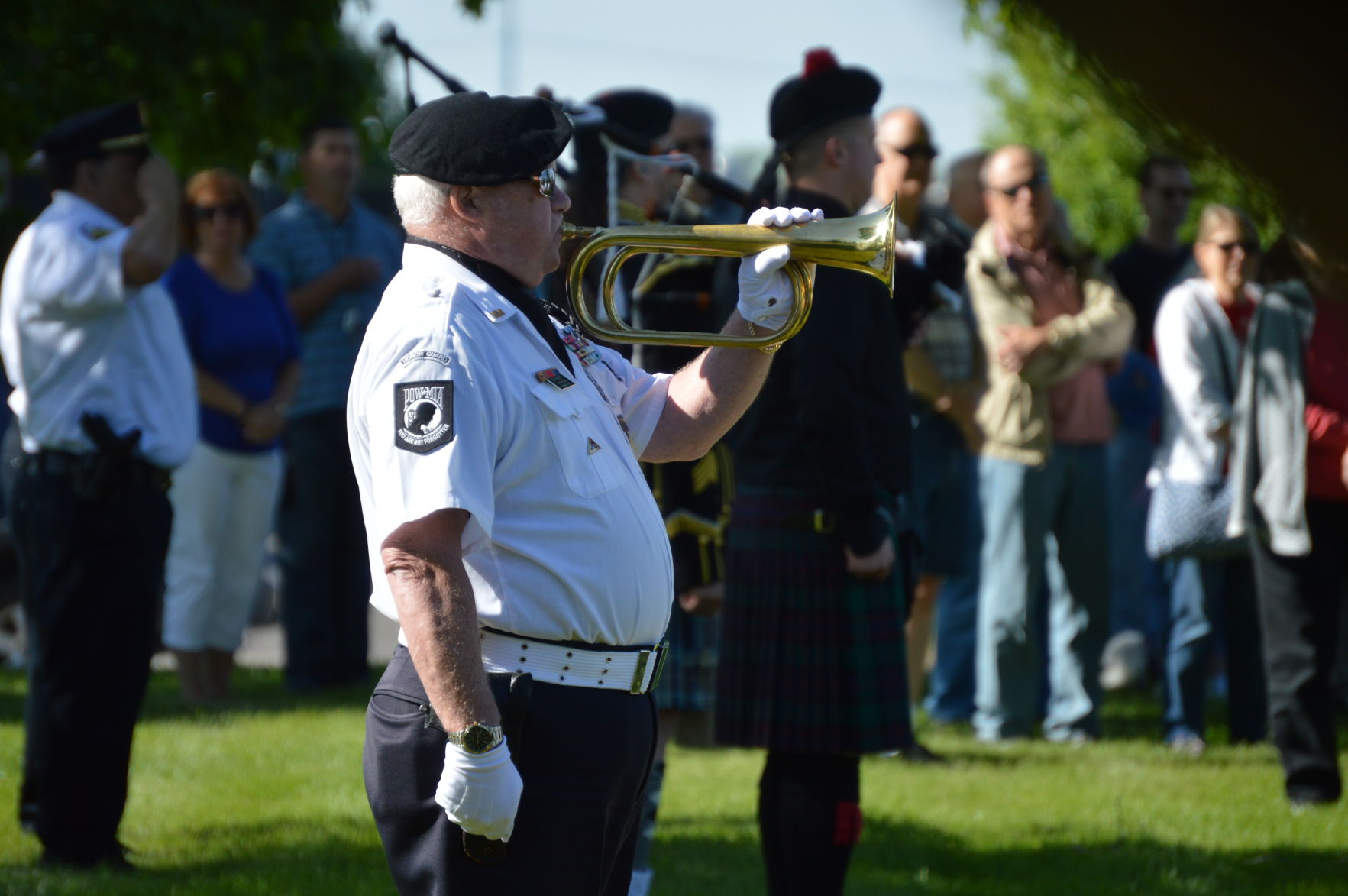 Strongsville VFW Honor Guard member Don Kennett plays “Taps” on the bugle during the ceremony as attendees watch in silence. 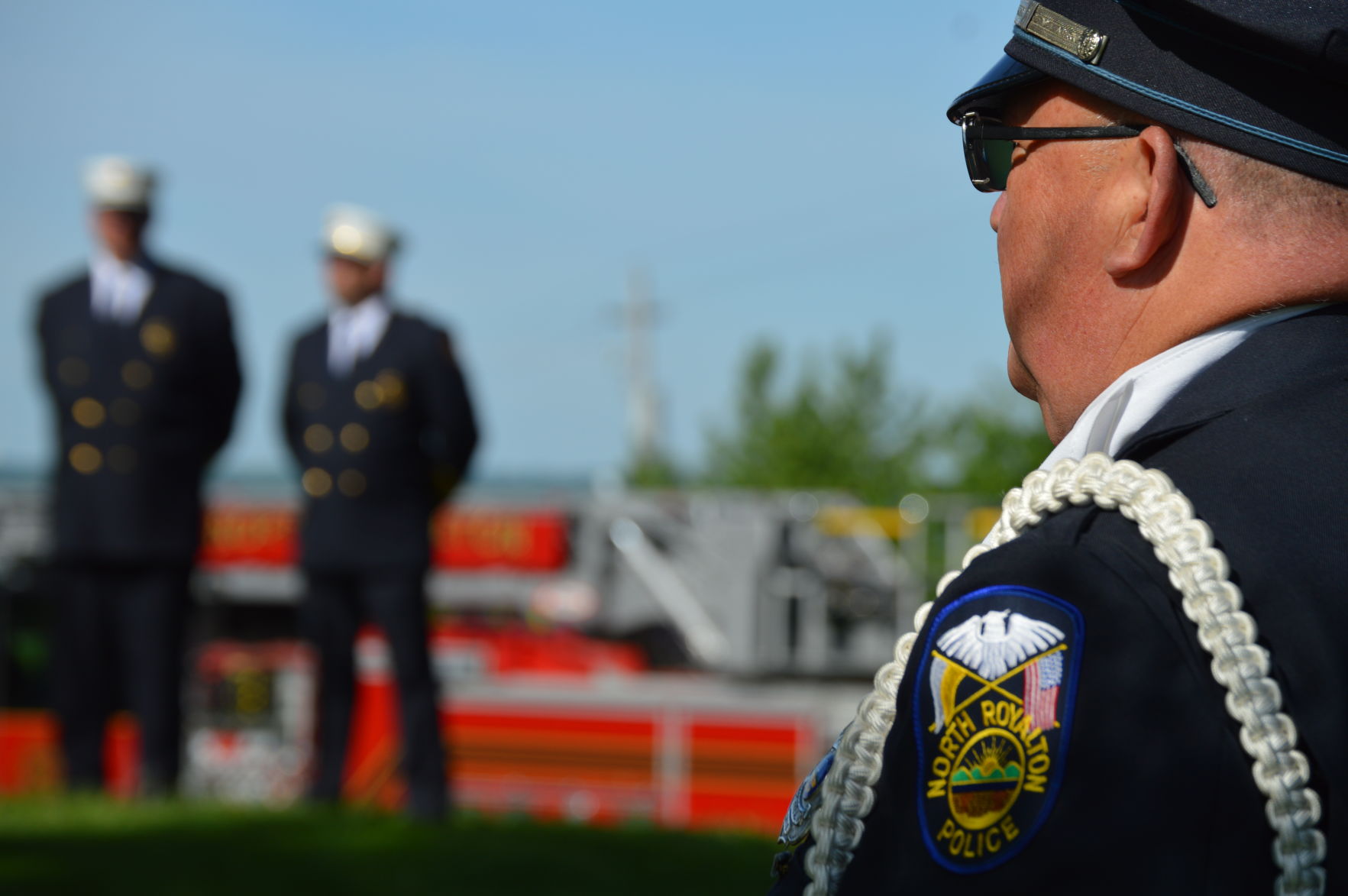 School Resources Officer Jon Karl, right, stands at attention while Assistant Fire Chief Tom Habak and Fire Chief Bob Chegan do likewise in the background, remembering the many before them who have donned a uniform in service to their fellow man. 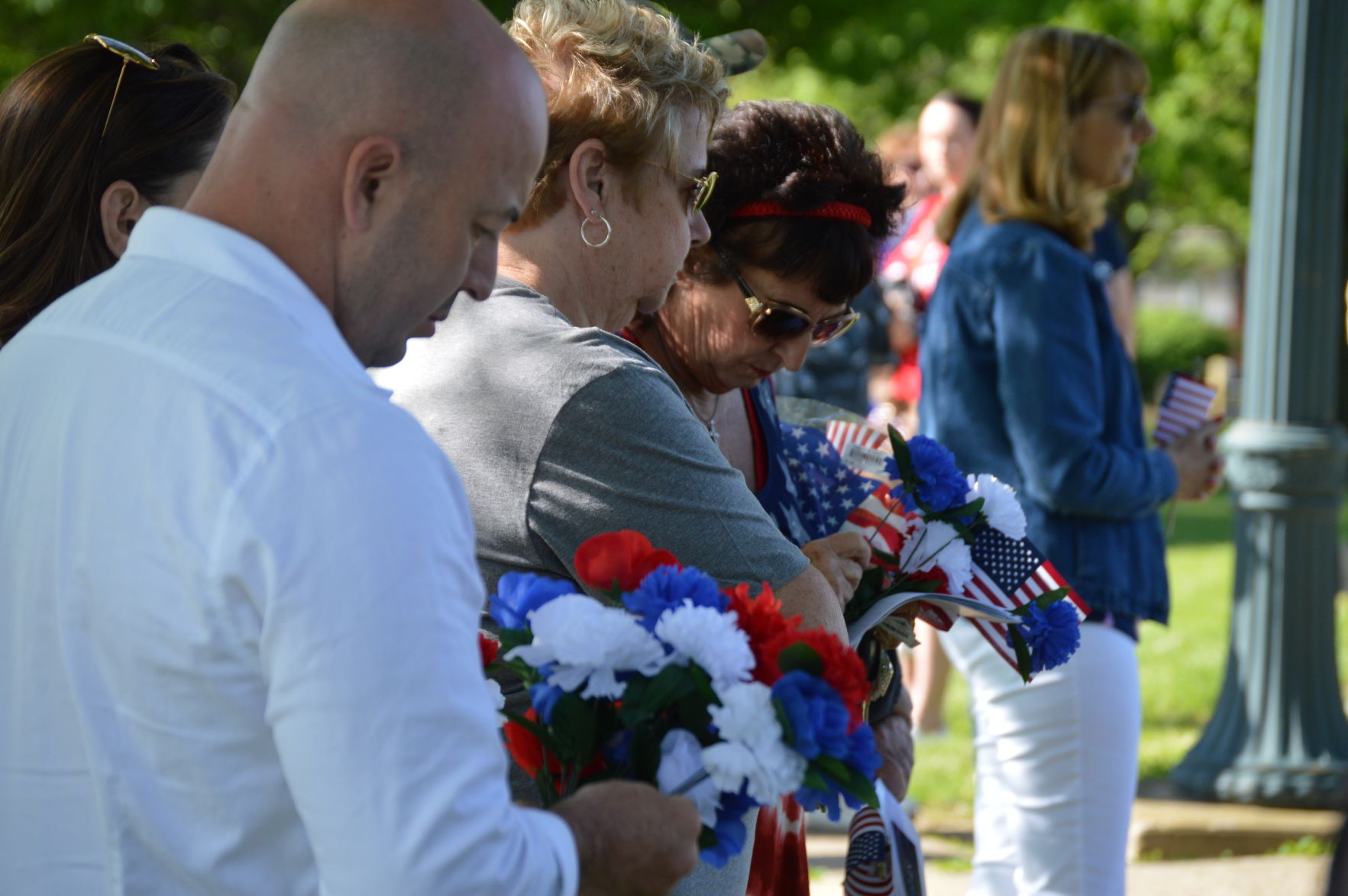 Dozens of residents gathered to remember those who have served their country at the Cpl. Jeffrey Boskovitch Memorial at the City Green. The memorial pays tribute to Boskovitch and all the fallen comrades who made the ultimate sacrifice serving this nation.
PREVIOUS IMAGE


NORTH ROYALTON – As Fred DeAnne waited for the Memorial Day ceremony to begin, he reflected on what this somber holiday means to him as a Marine veteran of the Korean War.

“It’s a freedom day that a lot of my buddies died for in the service,” the North Royalton resident said. “They gave their lives for us to have this here.”

Like DeAnne, many of those in attendance had loved ones and friends on their minds.

“This is the first Memorial Day without Dad,” Ward 1 Councilman John Nickell said, thinking of his father Gene who served in World War II with the Marines. “So he’ll be on my mind today.”

Jane, of Strongsville, was also thinking of her father.

“I attend in honor of my father who served in WWII and in memory of classmates who served in Vietnam and to honor those currently serving,” she said.

“We’re here today to honor our heroes, to remember their achievements, their courage and their dedication, and to say thank you for their sacrifices,” he said. “Thinking of the heroes who join us in this group today, and those who are here only in spirit, a person can’t help but feel awed by the enormity of what we encounter.”

He welcomed the Strongsville VFW Post 3345 honor guard, auxiliary and members in attendance to post the colors, conduct a 21-gun salute alongside the North Royalton Police honor guard, and Post Commander Tim Zvoncheck, who shared a bit about the national observance.

He said General George S. Patton encapsulated the true meaning of the holiday in 1944 during an address the general gave as he looked across a vast field of white crosses and Stars of David, marking the graves of men who just days before had been part of his army.

“General Patton said, ‘It is foolish and wrong to mourn the men who died … rather we should thank God that such men lived,’” Zvoncheck said. “That is what today is all about, to be thankful that such brave men and women have lived and to pay tribute to those heroic patriots who bravely rose up and fought for something greater than themselves, protecting a home to which they never returned.”

Zvoncheck said flowers, memorials, flags at half staff and the sad notes of ‘Taps’, as meaningful as they are, are not enough, that what everyone should do is honor these sacrifices by living what these men and women died for.

“Live the America they died for, a country of freedom, equality, opportunity and unlimited promise,” he said. “Live filled with hope, hope that what they gave us will last forever and that freedom and opportunity will find all who seek it and all who respect it.”

Following the ceremony at the cemetery, the crowd moved to the Cpl. Jeffrey Boskovitch Memorial at the City Green. The memorial pays tribute to Boskovitch and all the fallen comrades who made the ultimate sacrifice serving this country.

Wally Ohler, a Vietnam vet and the city’s veterans’ liaison, led this ceremony which honors all the local fallen heroes, reading their names aloud as members of the crowd placed a flower on the memorial for each soldier.

After the event, Ohler looked at the list of names he had just read overcome with emotion.