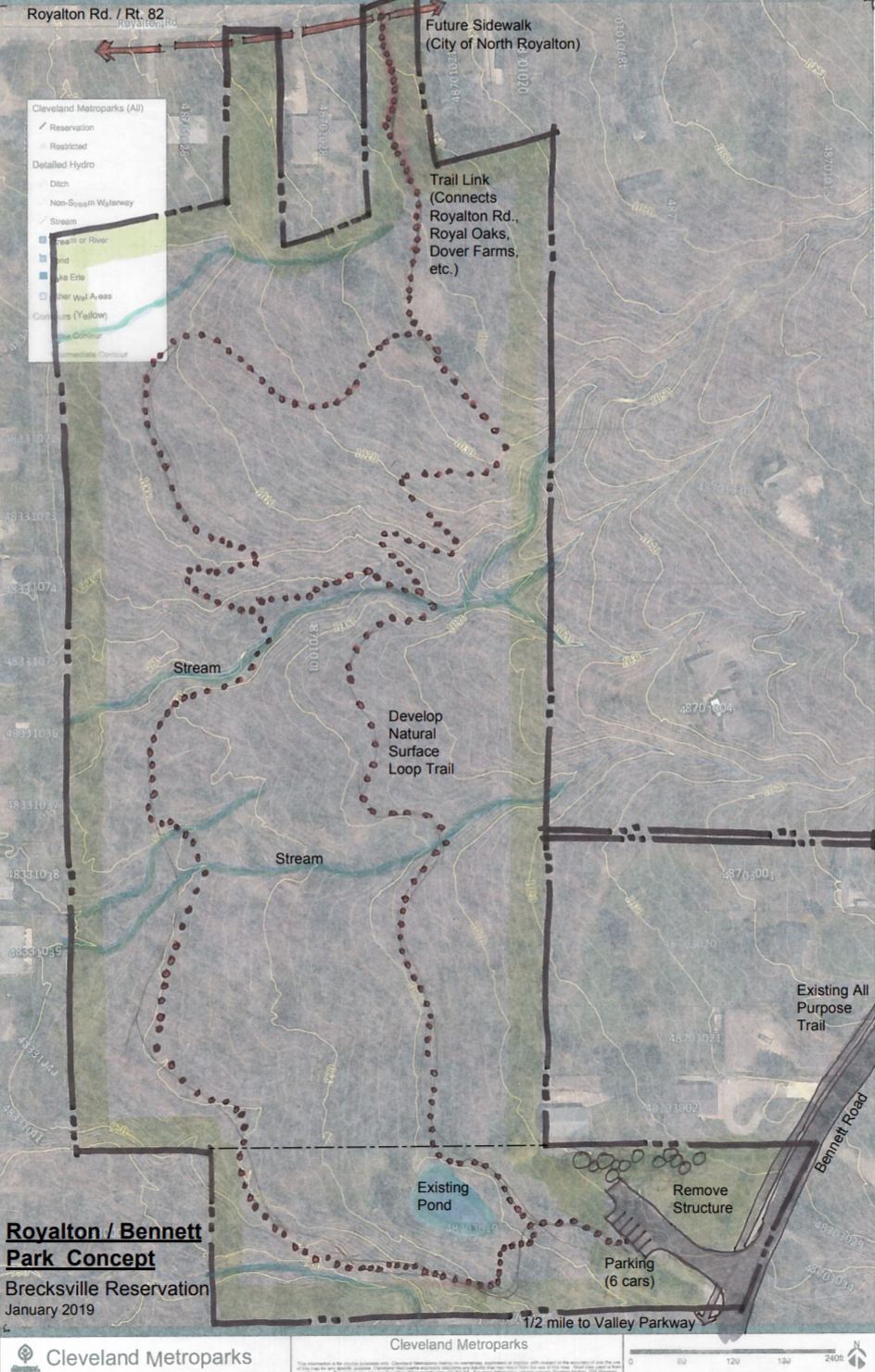 This conceptual rendering shows preliminary plans for Elek Springs, which includes an entrance from Bennett Road opening to a natural surface trail that loops the entire property and up to Royalton Road to the north. Rendering courtesy of the CLEVELAND METROPARKS 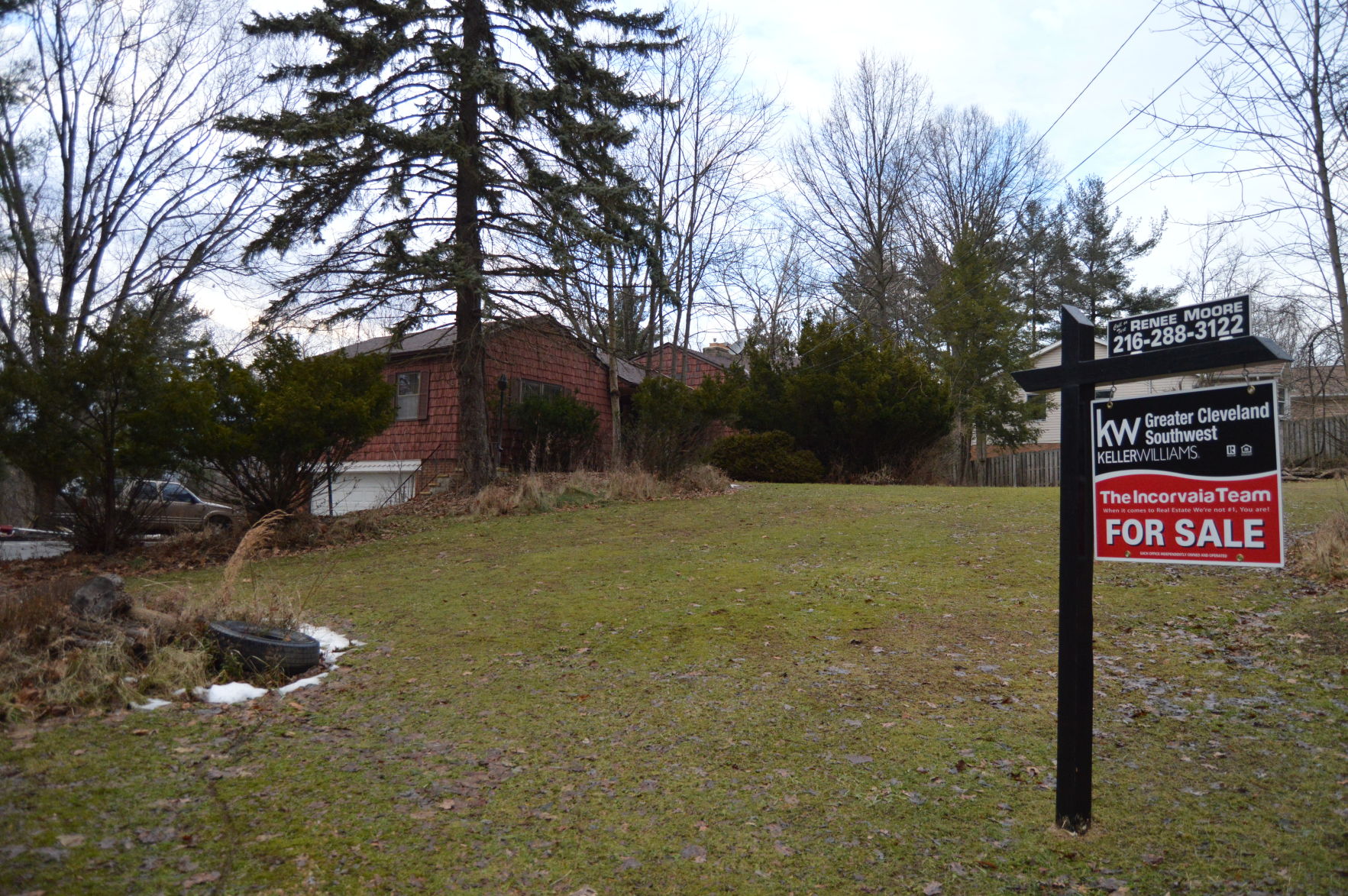 The Cleveland Metroparks is purchasing this Bennett Road property which will allow it to tie this land and the adjacent Elek Springs property into the Brecksville Reservation and Valley Parkway. Photo by JAIME ANTON
PREVIOUS IMAGE


NORTH ROYALTON – For over a decade, the city has been working behind the scenes to tie the 14.8-acre Elek Springs property into the Cleveland Metroparks park system.

With the addition of the trail along Bennett Road when the roadway was resurfaced a few years ago and the continuation of that trail from North Akins south to the Valley Parkway later this year, it all came down to the right property coming available along Bennett to ultimately tie Elek Springs into the Brecksville Reservation and Valley Parkway.

That day has finally come.

The Metroparks is purchasing the home at 14702 Bennett Road and is expected to close on the property March 20. It’s a 3.1-acre site that includes a pond and lies adjacent to Elek Springs, located on state Route 82 just west of Bennett. At one point, Elek Springs was in danger of being developed into residential housing, but the city purchased it in 2008 with an expiring state grant to preserve the land for future park use.

Mayor Bob Stefanik said over the years the city has had discussions with the Metroparks about possibilities for Elek Springs.

“Eight years ago, we had the parks walk through the property and we had the thought of tying it in then, they just needed the right property on Bennett to come available. And the right one finally came up for sale, so it’s been a work in progress all these years. A lot of pieces of the puzzle had to be put together, but we are finally at that point,” he said.

Before city council is legislation on second reading to transfer ownership and management of Elek Springs to the Cleveland Metroparks. The Metroparks would complete park improvements to the site and maintain and preserve it into the future, city officials said, a similar arrangement between the city and Metroparks at Aukerman Park.

“It was always meant to be park land, and now we are turning its future over the Metorparks,” North Royalton Community Development Director Tom Jordan said of Elek Springs.

An informational meeting is planned 7 p.m. Feb. 12 at City Hall, at 14600 State Road, in council chambers for the general public and surrounding homeowners to learn more about proposed plans for the property from the Metroparks and city officials.

Early conceptual plans include razing the Bennett home. This area would then become the park entrance, opening to a natural surface trail that loops the entire Elek Springs property up to Royalton Road and back. The hope is to tie the trail into future sidewalks along Royalton Road.

“We look forward to working with the city of North Royalton to create additional greenspace and connectivity for the local community to Brecksville Reservation and Valley Parkway. In addition, the acquisition of these properties will allow for the protection of streams and forests in the Rocky River watershed,” said Kyle Baker, Cleveland Metroparks director of real estate.

This is yet another recreational option residents will have when it comes to taking in the community’s natural beauty.

Stefanik said when he became mayor, he, his administration and council made a commitment to significantly broaden recreational opportunities within the community.

Over the past 11 years, the city has made good on its word with the addition of the North Royalton Family YMCA, the installation of the Chippewa Creek Wetland Trail adjacent to the YMCA, the addition of ball fields, wetland preservation on Bennett Road that includes the conservation of a heron rookery, the purchase and creation of Aukerman Park with the Metroparks and now plans to transform Elek Springs.

The Metroparks also partnered with North Royalton, Broadview Heights and Brecksville to complete the 6-mile gap in the all-purpose trail, which opened a few months ago.