‘It feels wonderful’
Ruling ends decades behind bars, but he’s not quite freeCourt of Criminal Appeals must now agree with judge; DA may opt to seek retrial 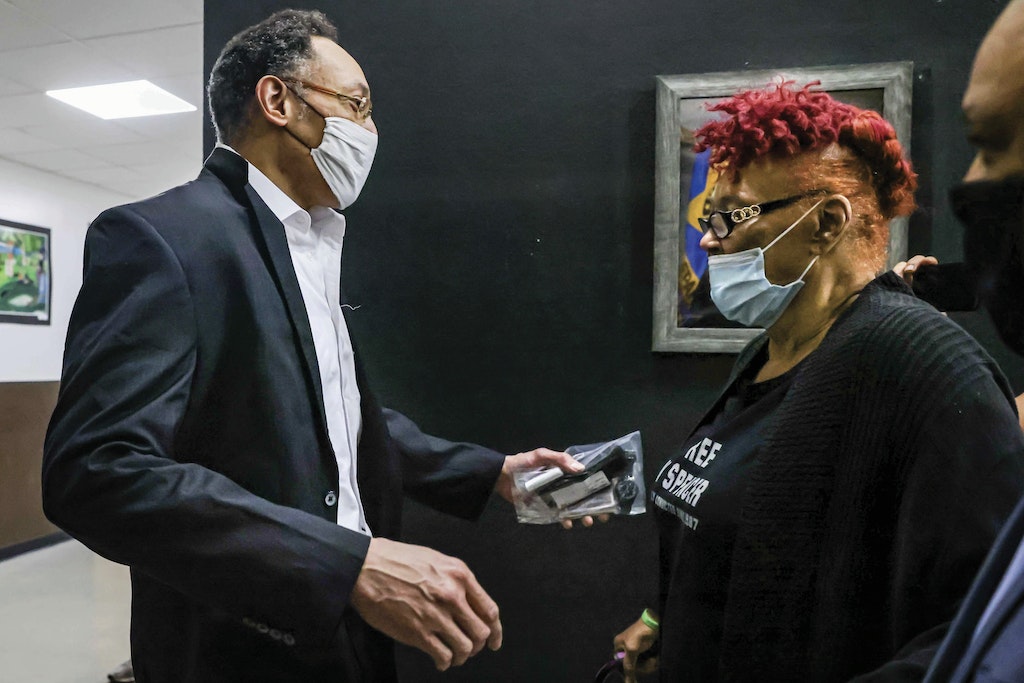 “It feels great,” Ben Spencer said after hugging his mother, Lucille Spencer. “I’m thankful to finally have made it to this point in my life.” Spencer spent 34 years behind bars before a judge ruled on Friday that his trial was unfair after revelations of lies and withheld evidence. (Lola Gomez/Staff Photographer)
PREVIOUS IMAGE

It’s been 34 years since Ben Spencer went home to his wife, Debra.

Back then, she didn’t own the three-bedroom home in Cedar Hill where her walls are decorated with photos of him and their son, Ben Jr. She bought the house while he was in prison for a 1987 deadly robbery that he’s always said he didn’t have anything to do with.

Still, he felt at home when he walked in Friday night after a judge released him from the Dallas County jail. The judge ruled his trial was unfair because of revelations that witnesses lied and prosecutors withheld evidence.

But he’s not quite free. The highest criminal court in Texas must agree with the judge, and Dallas County District Attorney John Creuzot hasn’t decided whether to try him again.

There’s no DNA or fingerprint evidence, but prosecutors and state Judge Lela Mays aren’t ready to say Spencer is innocent. Spencer’s defense team is still fighting to prove it.

He will live with Debra Spencer while he waits. She never stopped supporting him, even though they divorced while he was in prison.

“I’m looking forward to this moment of getting to reconnect with my family and trying to reacclimate myself into freedom,” Spencer said. His son was born after he was arrested.

He has a queen-size bed and a closet full of clothes provided by supporters. About a dozen packages were piled in a corner, gifts from friends for his homecoming.

“It’s beats Coffield,” Spencer said, referring to the prison unit in Tennesee Colony, southeast of Dallas, where he spent much of his sentence. “I’m ecstatic to be free and sleep in a regular bed. I’ve been sleeping on a bunk for all these years.”

Just hours earlier, at 5 p.m. Friday, dozens of supporters packed the jail lobby waiting for Spencer to turn the corner. At the end of a hallway, Debra Spencer waited for him along with his lawyers, their cellphones recording his first walk of freedom.

Debra Spencer couldn’t wait for him to reach her. She waved her hands and ran to him. They came around the corner arm in arm and shared a group hug with their son, who turns 34 in May.

Supporters cheered as his 82-year-old mother, Lucille Spencer, slowly walked to her son.

“It feels wonderful. It feels great,” he said after hugging his mother. “I’m thankful to finally have made it to this point in my life.”

There were no tears, just smiles. Big ones.

Lucille Spencer said she won’t feel closure until the case ends with his vindication.

“I’m still struggling, and I’ll struggle along with him until he’s fully free,” she said.

There were times Lucille Spencer was afraid she wouldn’t live to see his release. Last year, she got COVID-19, and she says she still feels lingering symptoms and her body is weaker.

Judge Mays ordered his release Friday and granted a personal recognizance bond after prosecutors said they supported it. Spencer was serving a life sentence. The judge reiterated Friday at a hearing that she was not exonerating Spencer, only releasing him from jail.

Young’s family has declined to comment but has previously said they believe Spencer is guilty.

Spencer appeared in the courtroom flanked by his attorneys, Cheryl Wattley and Gary Udashen. They told the judge Spencer would have the support of his mother, ex-wife and son, and others after his release. His family members were the only spectators allowed in the courtroom because of COVID-19 restrictions. The judge, Creuzot and the head of his conviction integrity unit, Cynthia Garza, appeared via video.

“I just want to thank you,” Spencer said in court from behind a blue mask to the judge and apologized for any inconvenience.

Wattley, who has represented Spencer for 20 years, walked out of the courtroom in tears and her hands shook.

“The 26th would be his 34th anniversary. Thank God that will not be an anniversary that he will celebrate in prison,” Wattley said.

At the center of the prosecution’s case was Gladys Oliver. She testified repeatedly that she saw Spencer and another man, Nathan Robert Mitchell, get out of Young’s car in the street outside her house. Young’s body was found badly beaten in the street. He later died in a hospital.

Spencer’s first trial in 1987 resulted in a murder conviction. It was later overturned because Oliver didn’t disclose that she had received $580 from Crime Stoppers.

At the second trial, Oliver admitted to receiving the Crime Stoppers reward but no other money. She also reiterated her testimony at a 2007 hearing. Another judge found Spencer innocent in 2008, but the Court of Criminal Appeals disagreed, in part, because the district attorney at the time did not believe in Spencer’s innocence. Spencer remained behind bars.

Then, in 2010, prosecutors under a prior district attorney met with Oliver and said she admitted receiving between $5,000 and $10,000, which they were able to corroborate with other witnesses, according to the judge’s findings.

Mays signed a joint filing from prosecutors and defense lawyers Wednesday agreeing that Oliver’s testimony was critical to Spencer’s conviction.

Oliver also pointed police to two other witnesses who incriminated Spencer. One is now dead, and the other has changed his account of what happened that night.

Udashen and Wattley, Spencer’s attorneys, say in court records that witnesses who testified — Jimmie Cotton, who initially said he saw Spencer the night of the slaying, and Danny Edwards, who said he overheard Spencer admitting to the crime while they shared a Dallas County jail cell — admitted lying to jurors.

If Texas’ Court of Criminal Appeals agrees Spencer was wrongly convicted, prosecutors could retry Spencer, dismiss the case or agree to his claim of actual innocence. There is no timetable for when the higher court could rule.

Spencer’s attorneys also point to new scientific evidence that they say proves that witnesses who claim to have seen Spencer on the night of the slaying could not have identified him as the killer because they were too far away.

On Friday, Creuzot didn’t rule out trying Spencer again, but he also seemed to comfort Lucille Spencer, hugging her and telling her to “hang in there” while she waited for her son’s release.

“It doesn’t mean he’s innocent, but we are continuing to investigate the actual innocence claim,” Creuzot said later. “There’s really not much left as far as evidence is concerned. But we’ll keep looking. And the other thing, too, is we have an open mind to that somebody else did this.”