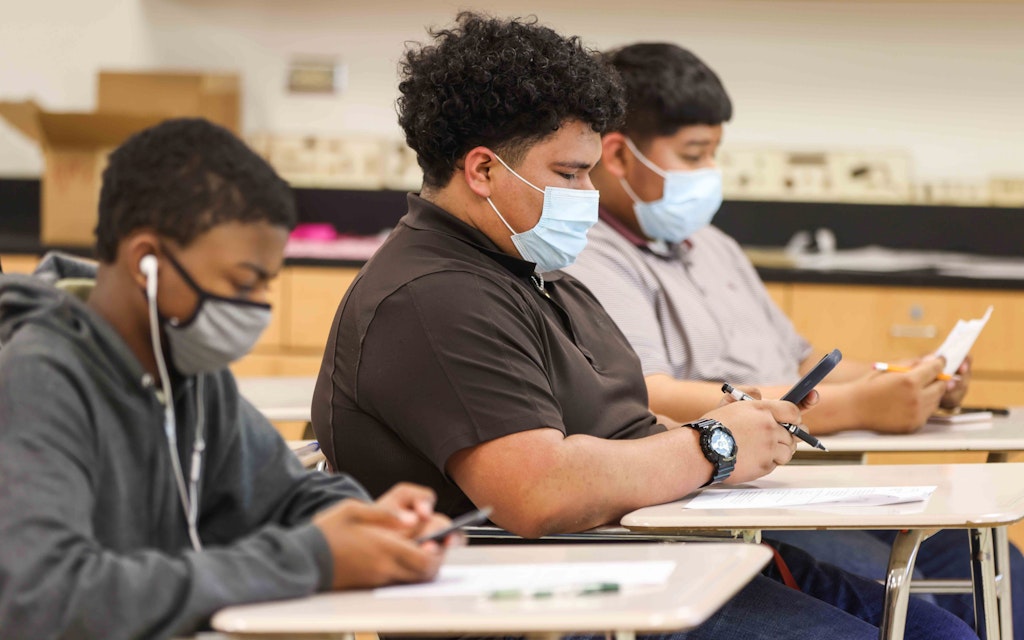 Most Palestine students were missing a device or internet connection — sometimes both — at home when remote learning began last spring.

The rural district about two hours southeast of Dallas didn’t have many options to keep instruction going remotely during the pandemic as about 6 out of 10 children lacked the digital tools needed.

“Quite frankly, we could not provide an online, digital curriculum if we had wanted to,” Superintendent Jason Marshall said. “We did pencil and paper.”

Even after Palestine ISD eventually acquired more devices, about 500 of the district’s 3,500 hot spots still didn’t work because of spotty coverage in students’ homes. By Thanksgiving, many frustrated families participating in online schooling requested to go back to paper and pencil.

Palestine students are far from alone in their struggles to find stable internet connection. About 1 million Texans don’t have home access to broadband, a state report found last summer.

The pandemic made Texas’ already gaping digital divide much more challenging, which had lawmakers pledging to close that gap. Gov. Greg Abbott named expanding broadband access one of his priority items at the beginning of session, and last week two omnibus bills gained traction when they each were unanimously voted out of their House and Senate committees.

No one spoke against either bill, and lawmakers from both parties have signed on as co-authors, indicating the push to expand broadband is likely to receive widespread support as it moves forward.

The bills — if approved — would establish a broadband office to spearhead the charge to improve access; create and publish maps detailing which areas lack access to broadband; establish a broadband development program to distribute grants and financial incentives for improved access; and create a statewide plan with long-term goals.

Advocates argue some of these changes are essential to closing the digital divide. Texas is one of six states without a statewide plan and among a small group that doesn’t have a state agency or office steering larger efforts.

The reasons so many Texans don’t have internet access is varied within each community.

It isn’t just a rural issue, noted Bill Sproull, the CEO of the Richardson Chamber of Commerce and the chair of the Governor’s Broadband Development Council.

About 15% of households in metropolitan areas don’t have access to broadband data plans, he said, and the problem can’t just be solved with infrastructure. Families also struggle with affordability and gaps in digital literacy.

The two bills’ approaches to solving these problems are mostly similar but differ in small ways. The Senate’s version, for example, puts the broadband office under the University of Texas System while the House would locate the office under the comptroller.

Senate Bill 5 also gives oversight to an 11-member advisory committee that would include representatives from rural areas, urban areas, the Rio Grande Valley, the telehealth medicine industry, public education, the Office of Economic Development and Tourism, nonprofits focused on broadband connectivity, the UT System and Texas Tech University. The office established by HB5 would be overseen by the comptroller’s office.

It’s important to include “regular people” in the discussion process for these plans, said Josephine López Paul, the lead organizer for Dallas Area Interfaith, a coalition of congregations, schools and nonprofits.

López Paul, who helps organize advocates around issues in their Dallas County communities, has noticed that many are still grappling with the same internet challenges as they were at the start of the pandemic.

Families often have to negotiate how to use their few devices available — can students use their tablets for class only or can parents use it for work? And some families don’t have the digital skills to log on in the first place.

“They need to do some bottom-up listening and not just assume they have a plan that’s going to work with people,” López Paul said. “They can put broadband structures in areas and if people don’t know that it’s there or that they need it … it’s just going to be a wasted effort.”

In recent hearings that drew overwhelmingly positive feedback from nonprofit advocates, school leaders and internet service providers, one lawmaker emphasized the bills aren’t a foolproof solution on their own.

Many areas lack internet infrastructure because commercial providers don’t find it lucrative to build it, Sen. Charles Perry, R-Lubbock, said. He described the spots where providers haven’t invested as the hole in the middle of a doughnut that needs to be filled.

“What is it going to take for industry … to say this is worth the cost?” Perry asked. Without support from internet providers, the state can’t make a big difference in improving access, he added.