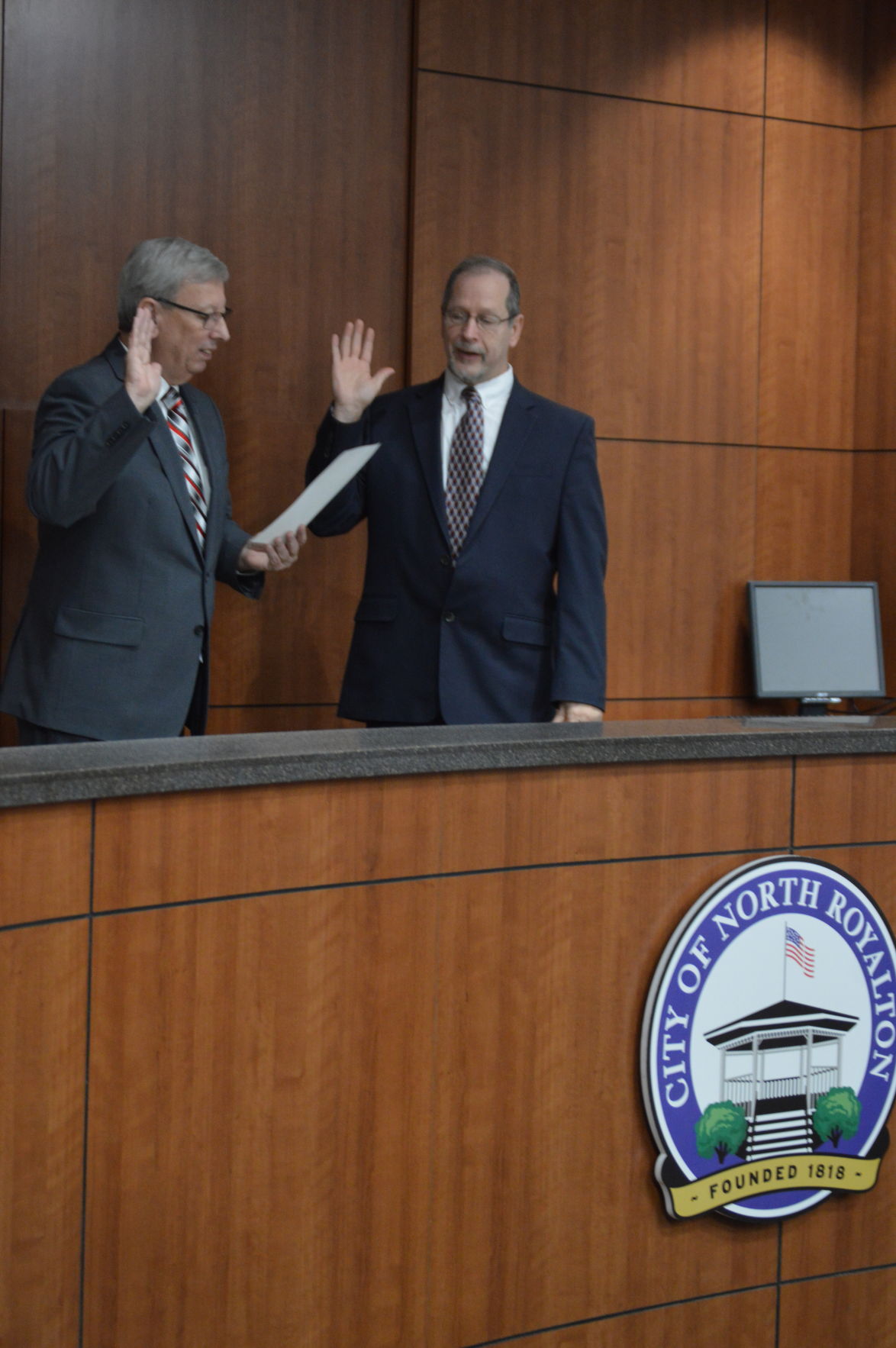 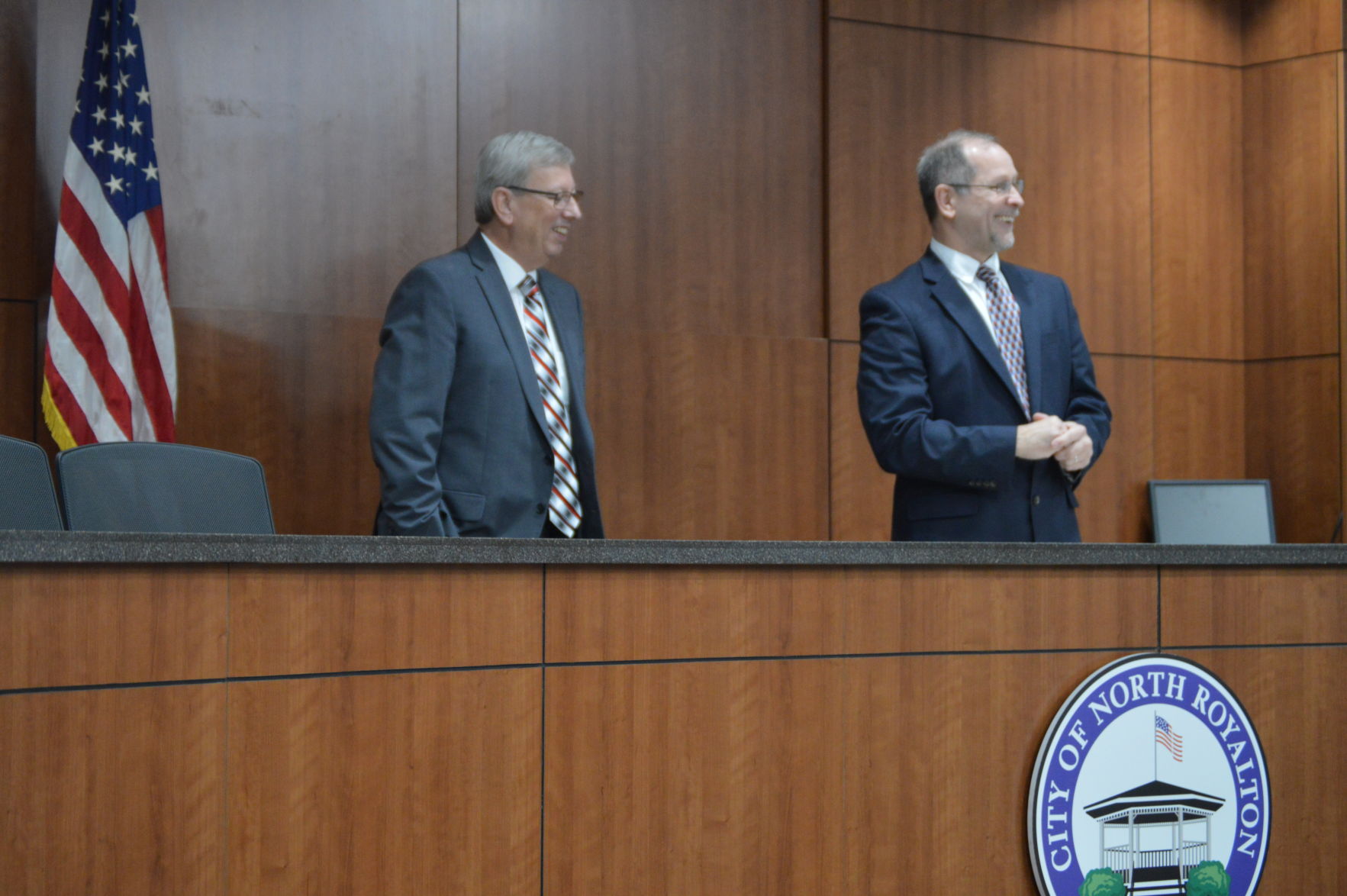 Mayor Larry Antoskiewicz (right) addresses an audience of family, friends and city employees after being sworn in by outgoing Mayor Bob Stefanik. 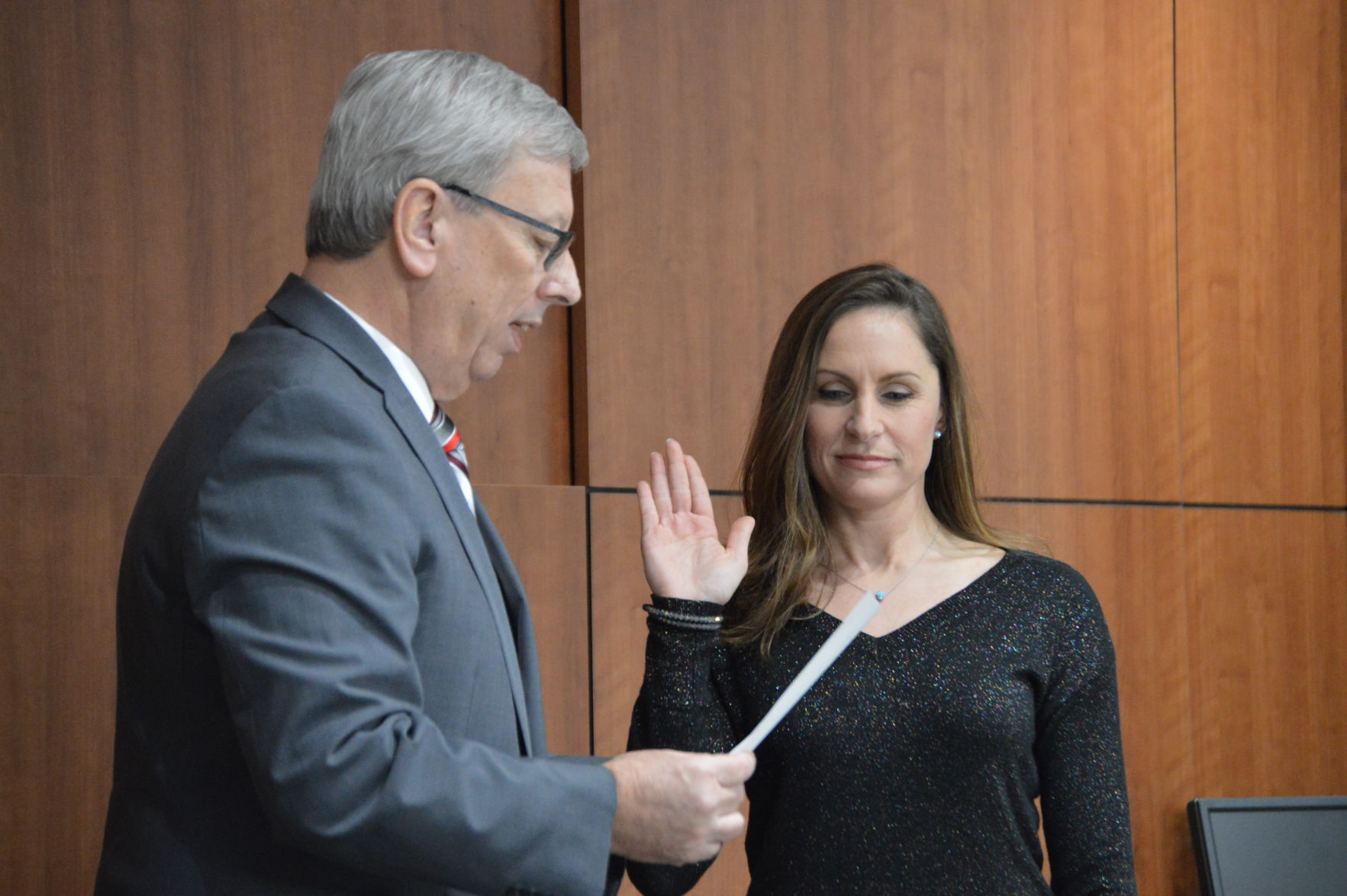 At a ceremony in City Council Chambers, Mayor Larry Antoskiewicz was formally sworn in by outgoing Mayor Bob Stefanik, who handed over the reins after serving 12 years as mayor.

A great deal of time was spent after the election Nov. 5 ensuring there would be a seamless transfer between mayors, Antoskiewicz said. Finalizing the city’s budget is the first priority, which will be the new City Council’s first major task. The mayor said his focus, too, in the next few months will be plotting his course with department heads as well pinpointing new and future projects.

“I’m excited to be getting started. We’ve been left with a solid foundation, and I want to continue to build on this but also prioritize some of the changing needs of the city,” Antoskiewicz said. “The priorities are different than they were 12 or even five years ago. So, we will be identifying those areas and making the necessary changes moving forward.”

Ongoing efforts to establish rapport with her ward and being accessible and responsive will be Fenos’ continued focus in the coming year.

“My role as a planning commission member the past three years has been helpful in preparing me to take on this new role. For the past few weeks, I feel as if we were in limbo transitioning, but now that is behind us, and I am happy to finally be in a position to officially begin addressing the needs of my constituents and the city as a whole. It does come with a unique set of challenges, balancing the individual needs of residents with the overall needs of the community, but I am ready to listen and tackle issues to the best of my ability,” she said.

Barath said this new journey couldn’t begin soon enough for her, and she is ready to hit the ground running.

“The residents and business owners have a voice, and I am anxious to hear from them and ascertain what issues need to be elevated. The challenge of learning the laws, policies and procedures of how our city works is daunting, but I accept the challenge. I can’t promise that all issues that cross my path will be fixed, but that won’t be for a lack of trying,” Barath said. “The next two years will be fun, and I invite the residents of our city to take this journey with myself, all other council persons and our new mayor to make our city a wonderful place to live.”

Dietrich said he too was ready to be sworn in and get to work. Continuing the lines of open communication will be one of his main priorities.

“I am looking forward to working with the new mayor and council on current issues and new ideas for the city. We really do have a great group of people, and I feel we can get a lot accomplished. I am looking forward to getting assigned to my committees, so I can focus in on those specific needs,” he said. “I feel it’s important to have an open line of communication, and I want my residents to know that they can contact me any time.”

Weimer said he does not take this role lightly.

“I am excited to get started working for the residents of Ward 5. I don’t take their decision to elect me lightly and will be looking for their voice in all of the decisions to come. I am also excited to work with this great group of people to continue moving North Royalton forward,” Weimer said.

Wos said he is looking forward to becoming an active participant in local government as opposed to sitting on the sidelines and observing the meetings as he has been for quite some time.

“I’ve already started to dig into the new legislation awaiting the new council as well as learning about the operation of the local government. I plan to hit the ground running for 2020, and I encourage Ward 6 residents to get in touch with me with any questions or concerns or if they just want to say hello at ward6@northroyalton.org,” he said.

As the sole returning members, Marnecheck and Langshaw will undoubtedly be providing guidance in the coming year.

“Running citywide, I got to know all of the candidates, and I am really impressed by their passion,” Marnecheck said. “The long wait and anticipation is over, and now, we get to dig in and accomplish things and continue to put residents first.”

“As the most veteran ward council representative, I look forward to working with my new colleagues in tackling the various issues we campaigned on and introducing new legislation or new policies in the coming months that will achieve that,” Langshaw added.