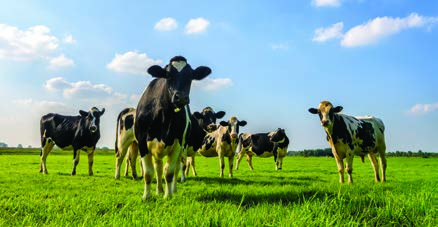 University of Guelph researchers are trying to identify dairy cows that are tolerant to heat while maintaining economically-important traits such as milk production.
PHOTO: SJO/ISTOCK/GETTY IMAGES
PREVIOUS IMAGE

A research team from the Department of Animal Biosciences recently investigated the association of milk production traits with weather data to identify heat-tolerant cows.

“The dairy industry takes at least $44.6 million in economic losses each year due to decrease in milk production from heat stress,” says University of Guelph professor Flavio Schenkel.

The researchers calculated the temperature-humidity index (THI) that combines ambient temperature and relative humidity which are key variables for an animal to be able to dissipate heat.

“When we looked at the THI and milk production, we could identify at which point on the THI temperature emitted scale when production would start to decline,” says PhD student Ivan Campos.

With that information they could define the THI thresholds for new production traits, looking at milk, fat and protein yield.

Researchers found that in general, cows with higher milk production were more affected by heat stress.

“You have all of the physiological mechanisms directed to produce milk in the cows, and there’s just a little for the thermoregulation,” says Campos.

The findings varied by region because humidity plays an important role.

“A value of 70 to 72 on the THI is not a specific temperature because it depends on the humidity. It could be 23 C, and you have already hit heat stress if it’s very humid. But it could be 27 C and it’s very dry, it’s different.

The dissipation of heat depends on the humidity,” says Schenkel.

Before the findings can be brought into the dairy industry, more research is needed to better understand how to select animals simultaneously for high milk production and heat tolerance.

“We need to understand how selecting for heat tolerance can affect other production traits, especially with those already implemented in the industry within the selection indexes,” says Campos.

Initial research showed that some cattle are high producers and also tolerant to heat stress.

“We need to put the research results out, to generate enough interest and demand from dairy farmers to continue the research towards implementation, which would focus on how to account for the relationship between heat tolerance and the many other economically important traits included in the current selection indexes, so that we could jointly select the traits to the direction that we like – more productive animals, but also those that are resilient,” says Schenkel.

But getting results and implementing a practice to select these animals will take time, added Campos.

“It’s not a simple task. It’s a complex situation because it involves other physiological or biological aspects that we need to be aware of before starting to select animals that are able to cope with heat. We need to look at the whole big picture and not just one small part.”