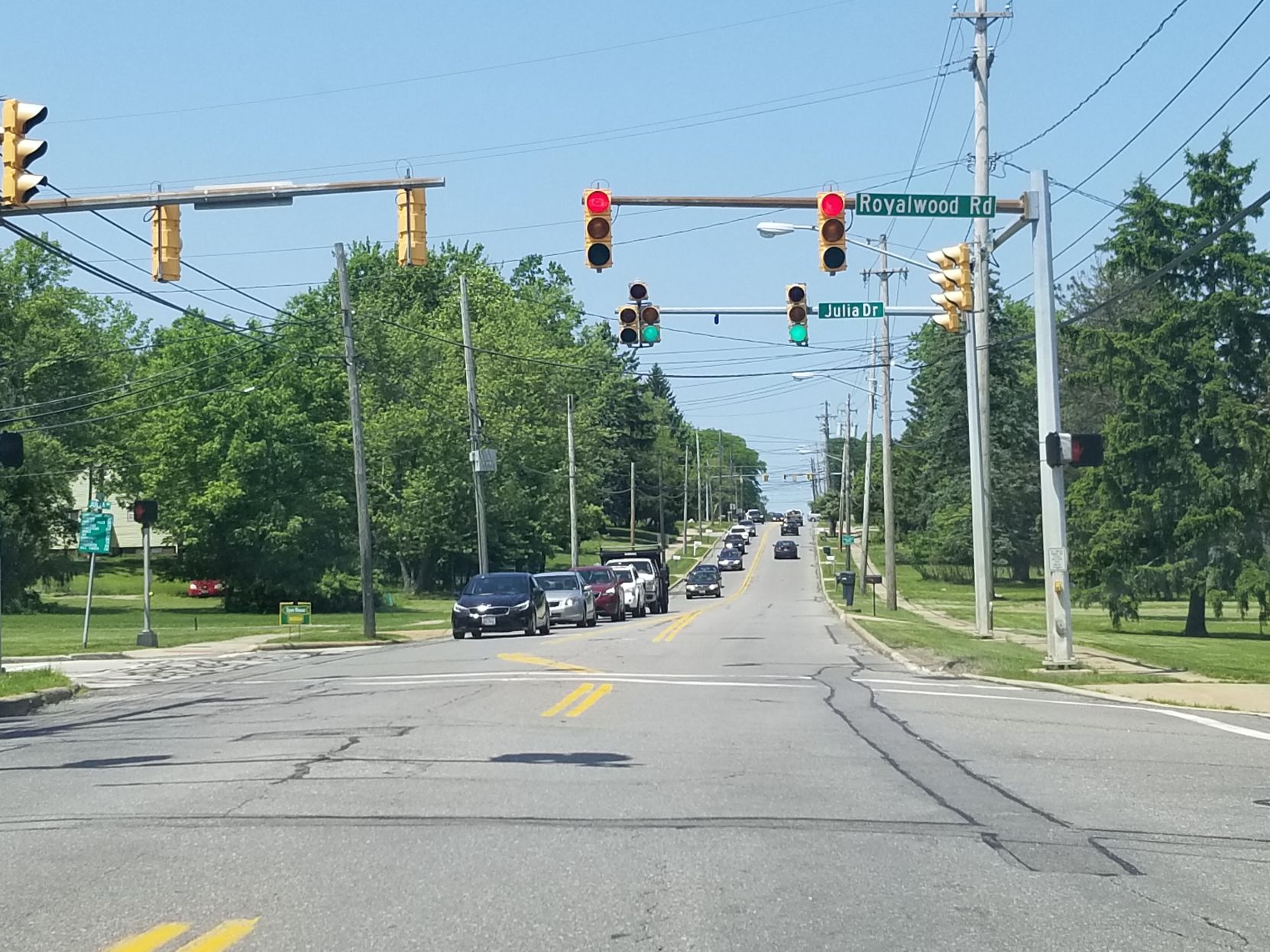 The city will not only have the Northeast Ohio Areawide Coordinating Agency study the intersection of York and Albion but also Royalwood/Ridge/Julia, seen here, and Ridge/Akins to determine if there is a problem with congestion that warrants addressing. Photo by JAIME ANTON
PREVIOUS IMAGE


NORTH ROYALTON – City Council discussion regarding congestion at York and Albion roads the past few months, has gained speed and now has council discussing two other intersections with a traffic study to be performed on all three.

Back in March, council began questioning whether or not the York/Albion intersection needs to be altered to ease some of the back-ups experienced at certain times of the day.

Planning Commission member Jessica Fenos, who lives off York in Ward 1 and is a candidate for that open council seat, first spoke on the issue then during the safety meeting, concerned from a safety standpoint with the fire station nearby, and council carried this discussion into April.

Ward 1 Councilman John Nickell, who is running for mayor, said he believed in-depth review and possible funding is required to address this and other intersections like it such as Royalwood and Ridge, West 130th and Whitney, and Wallings and State.

Believing that traffic will ease in a few years with the addition of the new elementary school and the completion of the widening of both Royalton Road and Sprague Road, Council President Larry Antoskiewicz, who is also running for mayor, suggested, during the April discussion, taking a more cost-effective approach in the short term by possibly altering and updating the traffic light’s programming to include a turning arrow, and then making a determination once the road and school projects are completed in the future.

And last month, Mayor Bob Stefanik and Community Development Director Tom Jordan suggested a free traffic study through the Northeast Ohio Areawide Coordinating Agency be performed at not only York/Albion but also Royalwood/Ridge/Julia and the Ridge/Akins intersections, two other known spots of congestion at certain times of the day.

“This would be the first step to see if we qualify for any state or federal funding to help address the situation if warranted, and that’s a big if,” the mayor said. “We would never appropriate funds to address congestion that only takes place a fraction of the day. This traffic study will help us understand if there is truly an issue and if federal and state funding would be available.”

“I think it’s important to have those recommendations before we go out and spend money,” he said.

“For us to do anything, we have to have a traffic study,” he said. “That has been our biggest obstacle. I appreciate the mayor, Council President Larry Antoskiewicz and Community Development Director Tom Jordan for finding a creative way to look at this more with no cost to the taxpayer, which is phenomenal.”

Langshaw said the issue is greater than just congestion, it’s about upgrading infrastructure such as traffic boxes.

“I think this is good because it goes beyond looking at just traffic,” he said.

Nickell said, this week, he is pleased talks have progressed to an in-depth study but said he still feels, ultimately, that congestion won’t be braking anytime soon and will only accelerate.

“The study will tell us how much traffic there is compared to years ago,” he said. “But the fact remains, they are congested constantly at the rush hours and our population is growing not shrinking. People are not pleased.”