Illegal Immigration Is Everyone’s Problem
Local, state leaders far from border states must join call for Congress to act after years of inertia 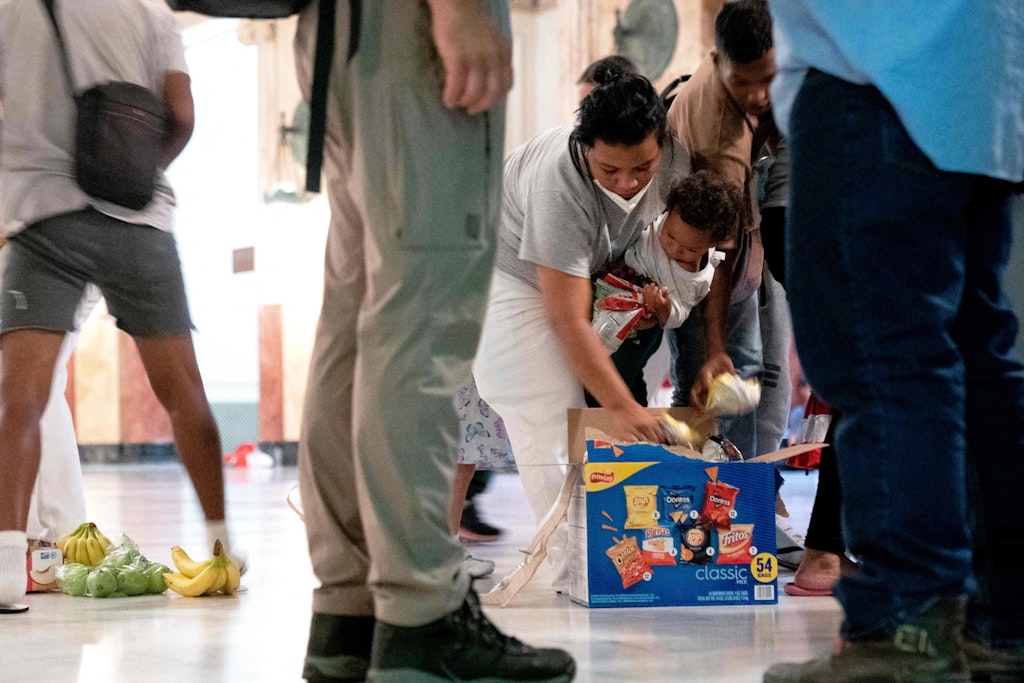 Migrants from Venezuela, who had boarded a bus in Del Rio, collected snacks at a station in Washington, D.C. (Stefani Reynolds/Agence France-Presse)
PREVIOUS IMAGE

We would have loved the opportunity to have been a fly on the wall had New York City Mayor Eric Adams and Washington, D.C., Mayor Muriel Bowser accepted Gov. Greg Abbott’s offer to visit Texas for a firsthand view of border problems.

Abbott’s invitation went out this week shortly after Adams and Bowser publicly asked the Biden administration for help with a surge of asylum-seeking migrants in their cities. The governor’s pointed letter smelled of a political stunt, not unlike his earlier decision to bus migrants to Washington and now to New York, which is why Adams swiftly rejected the invitation and Bowser isn’t packing for a border trip.

Nonetheless, the mayors’ complaints are ironic and telling, and echo the concerns many border communities have voiced for years.

The day that he got the invitation, Adams announced an “emergency procurement” of shelter and other services for people seeking asylum in New York City. He blamed the 4,000 asylum-seekers who have entered the city shelter system since late May for a 10% increase in demand for the city’s homeless services.

The impact of illegal migration is most evident along the border but isn’t just a border issue. Mayors, county leaders and governors are dealing with the consequences of inertia by members of Congress, who prefer to decry border security and immigration problems instead of comprehensively addressing the problems.

Democrats scuttled former President George W. Bush’s immigration reform in 2006, and Republicans did the same to former President Barack Obama in 2009. Former President Donald Trump focused on building a wall and draconian measures to reduce illegal migration. President Joe Biden’s border policy has been mostly a confusing jumble of inconsistent messages to Mexico and Central America that continue to encourage migrants to desperately embark on this dangerous trek northward.

Border security involves more than physical barriers and checkpoints. It means adding manpower to the Border Patrol, overhauling the asylum-seeking process and modernizing immigration courts so that migrants can have their cases reviewed fairly and quickly.

We have rules and processes in place for foreign citizens to apply for work visas, family-based green cards and humanitarian relief, but our federal bureaucracy is overwhelmed. Applications move at a sluggish pace, sometimes leaving people in limbo for more than a decade.

Boosting border enforcement and fixing our case-processing backlog must go hand in hand.

Illegal immigration is a national problem with local implications for governors, county officials and mayors whose communities bear the consequences. These local and state leaders, especially those in non-border states, need to unite across party lines to pressure federal lawmakers to end empty rhetoric about border security and immigration and pursue fair and comprehensive solutions.