Trump plan shifts immigration trajectory
Those with least may suffer most 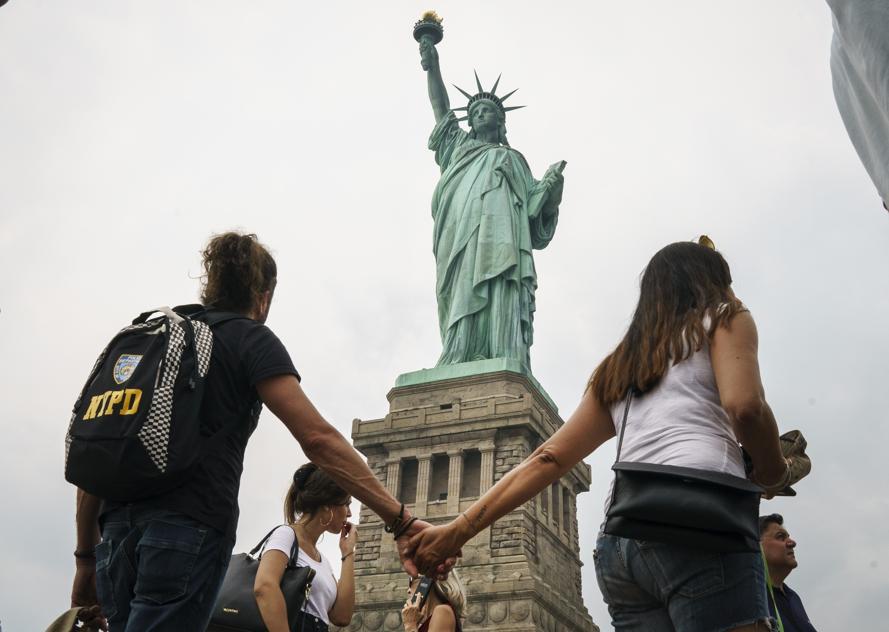 People visited the Statue of Liberty on Liberty Island on Wednesday.

The Trump administration has said the immigration overhaul it announced this week will ensure that new legal residents carry their own weight, without prejudice or favor. Yet the new rule for weeding out those who might be a drain on taxpayers will almost certainly disadvantage poor people from Latin America, Africa, and parts of Asia.

Over time, people who are granted green cards — the major step toward winning citizenship — will become wealthier but their numbers will shrink, researchers predicted. More green cards will go to immigrants with a good education and a measure of self-sufficiency; fewer will be granted simply because someone has a family member in the United States.

Immigrants from Europe and Canada are least likely to face problems under the new regulations, according to one study, which found that, by contrast, nearly three-quarters of recent arrivals from Mexico and the Caribbean have relatively modest incomes that would jeopardize their chances at a green card.

“Never before in our history have we closed off the American dream to strivers who aren’t already middle class,’’ said Doug Rand, who worked on immigration policy in the Obama White House and cofounded a technology company that helps immigrants obtain green cards. “This is an attempt to turn back the clock and dramatically change the face of new Americans.’’

The so-called public charge rule, which denies green cards to immigrants deemed likely to be heavy welfare users, represents a fundamental shift for a nation that has long welcomed impoverished immigrants from around the world who seek a fresh start in a country with more opportunity than where they came from.

There has always been a mix of immigrants, some arriving with skills and investment to make, while others bring little education or money. Immigrants seeking to live and work in the United States permanently may be engineers or construction workers, web designers or farmers, truck drivers or college students.

The new rule — pushed by White House adviser Stephen Miller as a critical piece of President Trump’s America First immigration agenda — aims to reshape that immigrant community. Its backers want fewer poor people who might require public housing and food assistance. They want to turn away sick people whose maladies may end up requiring costly Medicaid services, paid for by the government. And they want to discourage those whose lack of English proficiency could hold them back from succeeding in a competitive economy.

“Give me your tired and your poor who can stand on their own two feet and who will not become a public charge,’ ’’ Kenneth T. Cuccinelli, the director of United States Citizenship and Immigration Services, said bluntly on NPR’s “Morning Edition,’’ adapting the poem on the Statue of Liberty to a more Trumpian view of the country’s duty to immigrants.

Asked later by CNN whether that meant that the Statue of Liberty’s historical invitation to “wretched, poor’’ immigrants was off the table, Cuccinelli clarified. “Well, of course, that poem was referring back to people coming from Europe,’’ he said, “where they had class-based societies, where people were considered wretched if they weren’t in the right class.’’

Beto O’Rourke, a former Democratic congressman from the borderlands of West Texas now running for president, had a swift response on Twitter: “This administration finally admitted what we’ve known all along: They think the Statue of Liberty only applies to white people,’’ he said.

Admitting productive, self-reliant people has long been the objective of US immigration policy.

The Immigration Act of 1891, one of the country’s first moves to regulate entry into the country from abroad, permitted the exclusion or deportation of people deemed to be a burden on the public purse. It referred to “idiots, insane persons, paupers, or persons likely to become a public charge.’’

At Ellis Island, arrivals who were inspected by public health officials and deemed unfit were returned to their country of origin. Steamship lines could be fined for having transported them to the United States. Later, legal immigrant workers from Mexico and China faced similar scrutiny.

Trump from the beginning has demanded an immigration system based on “merit’’ that would favor high-skilled workers over family connections.

The new policy will go into effect on Oct. 15 if it survives numerous legal challenges from immigration advocates.