Krasinski: ‘Hollars’ is all about family
PREVIOUS IMAGE 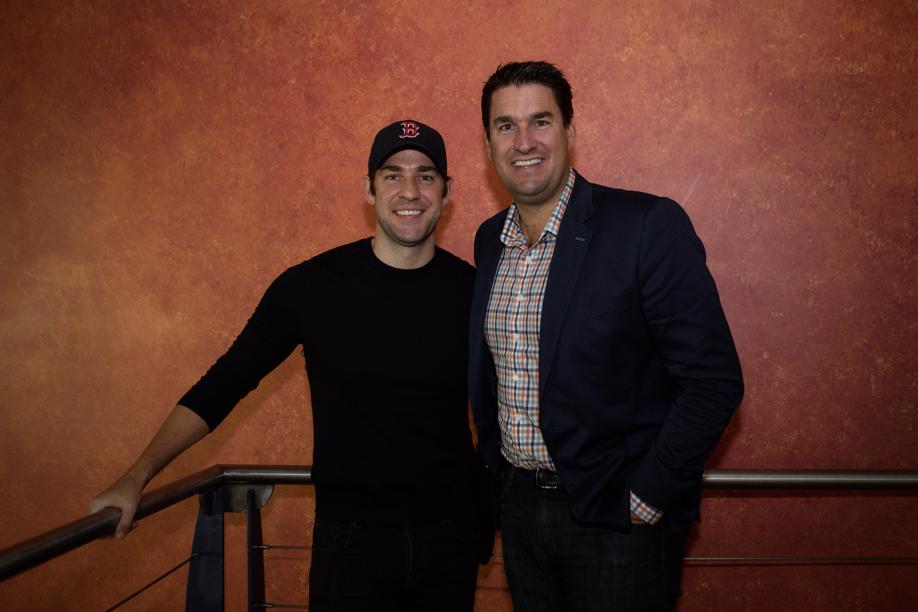 John Krasinski and his brother Paul, after a showing of the new film “The Hollars.’’ (Kayana Szymczak for the Boston Globe)
By Mark Shanahan
Globe Staff

There’s a lot to like about John Krasinski’s new movie, “The Hollars,’’ a smart, understated dramedy about a dysfunctional family dealing with a grim diagnosis. The movie, which Krasinski not only stars in but also deftly directed and produced, features strong performances by a stellar cast. (Richard Jenkins as the droopy dad and Margo Martindale as the mostly-bedridden mom are particularly good.) This weekend, Krasinski, a Newton native, was in Boston to promote “The Hollars’’ — he did Q&As at the Kendall Square Cinema Friday and AMC Loews Boston Common Saturday — and to visit his family, which is very much unlike the maladjusted clan in the movie. We reached him on the phone.

Q. This film had been in the works for several years. Talk to me about how it came together.

A. I was attached first as an actor, about six or seven years ago, and I don’t know if I’ve attached to anything more quickly, to be honest. I wasn’t looking to do a family, but then I read the script and I thought it was one of the most well-written, honest takes on family I'd ever read, so I jumped on immediately. It captured what I think is so special about family — and that’s kind of funny because I come from a very compassionate, loving, communicative family, and yet I got to the end of the script and I was extremely emotional because I thought to myself, ‘This is my family somehow.’ And that’s the magic trick that Jim Strouse, the writer, is able to achieve. They stop being a family in a movie and become projections of your own family.

A. Yes. They have flaws but we all have flaws. What I love most about the movie is that family has an existential pull on you unlike anyone else will in your lifetime — not your girlfriend, not your boyfriend, not your wife or kids, nobody. These are the people who know you best. They share your DNA, and there’s something so loving and open about that. This movie’s really about a family that’s taking the opportunity to tap into those channels of love and communication.

Q. Was it a challenge to both act and direct?

A. This one was sort of a dream job, to be honest. It was very easy to act and direct because the key for me was to make sure the family felt organic and real. And the only way to do that was to be there in the family acting with them. If I was the guy behind the monitor yelling ‘cut,’ it would break the flow in a way that would be disruptive. It almost felt like a play. Margo Martindale said it felt like shooting a home video, which was the best compliment.

Q. Do you have a preference between acting and directing?

A. I’ll always be an actor at heart. It’s my favorite medium to tell stories. But I think directing is such an honor because there’s so much responsibility. You really have to rise to the occasion and know you’re the right person for the job. You want to make sure you have a personal connection to the material that feels unlike anything anyone could have. So if that comes along again. . .

Q. Is it hard sometimes to find good, smart material? I talked to Mike Birbigliaa few weeks ago and he told me he walked into a cineplex recently and there were a lot of movies that weren’t interesting or smart. On what basis do you decide what you do?

A. To me, it’s just a very visceral connection to the material. I cried openly and loudly when I was reading this script, so if I connected in that way I hoped other people would, too. But Mike’s right. There are a lot of distractions in the world, a lot of content, a lot of technology, so in order to grab people’s attention, the studios are doing things with aliens and robots, stuff that’s bigger and faster and brighter. There’s a market for that — I’ll be the first guy to go to those movies because I like being entertained — but I agree with Mike about the appeal of something that’s a little smarter and little more special.

Q. There’s been a whole spate of movies set in Boston in recent years. When you look at Hollywood’s treatment of the place where you grew up, do you recognize it?

A. [Laughs] I do, mostly. I recognize the specific and, sometimes, the more romantic view. I don’t mind either. I think Ben Affleck is great at the specific and then there’s a version of Boston that feels more poetic. I thought Tom McCarthy did a great job in “Spotlight.’’

A. [Laughs] What I’m paying attention to a lot of the time is the Boston accent, which is a little more hit or miss in terms of people getting it right.

A. My brother is truly one of the most interesting, exciting, and inspiring people I’ve ever known. He’s always been the biggest person in the room, both literally and figuratively — he’s 6-foot-9. But he also has an infectious personality that’s made him the most beloved person in every venture he’s been involved with.

Q. Most importantly, though, do you have any thoughts on Tom Brady’s four-game suspension?

A. It’s miserably unjust. The fact that he was penalized this many games for something that’s not nearly as important as what other people should be suspended for is crazy. But I never doubt the team. Whatever happens in those first four games, they’ll be fine.

PREVIOUS ARTICLE
Article 47 of 217
NEXT ARTICLE