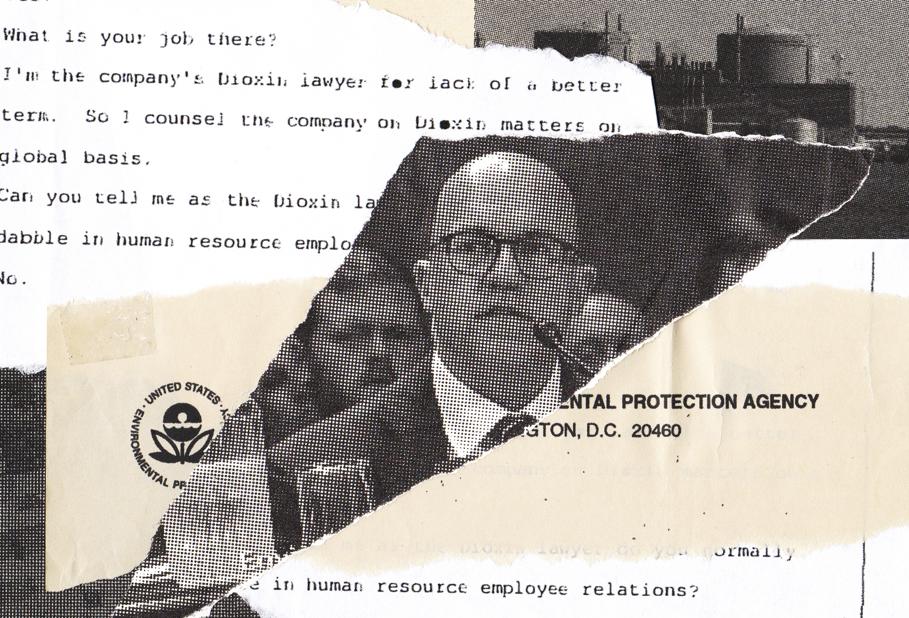 NEW YORK — Peter Wright, the lawyer nominated to run the Superfund toxic cleanup program, is steeped in the complexities of restoring polluted rivers and chemical dumps.

He spent more than a decade on one of the nation’s most extensive cleanups, one involving Dow Chemical’s headquarters in Midland, Mich.

But while he led Dow’s legal strategy there, the chemical company was accused by regulators, and in one case a Dow engineer, of submitting disputed data, misrepresenting scientific evidence, and delaying cleanup, according to internal documents and court records as well as interviews with more than a dozen people involved in the project.

Wright was nominated in March by President Trump to be assistant administrator at the Environmental Protection Agency overseeing the Superfund program, which was created decades ago to clean up the nation’s most hazardous toxic waste sites.

He is working at the agency in an advisory role as he awaits congressional approval. If confirmed, Wright would also oversee the emergency response to chemical spills and other hazardous releases nationwide.

EPA officials pointed to Wright’s expertise in environmental law and his tenure at Dow as valuable qualifications. The White House on Saturday referred questions to the EPA.

He spent 19 years at Dow, one of the world’s largest chemical makers, and once described himself in a court deposition as “the company’s dioxin lawyer.’’

He was assigned to the Midland cleanup in 2003, and later became a lead negotiator in talks with the EPA. It was during his work on the cleanup that the agency criticized Dow for the cleanup delays, testing lapses, and other missteps.

For more than a century, the Dow complex manufactured a range of products including Saran wrap, Styrofoam, Agent Orange, and mustard gas. Over time, Dow released effluents into the Tittabawassee River, leading to dioxin contamination stretching more than 50 miles along the Tittabawassee and Saginaw rivers and into Lake Huron.

Dow, which merged with rival DuPont last year, is among the companies most affected by Superfund cleanups nationwide, EPA data shows. The combined company is listed as potentially having responsibility in almost 14 percent of sites on the EPA’s list of priority Superfund cleanups, or 171 locations nationwide.

Wright has pledged to recuse himself from cleanups related to his former employer, a move welcomed by even one of the administration’s congressional critics.

Dow finally came to terms with the EPA in 2010, during the Obama presidency, and a cleanup is underway that cost Dow $24 million last year. “Peter was notable for his professionalism, candor, cordiality, and grace under pressure,’’ said Leverett Nelson, an EPA regional counsel who worked with Wright on that agreement.

EPA officials also stressed that Wright’s recusal wouldn’t restrict him in the job, since he would still be able to work on the vast majority of Superfund sites. They also credited Wright with helping to forge the eventual cleanup agreement in Michigan.

In a statement, a Dow spokeswoman, Rachelle Schikorra, described Wright as “a highly skilled and conscientious attorney who provided valuable guidance to Dow on environmental compliance matters for almost 20 years.’’

She said Wright retired in June and the company had no role in his nomination. Wright referred questions to the EPA.

The Superfund program began in 1980 as an ambitious effort to fix thousands of toxic sites — factories, chemical dumps, abandoned mines — left scattered across the US landscape in the age of industrialization.

It grapples with profound complexities: Companies disappear or change hands, and the science on toxicity and cleanup methods is often contested, making progress contentious and uncertain.

Wright, who was on a high-level team at Dow negotiating the Midland cleanup, has pointed to his work on the site as his biggest accomplishment.

In a 2017 e-mail to the EPA’s chief of staff, made public in June as part of an environmental group’s lawsuit, Wright called it “the most controversial matter and the single most publicly successful matter that I have worked on at Dow.’’

But the progress came after years of pushback.

In one instance, in 2006, an independent testing company hired to validate Dow’s data on contamination levels rejected the numbers over incomplete information, which increased the risk of “false negatives’’ that might leave contaminants undetected, according to a deposition given by a technician at the lab in 2008.

The EPA also said in an August 2007 memo that “Dow has frequently provided information to the public that contradicts agency positions, and generally accepted scientific information.’’ A Dow newsletter mailed to residents in 2004 stated that few health effects were associated with dioxin exposure, citing a health study of Dow workers that the EPA took issue with.

In 2004 and 2005, state and federal officials discovered Dow contractors collecting soil samples in the local watershed without telling regulators, which violated a Dow license, according to documents released to a local environmental group, Lone Tree Council, under the Freedom of Information Act.

PREVIOUS ARTICLE
Article 13 of 197
NEXT ARTICLE