Veterans, near and far, honored for their service
PREVIOUS IMAGE 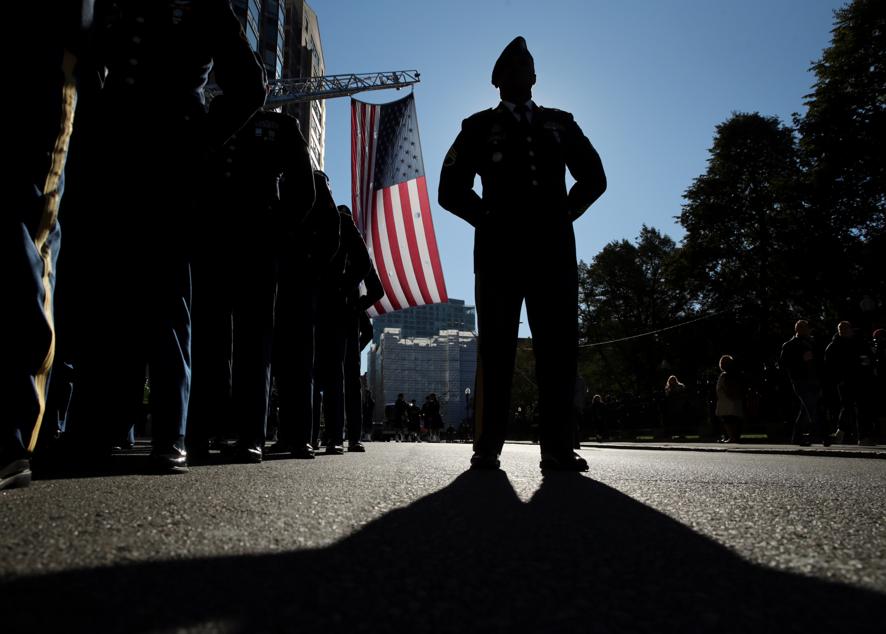 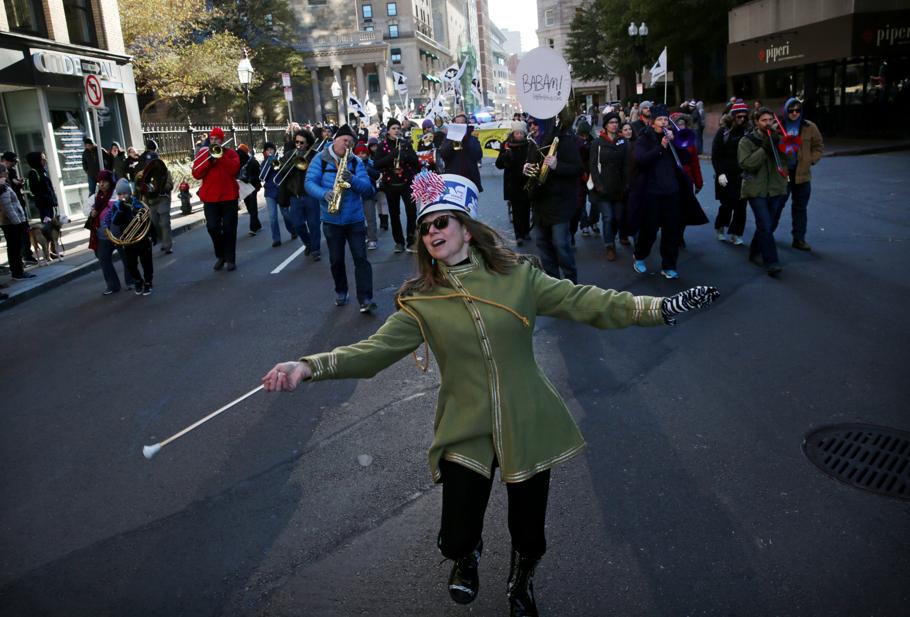 Joanne Piazzi of the Leftist Marching Band led the Boston Area Brigade of Activist Musicians during the Veterans for Peace parade.Antonio Molina of Roxbury offered remarks at the South End ceremony sponsored by the Puerto Rican Veterans Monument Association to honor contributions of Puerto Rican service members in the Armed Forces. “It shows respect, which is what we deserve, because we’ve been fighting for this country since the Revolutionary War,’’ Molina said. He had served as a Marine Corps sergeant in Vietnam, Also Saturday, Governor Charlie Baker and US Senator Elizabeth Warren unveiled a plaque dedicated to those killed or wounded in action. (Photos by Craig F. Walker/Globe Staff) 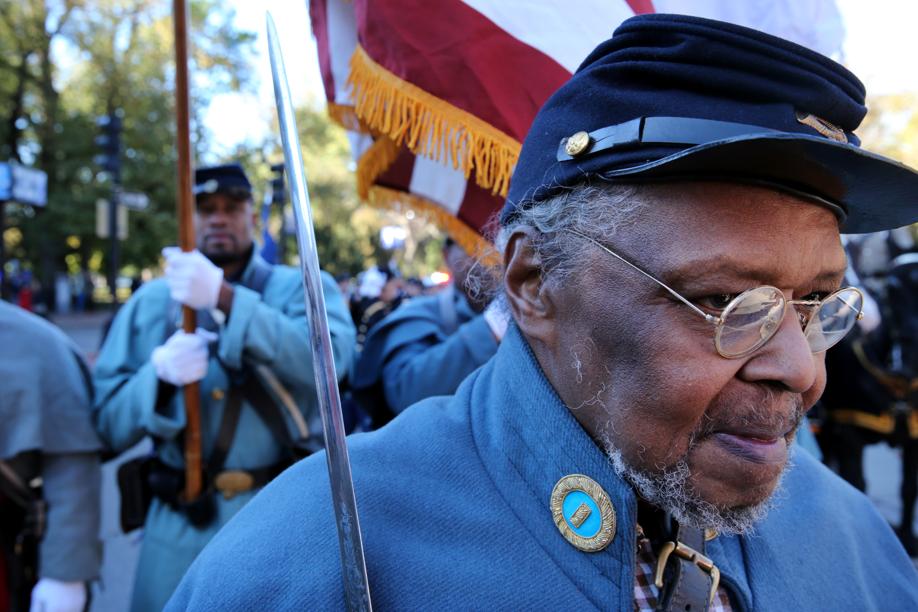 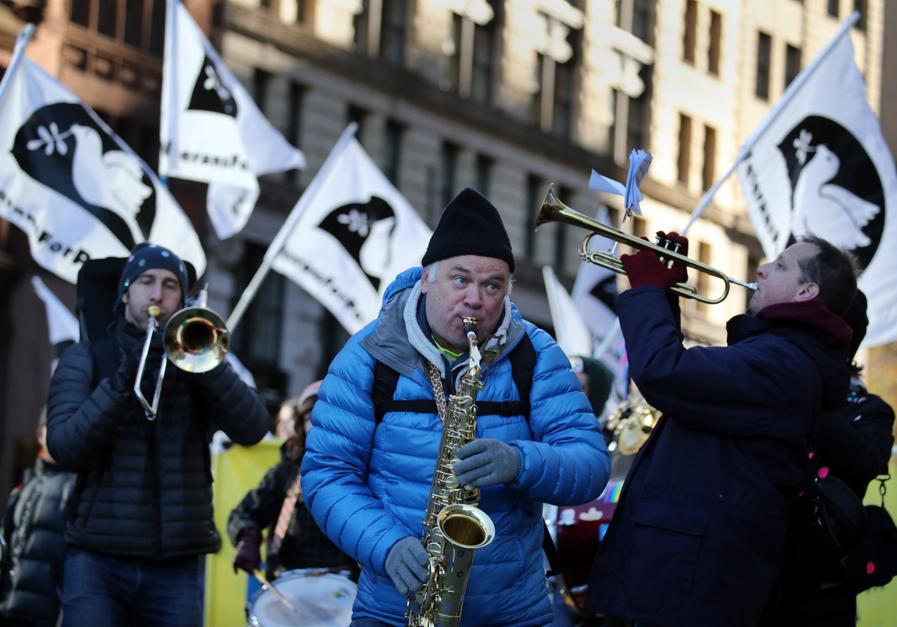 Doug Spalding played saxophone with the Boston Area Brigade of Activist Musicians during the Veterans for Peace parade. 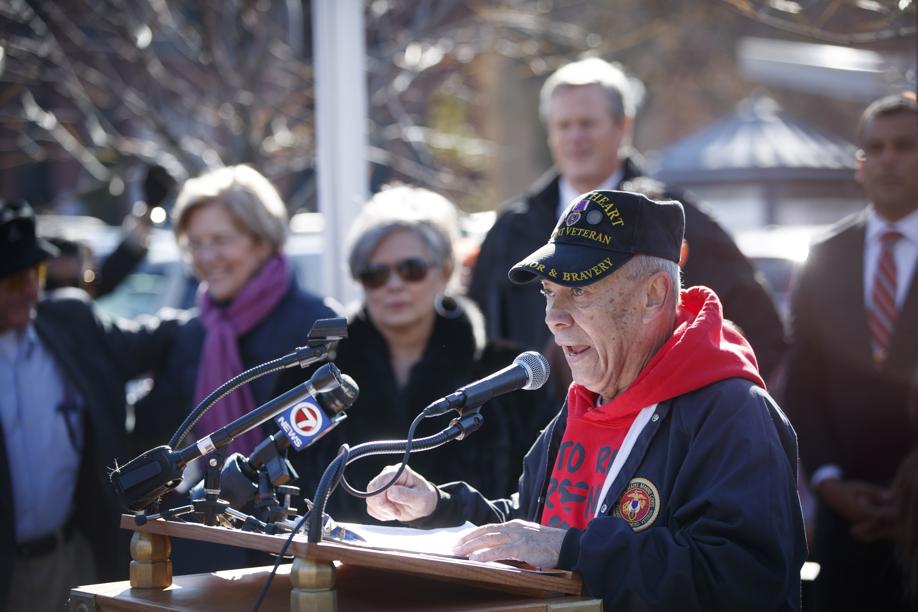 City, state, and federal officials gathered Saturday to honor a community that has shouldered a heavy portion of the nation’s military burden, as many of its members continue living without electricity, access to medical care, or the ability to earn an income.

About 100 people stood shivering in near-freezing temperatures at the unveiling of a plaque in Boston’s South End honoring Purple Heart recipients at Puerto Rican Veterans Monument Square, where many speakers acknowledged the challenges facing residents of the US territory after it was hit by successive hurricanes nearly two months ago.

“Here, in front of this memorial, we recognize the tens of thousands of Puerto Ricans who have defended the United States in conflicts large and small throughout our country’s history,’’ said US Senator Elizabeth Warren, who told the crowd that her three brothers had served in the US military.

“From Army Lieutenant Teófilo Marxuach, who ordered the firing of the first American shot in World War I, to the 65th Infantry Regiment, the ‘Borinqueneers,’ to the more than 10,000 men and women who have volunteered to serve since 9/11, Puerto Ricans . . . have served our armed forces with honor and with distinction,’’ said Warren.

Puerto Ricans fought alongside colonists in the American Revolution and since the island became a US territory in 1898, roughly 200,000 of its people have fought as citizens in every major military conflict, including the Korean War, where the Borinqueneers distinguished themselves in battles against the Chinese, according to the US Department of Defense.

In his speech at the square, where the nation’s first statue honoring Puerto Rican women and men who served in the military was unveiled four years ago, Governor Charlie Baker acknowledged the devastation that hurricanes Irma and Maria wrought in Puerto Rico.

He said Massachusetts Family Resource Centers have provided support to about 900 Puerto Rican families in the wake of the storms, and about 700 children from the island have enrolled in Bay State schools.

The state Legislature will work to provide affected school districts with additional funding through a bill expected to be filed after the holiday break, the governor said.

Baker also spoke of the sacrifices made by service members and their families.

“One of the worst jobs I have as governor of the Commonwealth is to meet a family that’s greeting the remains of their son, daughter, brother, sister, mom, dad when they come back home,’’ Baker said.

“Thankfully I’ve only had to do it about half a dozen times, but it breaks my heart every time I do it.’’

Baker said when he has approached the grieving family of a service member killed in the line of duty, “those families have always expressed appreciation for his time and attention.’’

“Even in a moment of such horrible anguish and tragedy, their spirit and their generosity shows through,’’ he said.

The South End event was one of hundreds around the state and across the nation honoring veterans for their service to the country.

Earlier in the day, Baker and Francisco A. Ureña, the state’s secretary of Veterans’ Services, spoke at a State House event that drew a standing-room-only crowd, Ureña said.

And while officials gathered in the South End to honor Puerto Rican veterans, the city’s annual Veterans Day Parade was making its way from Boston Common to City Hall Plaza, followed by an antiwar parade organized by Veterans for Peace.

That parade concluded outside Faneuil Hall, where members of the organization waved flags and sang Woody Guthrie’s “This Land is Your Land,’’ as the Boston Area Brigade of Activist Musicians played the tune.

In the South End, State Representative Jeffrey Sanchez, who is of Puerto Rican descent, remembered his father, a World War II veteran, and thanked Baker and Mayor Martin J. Walsh for supporting the Massachusetts United for Puerto Rico Fund, which has raised more than $2.3 million for relief efforts.

Saturday was an emotional day for Antonio “Tony’’ Molina, president of the organization that built the monument for recipients of the Purple Heart and the square’s other memorials, as Baker presented him with a citation for his work.

“I feel so honored and so grateful on behalf of the Puerto Rican veterans,’’ said Molina, 75, in an interview after the ceremony.

He said it was especially meaningful to have Warren, Baker, several Boston city councilors, and other government officials attend the event.

“It shows respect, which is what we deserve, because we’ve been fighting for this country since the Revolutionary War,’’ said Molina, who left the Marine Corps as a sergeant in 1965 after serving four years and surviving a head wound in Vietnam, for which he was awarded the Purple Heart.

“I wanted to be a lifer, but when they shot me in the head, they sent me home,’’ said Molina. “My lieutenant said to me, ‘Thank God you’re Puerto Rican — you’re hard-headed anyway.’ ’’

PREVIOUS ARTICLE
Article 33 of 230
NEXT ARTICLE