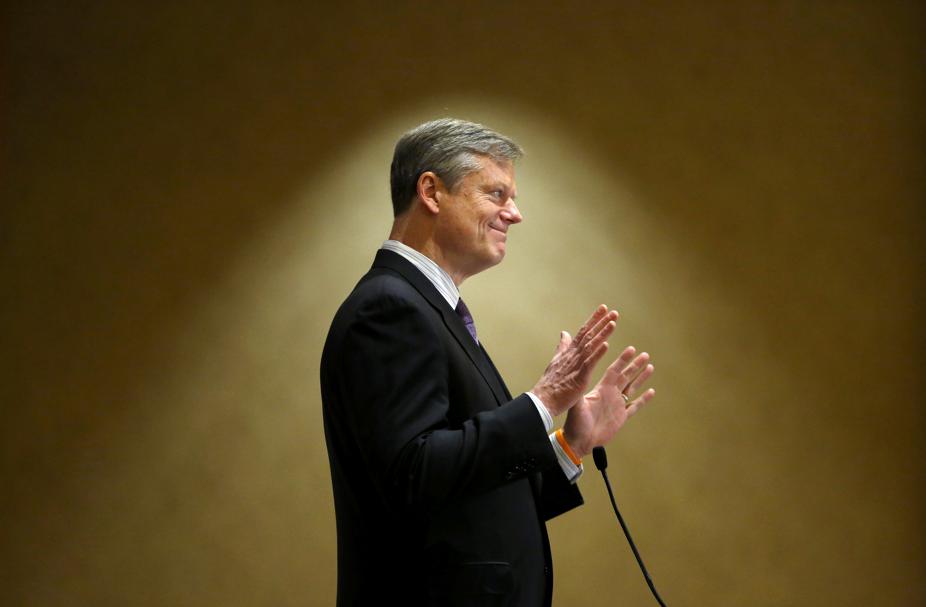 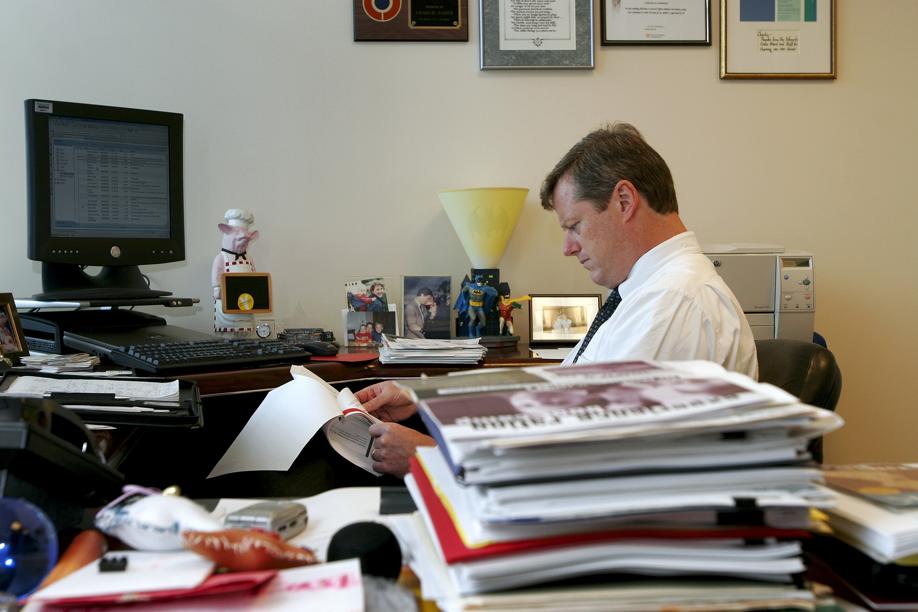 As the former head of Harvard Pilgrim Health Care, Governor Baker (above) has been seen as friendly to businesses. But as a result of the soaring expense of MassHealth, last month he unveiled a proposal to penalize companies that don’t offer workers adequate health insurance. Many companies that offer health plans could also be hurt by penalties against those that fall short of an 80 percent participation mandate. Steve DeFillippo (right) of Davio’s restaurant group says he offers insurance to full-timers but only 55 percent take it. (Briana Moore)
By Jon Chesto
Globe Staff

Governor Charlie Baker became one of the business community’s biggest allies on Beacon Hill the moment he moved into the State House two years ago. As the former head of Harvard Pilgrim Health Care, he knows what executives want out of government — as little interference as possible, and definitely no new expensive mandates.

But for the first time, a major rift has opened up between business leaders and the Republican governor. Baker has been backed into a corner by the soaring expense of MassHealth, the state’s publicly subsidized health insurance program for lower-income residents. MassHealth now accounts for about 40 percent of the state budget, and he fears that even more people will choose it over their employer’s coverage.

To help keep that from happening, the governor last month unveiled a measure that would penalize companies that don’t offer adequate health insurance to their workers.

Baker’s plan — which could pump $300 million into the state’s budget for the next fiscal year — also would snare many companies that offer generous health plans by penalizing those that fall short of a new 80 percent participation mandate. Business groups say most companies don’t meet that goal, in part, because many workers get their insurance through a spouse or parents.

“From any administration that’s got [an] ear to the business community, that’s a surprising proposal,’’ said Peter Ubertaccio, a political science professor at Stonehill College in Easton.

The blowback from business lobbyists has prompted a few of Baker’s top aides, including budget chief Kristen Lepore and health and human services secretary Marylou Sudders, to start negotiating with them on an alternative.

“We’re hopeful that we can maybe all roll up our sleeves and find something that’s a little fairer to the business community,’’ said Christopher Geehern, an executive vice president at Associated Industries of Massachusetts, a trade group. “You really are hitting employers who provide health insurance, who are doing what they’re supposed to be doing, as opposed to targeting those employers who aren’t providing health insurance.’’

The goal is to have an alternative option ready by April, when House leaders take up the budget. Representative Jeffrey Sanchez, a House point person on health care issues, said Baker’s plan requires more analysis to better understand its effects. Sanchez notes that it’s important to recognize the uncertainty surrounding federal health care reimbursements, now that President Trump and the Republican-led Congress are moving to undo the Affordable Care Act.

MassHealth enrollment rose about 3 percent in the past year, to more than 1.9 million people, or about one in four Massachusetts residents. Meanwhile, the state’s MassHealth costs rose from $13.7 billion to $14.1 billion, according to figures provided by the Baker administration. (This state spending is typically matched by federal funds.)

The big surge in enrollment started showing up by 2014, before Baker took office. That’s also around the time when the “fair share assessment’’ — a provision of the 2006 Massachusetts health care overhaul — was repealed. The assessment, which went away in mid-2013, was aimed at employers who didn’t do their part to offer adequate insurance. There was an assumption that the Affordable Care Act would invoke a similar rule, but that never happened. MassHealth enrollment quickly ballooned as many workers sought cheaper coverage, state officials said. Participation grew from 1.4 million in 2013 to nearly 1.9 million in 2016.

One of the biggest drivers for the increase, according to the business-backed Massachusetts Taxpayers Foundation, is that the Affordable Care Act vastly expanded eligibility for MassHealth by allowing income-eligible adults without children to participate. That change took effect in January 2014.

There’s another possible culprit. The original state plan that passed while Mitt Romney was governor prevented income-eligible workers who had access to an employer-sponsored plan from choosing state-subsidized insurance instead. But that restriction went away with the advent of the Affordable Care Act.

Business leaders say Baker’s version of the assessment is vastly different from the one put in place under the Romney administration. Instead of paying a $295 per employee penalty as the old regulation called for, companies would be hit with a $2,000-per-employee charge if they don’t provide coverage that meets state standards. Companies whose health insurance participation rate is under 80 percent would have to pay the $2,000-per-worker fee for the amount of employees they would need to reach the threshold. Only businesses with fewer than 11 employees would be exempt.

Many companies expect to pay fees that total in the hundreds of thousands of dollars a year, according to business groups, and some could be on the hook for more than $1 million.

Steve DiFillippo, chief executive of the Davio’s restaurant group, said he offers health insurance to full-timers after they’re on the payroll for at least 90 days. He said he pleads with some of his 400 Massachusetts workers to sign up for the company’s health insurance plan but recognizes some younger employees stay on their parents’ plans until they’re 26 years old and then opt to go without any coverage.

He estimates that the participation rate in his plan is about 55 percent, far short of the 80 percent Baker would require. That means the new regulations, as proposed, would cost him a lot of money.

“Why is it that I get in trouble?’’ DiFillippo said. “What they’re trying to do is to push me to spend more. I think that’s wrong.’’

Greater Boston Chamber of Commerce chief executive James Rooney has a similar opinion. He says the proposed assessment, which he calls a tax, could punish employers trying to do the right thing. But Rooney also said there’s some wisdom behind Baker’s strategy — it underscores the pressure that MassHealth is putting on state finances.

“A blanket . . . tax on companies that employ people, in and of itself, is not a solution,’’ he said. “[But] tactically putting it out there is smart, even if you disagree with it. Shining a brighter light on the problem is the right thing to do.’’

The Baker administration backs up its argument with a chart that shows a 16-percent increase in full-time workers between 2011 and 2015 who were not on employer-sponsored insurance. The Massachusetts Taxpayers Foundation has launched its own research to pinpoint the reasons for surging MassHealth costs.

“What the administration was implying was that employers were cutting back on their coverage,’’ said Eileen McAnneny, the group’s president. “The MTF is questioning the causal link that the administration is suggesting between the growth in MassHealth and the drop of employer-sponsored insurance.’’

Christopher Anderson, president of the Massachusetts High Technology Council, warns that an assessment could send the wrong message to businesses considering moving to Massachusetts or expanding their operations here.

“We run the risk through a whole series of new developments to return closer and closer to the ‘Taxachusetts’ moniker that we’ve worked so hard to minimize over the last 10 years,’’ Anderson said.

The disagreement between Baker and business leaders, though serious, probably won’t make them adversaries. The governor received a warm reception when he spoke before a Greater Boston Chamber of Commerce gathering Thursday, although he didn’t focus on the new assessment in his speech.

“I don’t think this is an issue that will prompt the business community or business interests to walk away from this governor,’’ said Ubertaccio, the politics professor at Stonehill. “You’re not always going to see eye-to-eye with the main groups in your coalition, but they’re willing to give you some leeway.’’

PREVIOUS ARTICLE
Article 79 of 228
NEXT ARTICLE