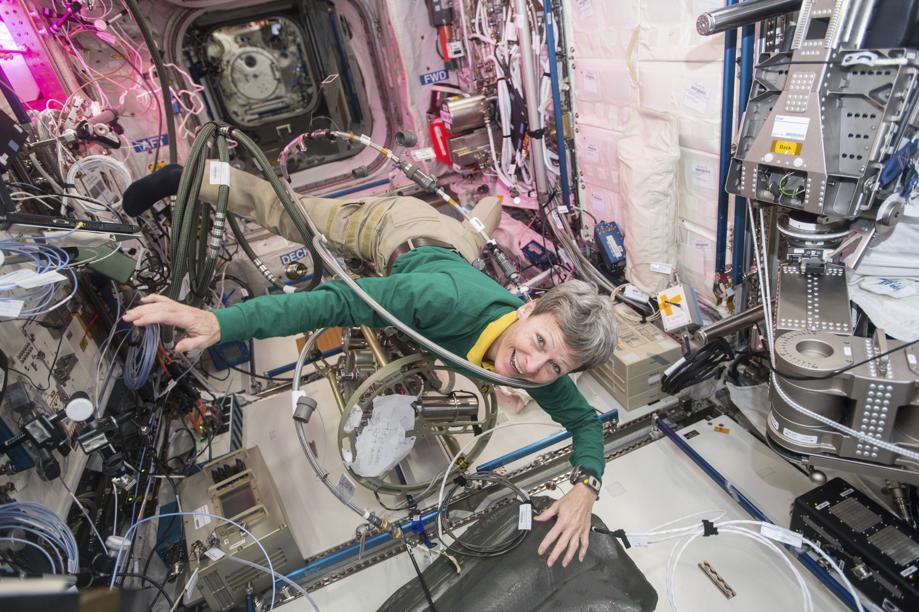 CAPE CANAVERAL, Fla. — Astronaut Peggy Whitson has completed a space streak unmatched by any other American.

The world’s most experienced spacewoman was returning to Earth on Saturday night after 9½ months at the International Space Station. Counting all her flights, she will have logged 665 days in space — the equivalent of more than 1½ years.

First stop Saturday night was Kazakhstan, the usual landing site for a Russian Soyuz capsule. She was then scheduled to travel to Germany to board a NASA plane before heading home to storm-crippled Houston.

During her third and latest mission, which began last November, the 57-year-old biochemist became the oldest woman in space. She performed her 10th spacewalk, more than any other woman. And she became the first woman to command the space station twice.

Before Saturday’s landing, Whitson said she was looking forward to pizza — and flush toilets. ‘‘Trust me, you don’t want to know the details,’’ she said via e-mail in response to questions. A formal news conference was canceled earlier in the week because of the storm.

She said her home in Houston is fine, but so many friends and co-workers were not as fortunate.

Johnson Space Center in Houston remains closed until Tuesday except for essential personnel, such as those staffing Mission Control for the space station. She said the team was sleeping on cots at the space center at one point.

‘‘Any trepidations I might have about returning in the aftermath of a hurricane are entirely eclipsed by all those folks keeping our mission going,’’ she said.

Most of the flight went by quickly, she noted, although the last week has seemed to drag by.

‘‘Once the switch is thrown to go home, time seems to move a lot slower,’’ she wrote.

Whitson said she will ‘‘hugely miss the freedom of floating and moving with the lightest of touch, especially those first few days after my return.’’ She also will miss ‘‘the ability to ‘go for a walk’ in a spaceship built for one,’’ a reference to her spacesuit, and seeing ‘‘the enchantingly peaceful limb of our Earth’’ from on high.

‘‘Until the end of my days, my eyes will search the horizon to see that curve,’’ she wrote.

This flight alone lasted 288 days, much longer than intended. A seat opened up on a Soyuz capsule, and NASA took advantage of it to keep her in orbit three extra months. Only one other American — yearlong spaceman Scott Kelly — has spent more time off the planet in a single shot.

Russians still hold claim to the world’s space endurance and spacewalking records. Cosmonaut Fyodor Yurchikhin, who is returning with Whitson and new US astronaut Jack Fischer, will have 673 days under his space belt once he is back on the planet, accumulated over five missions. Yurchikhin and Fischer arrived at the orbiting lab in April.

Whitson said she could have stayed in orbit longer and that exercise equipment up there is better than ever for keeping bones and muscles strong. She has been an astronaut since 1996 and is married to a fellow biochemist, Clarence Sams, who works at the space center.

Raised on a farm in Iowa, Whitson enjoyed growing vegetables on the space station, all part of scientific research, and especially enjoyed sampling some of the results. After so long in space, she longed for fresh produce and did her best to jazz up the freeze-dried and just-add-water space meals.

Last month, Whitson posted a photo of herself on Twitter, ‘‘soaking up some sunset time’’ in the space station’s observation deck. ‘‘638 days in space and the view is still amazing!’’ she tweeted.

What’s next for Whitson? ‘‘I am not sure what the future holds for me personally, but I envision myself continuing to work on spaceflight programs,’’ she said. She also plans on ‘‘paying forward some of the advice and mentoring that I received on my journey.’’

PREVIOUS ARTICLE
Article 10 of 182
NEXT ARTICLE