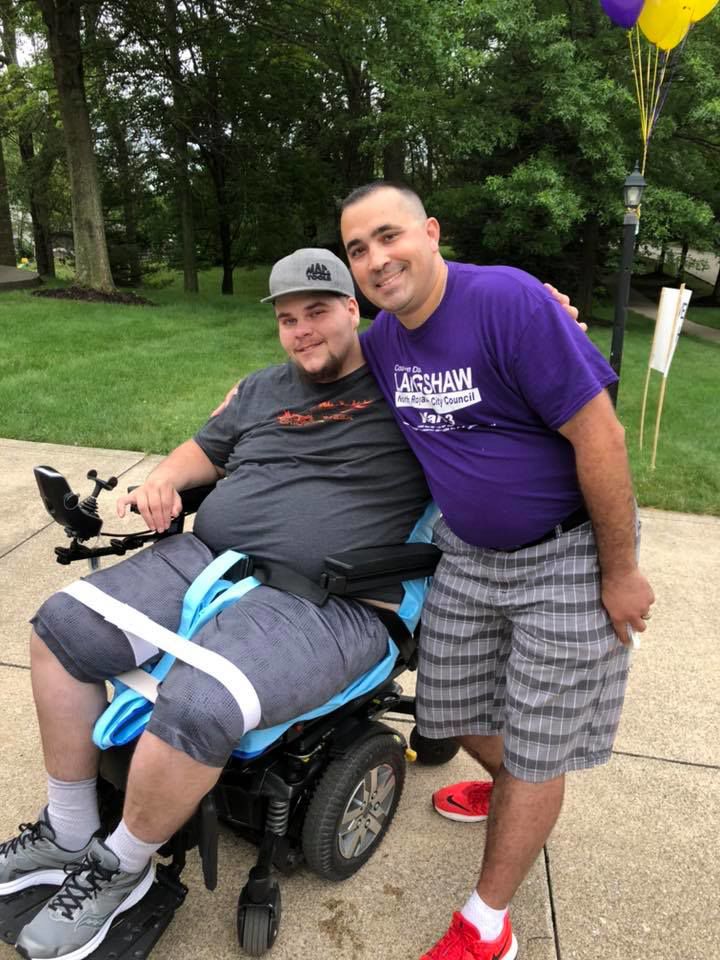 Ward 3 Councilman Dan Langshaw (right) will be hosting his free annual Ward 3 Picnic in support of Joseph “Jojo” Keider (left) and his recovery. He is encouraging ward 3 residents to attend and donate to the family to assist Keider, 23, who was involved in a horrific car-motorcycle collision back in April on York Road that has left him with ongoing medical needs. Submitted photo
PREVIOUS IMAGE


NORTH ROYALTON – As most anyone who calls North Royalton home knows, this town is known for taking care of its own.

In April, Joseph “Jojo” Keider, 23, was involved in a horrific motorcycle accident in which he sustained a broken neck, a spinal cord injury, a displaced cervical vertebra, a severely broken pelvis, a laceration to his foot and cuts, bruises from head to toe and was left without sensation from the armpits down. He was hospitalized for 100 days.

The car-motorcycle collision was alleged to have been caused by a motorist believed to be impaired at the time.

Friends, family, neighbors and community members rallied behind JoJo, raising thousands of dollars at a benefit for him May 26.

Jojo is now recovering at home doing in-house therapy, and though a bit of his sensation has returned in his chest, he still does not have feeling in his legs. Regardless, his family remains hopeful and positive in the face of adversity. They say there have been ups and downs but mostly ups.

“We are doing everything we can so when movement starts to come back, if it does, his body will be able to do things with it. The process is very long,” his father Mark said.

The hope is to purchase a van soon to transport him to outpatient therapy where “the good stuff happens,” Keider added.

“His improvement comes in his attitude, taking every day as it comes, and with rehab lifting weights now. Right now, he can’t grip onto anything, so we have a weight bar and we strap him in with bandages. Other progress is doing exercises every day, getting his core stronger. His friends still come over and are very supportive. We went to a wedding two weeks ago and that was his first time in a social environment navigating a large crowd,” Mark Keider said.

Now, Ward 3 Councilman Dan Langshaw is reaching out and encouraging his ward to come together for the Keider family, who are fellow ward 3 residents, during his 4th annual Ward 3 Picnic in the Park. The event will be hosted from 1-3 p.m. Aug. 31 at Memorial Park.

All ward 3 residents are invited to attend the free event featuring food, games, balloon art entertainment, sno-cones, appearances by North Royalton safety forces and a chance to meet and fellowship with neighbors of the ward, including the Keider family, which will be there.

Each year Langshaw selects a local charity or cause to support at the picnic and has chosen the Keiders. He is encouraging picnickers to make a donation during the event to help support this family and Jojo’s ongoing recovery.

“Ward 3 residents like Joe have become an extended part of my family. I visited him in the hospital, and since then, have been trying to help him through this difficult time because that’s what makes us great in ward 3 and North Royalton,” he said. “We step up to help our fellow neighbors when they are in need, like our families.”

Mark Keider said it means a great deal to his family having Langshaw’s support and the support of the entire community.

“Having Dan’s ear and his interest in Joey, it’s been very helpful just from the standpoint of Joey’s emotional recovery,” Mark Keider said. “It’s been very good for him to know someone on city council, in the city of North Royalton, is looking out for him and is worried about him.”

Langshaw is also working with the Keiders to help raise awareness about motorcycle and motor vehicle safety in hopes to save lives in the community. During his picnic, Polaris Career Center will have helpful information about this topic.

Residents can still donate to the family through a GoFundMe page that has currently raised more than $15,500 of a $20,000 goal. Visit gofundme.com/f/jojo-keider-recovery-fund for more information.