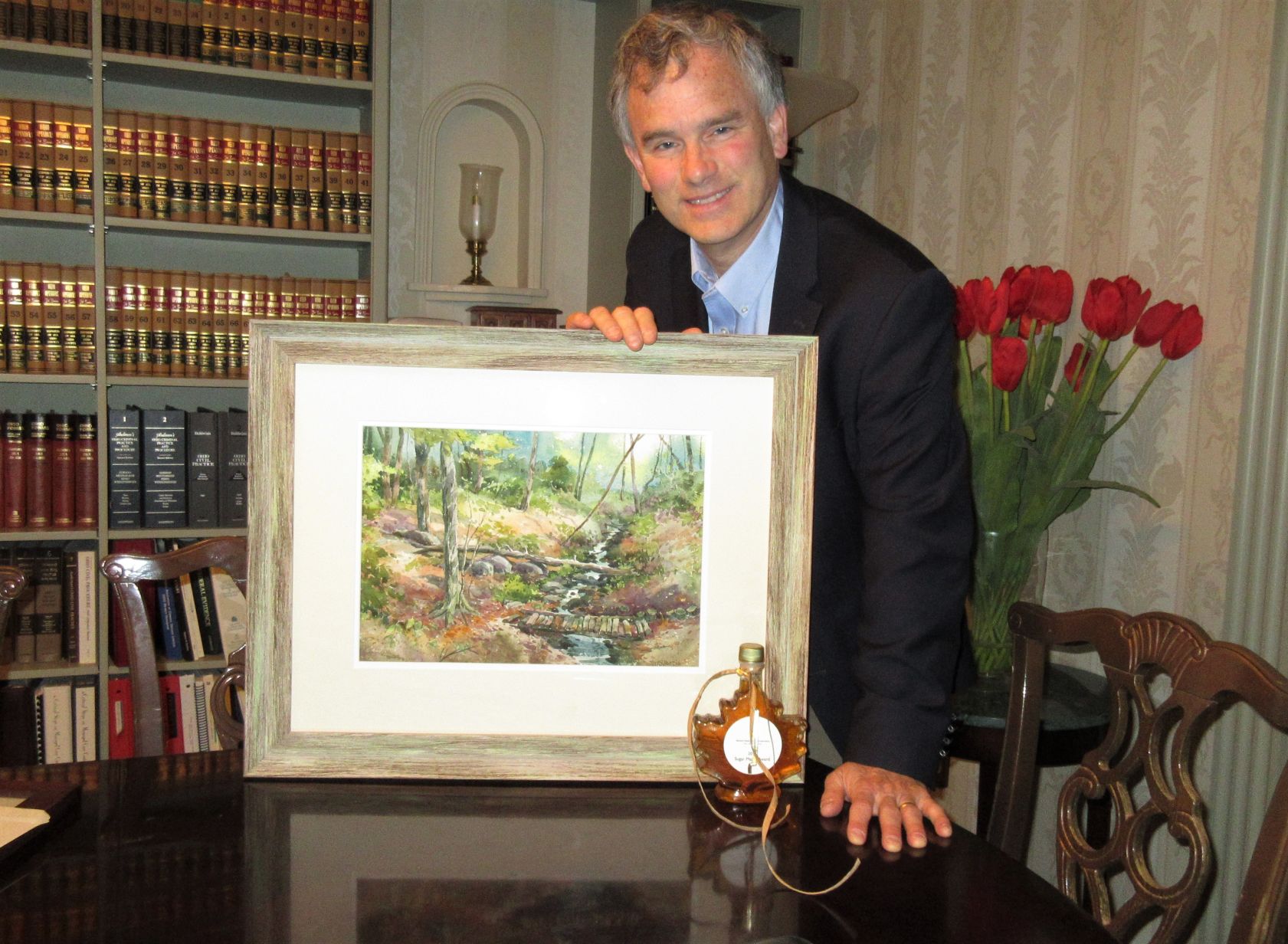 Attorney Jeff Holland displays the painting of a scene on his Frog Hollow Farm, which was presented to him when he was given the Sugar Maple Award by the Western Reserve Land Conservancy. Photo by GLENN WOJCIAK
PREVIOUS IMAGE

His efforts to preserve land from development recently earned him an unusual honor, the Sugar Maple Award presented by the Western Reserve Land Conservancy. It’s the highest honor bestowed by the Land Conservancy which has worked to place conservation easements on 56,000 acres of land in Northeast Ohio including 1,300 acres in Medina County.

Holland earned the award through dedicated service on the board of the land conservancy and by establishing an easement that prevents future development of 43 acres of his own land on State Road in Sharon Township.

His law firm which operates from an historic home on the circle in Sharon Center is dedicated to conservation and the protection of animals, two specialties not commonly found in other law offices around the state. Many know Holland for his work with humane societies which often appoint him to prosecute animal cruelty cases in court.

Holland has acted as a prosecutor on cruelty cases brought by the Medina County Society for the Protection of Animals as well as other humane societies around the region and state.

Holland grew up in Rustic Hills in Montville Township, graduated from Highland High School in 1979 and Denison University in 1983. His career path was launched at the New Hampshire University School of Law where he met Marjorie Muriden who became both his wife and the partner of his law firm.

Holland said he met Muriden when a group of new students were talking about why they went to law school and she said: to protect animal.

“I thought that was just great and I was hooked,” Holland said. They have been married 31 years now and have four sons, the oldest a recent law school graduate and the youngest about to enter Highland High School.

They live on about 100 acres which they refer to as Frog Hollow Farm where they have three dogs, four cats, six horses, a kennel for rescue dogs and a barn to provide a foster home for additional horses and a mule taken in and offered for adoption by the nonprofit Maggie’s Mission which Muriden is devoted to.

Holland feels his role in preventing animal cruelty is vital work but does not equal the impact of his conservation efforts.

“A hundred years from now the things I’ve done will be forgotten but the land will still be here,” Holland said.

He compares development in Northeast Ohio to a slow-moving glacier that eats up the land. He says the spread of new homes and stores will completely engulf Medina County if not checked.

“People like Medina County because of the farms and natural areas that make it beautiful,” Holland said. “The landscape is changing and its up to our generation to do something or it will be lost forever.”

The land conservancy helps by convincing people to voluntarily place deed restrictions on their land that preserve it as a farm or undeveloped natural area.